Sophie Bell is an Associate Professor at St. John’s University’s Institute for Writing Studies. She teaches a first year writing course titled “Race, Language, and Writing.” She studies the intersections among American literature, education, race, and culture in nineteenth-century and contemporary contexts. Two of her essays explore antebellum literary representations of children's sentimental educations through a focus on race: “‘So Wicked': Revisiting Uncle Tom's Cabin's Sentimental Racism through the Lens of the Child," (published in the volume The Children’s Table: Childhood Studies and the Humanities, University of Georgia Press, 2013) and “Misreading The Scarlet Letter: Race, Sentimental Pedagogy, and Antebellum Indian Literacy” (Studies in American Fiction Spring 2015). Her essay, “‘Whiteboys’: Autoethnography, Internalized Racism, and Composition at the University’s Gateway" (forthcoming in the volume Anti-Racist Activism: Teaching Rhetoric and Writing, WAC Clearinghouse and Parlor Press) comes from her research into the racial dynamics of language in her university students' writing. Her current project looks at her students' use of writing to increase their cultural competence in diverse classrooms.

Personal Experience and Public Writing in Schools and Other Institutions

Review of High Schools, Race, and America’s Future: What Students Can Teach Us about Morality, Diversity, and Community, Lawrence Blum. Radical Teacher 101 (2015).

“What Does 'The Personal is Political' Mean in a Writing Classroom?: Searching for a Qualitative Methodology.” Qualitative Methods Research Roundtable, Conference on College Composition and Communication. Las Vegas, NV March 2013. Co-presented with Amanda Moulder.

“’No One Cares for Me Only to Get My Work’: Child Labor, Mischief, and Sympathy in Harriet Wilson’s Our Nig.” Modern Language Association Convention, San Francisco, CA December 2008.

“Infanticide and the Politics of Mourning in James Fenimore Cooper’s The Last of the Mohicans.” American Literature Association, Cambridge, MA  May 2005.

“Why Is There a Cowboy on the Cover of Chang-rae Lee’s Native Speaker?.” American Literature Association, Cambridge, MA  May 2003. 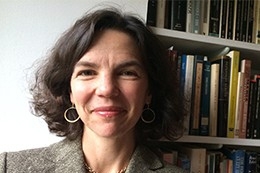