Prof. Adolphe moved from Calgary, Canada to New York City in 1992 to attend the School of Visual Arts where he received his MFA in 1994. Prof. Adolphe’s illustrations have been reproduced in numerous national and international publications. His paintings have been featured in over forty exhibitions since 1998 throughout the United States and internationally. He is currently represented by several galleries throughout North America. Before joining the faculty at St. John’s University, Art Department he taught for several years at The Maryland Institute, College of Art in Baltimore, MD. In 2010 he was promoted to the rank of Professor. He lives with his wife and children in New Haven, CT. 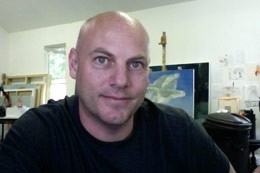