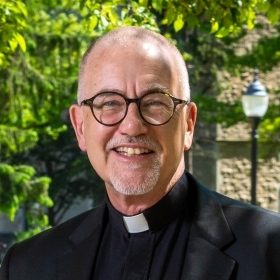 Rev. Aidan R. Rooney, C.M., M.Div., M.Th. ’78NDC has been a member of the Congregation of the Mission since 1980. A native of Staten Island, NY, Fr. Rooney was first exposed to the Vincentian charism as an undergraduate at the Staten Island, NY, campus of St. John’s University, where he was active in Campus Ministry and earned a bachelor’s degree in English in 1978. He was ordained a Vincentian in 1984.

During almost four decades of priestly ministry, he has served in various positions in the Eastern Province of the Congregation, including parish vocation and young adult ministry, teaching graduate-level students, and working professionally in statistics and data analysis. He served in the Congregation’s international mission in El Alto, Bolivia, and as the international coordinator of the .famvin Digital Network, where he guided the strategic plan of the network from a primarily English-based project to a fully international ministry on both web and social media platforms. Fr. Rooney is a published author and continues to write and edit for famvin.org. He speaks English, Spanish, and still prays in Aymara, the native tongue of the people of the Bolivian Altiplano.

He recently served as Vice President for Mission Integration at Niagara University, where he also taught leadership in conjunction with the Department of Management in the College of Business and collaborated with the international mapping project of the FamVin Homeless Alliance. While at Niagara, he championed new and critical focuses for Vincentian-mission integration, including Niagara’s aim to become an antiracist institution and efforts to advance ecological sustainability aligned with the spirituality of Pope Francis’ encyclical Laudato Si'. He also worked to identify, raise awareness, and guide a better understanding and implementation of the University’s Catholic and Vincentian mission to root out the causes of poverty, racism, and human suffering wherever it is found.

As Executive Vice President for Mission and as a member of St. John’s University’s senior management team, Fr. Rooney is responsible for overseeing the Office of University Mission that includes mission formation and integration programs, Campus Ministry, the Vincentian Center for Church and Society, and the Vincentian Institute for Social Action.

Fr. Rooney earned a Master of Divinity from Mary Immaculate Seminary, Northampton, PA, in 1984, and a Master of Theology in 1986, also from Mary Immaculate Seminary. His postseminary education includes training in Vincentian formation, as well as advanced studies in statistics, multivariate analysis of variance at The State University of New York at Buffalo, and a Certificate in Management of Church Finance and Personnel from Villanova University.