Our campus is small, but we support big dreams. With a 12:1 student-faculty ratio and personalized attention from faculty, administrators, and staff, students form long-lasting academic and career mentorships.

St. John’s gives you many opportunities to apply the University’s Vincentian mission and expand your education through academic service-learning and civic engagement. You will be inspired to become more deeply involved in the local community and to learn more about social justice issues on Staten Island, in New York City, and throughout the world.

St. John’s Staten Island campus unites the academic traditions of the liberal arts with the practical applications of professional degrees, so you never have to choose between them. Faculty and academic deans work together to make sure that barriers between colleges and majors are turned into pathways. University Career Services advisors work hand-in-hand with academic departments, helping students transition from classroom to career.

St. John’s vibrant Student Life organizations invigorate the Staten Island campus and provide leadership opportunities from day one. The campus is located in the beautiful Grymes Hill neighborhood, sited on the historic Gans family estate overlooking the New York Harbor, and is the former home of Notre Dame College. 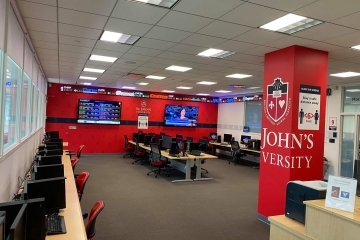 Staten Island campus life is a reflection of the entire St. John’s University community: diverse and service-focused. With more than 40 clubs and leadership opportunities for students, campus life is an essential part of your personal growth and a springboard for success.

Career readiness and preparation are part of every St. John’s students’ education on the Staten Island campus from first-year orientation to graduation

St. John’s University is committed to educational equity on Staten Island and supports programs that open doors for all students to succeed.

The site of the Staten Island campus was originally purchased in the early 20th century by immigrant John Gans. He chose the Grymes Hill location for his family estate because it overlooked New York Harbor, where he operated a steamship company. The main house of the estate, a 30-room Georgian mansion, was completed in 1915 and became home to his son, Herbert Gans, and his family.

In the early 1930s, Herbert Gans and his wife befriended Mother Saint Egbert, later known as Sister Helen Flynn, a Sister of the Congregation of Notre Dame. She had just been named the Director of the newly established Staten Island extension of Fordham University which was housed at Notre Dame Academy, a private school down the road from the Gans estate.

When the small college of 13 students received its own charter in 1933, the Gans family sold the family mansion to the new Notre Dame College, a Catholic undergraduate college for women. The home, renamed Flynn Hall after the college foundress, opened in 1934 and graduated its first class in 1935.

In 1937, Lavelle Hall, an academic building, was added and named in honor of Monsignor Lavelle, the Vicar General of the Archdiocese of New York. A science building followed in 1945, named Mahoney Hall after its principal benefactor.

In 1955, the college doubled its property with the purchase of the Herbert Gans estate, which included several properties. The largest was the college library, Spellman Hall, named after Francis Cardinal Spellman, then-archbishop of the Archdiocese of New York, who contributed toward its reconstruction.

The final purchase, an English Tudor home at the far end of the campus, was made in 1965.  The Drury family, who had purchased the house from Hans Gans in 1945, sold the house and surrounding property to Notre Dame College. It was renamed Rosati Hall in honor of Bishop Joseph Rosati, C.M. (1789–1843).

Notre Dame College served the community as a premier women’s college for more than 30 years. During the late 1960s, when it became difficult for small colleges to survive, Terence Cardinal Cooke, then Archbishop of the Archdiocese of New York, asked the Vincentian fathers of St. John’s University to integrate Notre Dame College, to ensure that Catholic higher education remained a vibrant presence in the Staten Island community and its environs.

On January 27, 1971, the New York State Board of Regents approved the consolidation, and the Staten Island campus of St. John’s University became a reality. Classes began in the Fall of 1971, combining the original Notre Dame College with the Brooklyn campus of St. John’s, offering undergraduate degrees in liberal arts, business, and education.

The Staten Island campus then saw considerable growth. A new building housing the Loretto Memorial Library opened in 1973, named in honor of Loretto McCarthy, the late wife of Charles E. McCarthy, D.C.S., Vice President for Business Affairs and Treasurer of the University. In the 1980s, the Campus Center was added. It includes dining facilities, student support services, and a gymnasium.

The Kelleher Center was dedicated in 1999. A student-centered building donated by University Trustee and alumnus Denis Kelleher, and his wife, Carol, the Kelleher Center is the home for enrollment services, premier meeting space, and a state-of-the-art Fitness Center.

In the Fall of 2004, the campus welcomed the John J. DaSilva Academic Center, which features computer labs for student and community use, a media lab, computer-assisted classroom space, faculty office space, and student/faculty meeting spaces. In the Fall of 2005, a newly refurbished Rosati Hall welcomed the College of Professional Studies administrative offices, faculty spaces, student commons, and conference space.

The Staten Island campus has expanded to include 16.5 acres serving more than 2,000 students who are enrolled in undergraduate and graduate degree programs. St. John’s College of Liberal Arts and Sciences, The Peter J. Tobin College of Business, The Lesley H. and William L. Collins College of Professional Studies, and The School of Education offer degree programs on the undergraduate, graduate, and doctoral levels with an opportunity for a commuter or residential experience. More than 10,000 degrees have been awarded on the campus to date.

This unique campus, where turn-of-the-century buildings stand alongside contemporary edifices, has a magical history of design and purpose. It fulfills the promise to bring together the academic rigor of a national Catholic University with the Vincentian mission.

As of August 2022, the University is no longer admitting students to the Staten Island campus due to a proposed substantive change pending approval by the Middle States Commission on Higher Education. For more information, please visit www.stjohns.edu/SITeachOut.