Staten Island is one of New York City’s fastest changing boroughs, and St. John’s is thriving along with it.

Staten Island’s West Shore and more urban North Shore are alive with economic development projects that are literally remaking the waterfront and transforming communities.  With the world’s largest Ferris Wheel and proposed zoning changes poised to bring new commercial and residential building projects to Staten Island, St. John’s is building partnerships with the businesses, community organizations, and non-profit corporations that sustain its neighborhoods. 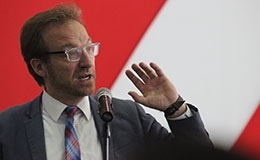 A St. John’s education on the Staten Island campus is unique. We are a close-knit community of faculty, administrators, staff members, and students who believe that a small campus makes a big impact.

We are especially proud of our history and special role on Staten Island. As the only Catholic higher education institution in the borough, we teach our students to make a positive difference in our community.

There is a bright future for you on St. John’s Staten Island campus.

St. John’s professors frequently visit high school academies and learning communities to prepare students for their next step.High school students in turn frequently visit the campus to sample classes and use the research technologies of the Loretto Library.

“Sandy Ground at St. John’s: Faces of the Underground Railroad”

“Difference Makers” is a new program created by Tobin College’s Department of Management on the Staten Island campus that partners high school students with St. John’s community partners, giving them the chance to join St. John’s civic engagement efforts and turn their community service into college preparation.High school students completing their community service receive a certificate of completion, a celebratory dinner with the community partner, and a letter of recommendation. Contact Dr. William Reisel at [email protected] for more information.

The Community Partnership Program provides a distinct experiential approach to teacher preparation through practical experiences at nonprofit organizations and cultural institutions and serves as a means for cultivating teachers’ knowledge of and responsiveness to issues school-age children and their families can confront.

Contact Regina Mistretta at (718)390-4491 or [email protected]  for more information about the School of Education’s Community Partnership Program.

Staten Island’s non-profit organizations play a key role in bringing services and new policies to the borough.  St. John’s Staten Island campus is playing an active role in promoting the growth of non-profit corporations, one of borough’s most active economic sectors, through research and capacity-builiding partnerships with these key organizations:

SIEDC’s mission is to enhance Staten Island’s economy by promoting public and private investment and encouraging development to improve the quality of life.

The only minority-led community center of its kind on Staten Island, Central Family Life Center seeks to improve the lives and environment of Staten Island residents and houses many critical social service programs for the borough’s diverse residents.

The North Shore Business Association is comprised of local business owners whose goal is to bring cohesion and a voice to the North Shore of Staten Island. Our membership is committed to the transformation, beautification and fostering safety in our neighborhoods.

An alliance of clinical and social service providers focused on improving the quality of care and overall heath for Staten Island’s Medicaid and uninsured populations, SIPPS manages the Healthy Neighborhoods research project, a survey of environmental factors affecting health outcomes.

Through its Healthy Neighborhoods programs, City Harvest partners with residents, community organizations, afterschool programs, and local businesses to achieve a long-term impact in the fight against hunger by engaging residents in healthy choices and enhancing the local food landscape.

The Staten Island Hunger Task Force advocates for the needs of families and individuals facing hunger problems and for not-for-profit emergency feeding programs in order to further make sure that hunger needs are meet within Staten Island.

A coalition of City Harvest, Staten Island Partnership for Community Wellness and other organizations, this initiative is committed to making Staten Island’s neighborhood healthier by making healthy fruits and vegetables more available.

As the southern most point in New York state, Staten Island borders mainland New Jersey, separated only by the narrow Arthur Kill river channel and three crossings (Outerbridge, Goethals and Bayonne bridges). On the northeastern tip of the Island, the Verrazano Narrows Bridge stretches across lower New York Bay to Brooklyn.

Florentine explorer, Giovanni da Verrazano, first sighted Staten Island in 1524 while on an expedition to find a passageway to the Pacific Ocean. Prior to European settlement, the land was occupied by the Lenape Native Americans. In 1661 the Dutch established a colony in present day South Beach and named the island Staaten Eylandt, after a Dutch parliament general. The English soon seized the Island in 1664 for the King of England and renamed it, Richmond, in honor of the Duke of Richmond. The following year, what is thought to be the oldest existing school building in the United States was created, the Voorlezer's House, located in Historic Richmond Town.