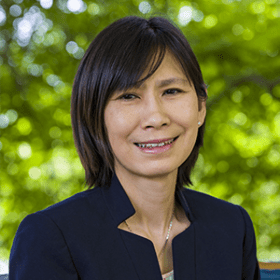 Anne Y. F. Lin ’84P, ’86Pharm.D., FNAP, is a double alumnus of St. John’s University, having earned her B.S. in pharmacy degree in 1984 and her Doctor of Pharmacy degree in 1986. After earning her graduate degree, she completed a clinical pharmacy residency at Medical College of Virginia Hospitals.

She returned to St. John’s to serve as Assistant Professor of Clinical Pharmacy (1987–93); Associate Professor of Clinical Pharmacy (1993–96); Director of the Doctor of Pharmacy Program (1994–96); and Director of Drug Information Services at Long Island Jewish Medical Center in her faculty role. Dr. Lin served as Chair and Professor of the Department of Pharmacy Practice at Wilkes University, where a new school of pharmacy was opened (1996–04), and then Dean of the College of Pharmacy-Glendale at Midwestern University (2004–07).

Prior to her appointment as Dean of the College of Pharmacy and Health Sciences, she served as Founding Dean and Professor of Clinical and Administrative Sciences at Notre Dame of Maryland University’s new School of Pharmacy (2008–22).

As a faculty member, Dr. Lin has extensive teaching and scholarly experience, including teaching at each of the institutions that she served at; publishing numerous peer-review articles, book chapters, and newsletters; and presenting at national and international conferences. She is also active in community organizations and has served on the board of directors of the Caroline Center, the Executive Alliance for the promotion of women in professional and executive positions, in addition to other advisory boards.

A recipient of numerous awards and honors for her leadership and academic accomplishments, St. John’s University awarded her the Distinguished Alumna Award in 2005. Highlights of her awards and honors include Distinguished Practitioner and Fellow (National Academies of Practice); three-time recipient of Maryland Daily Record’s “Top 100 Women,” placing her in the Circle of Excellence; the Daily Record’s Healthcare Heroes Award; the Anne Marie Liles Distinguished Service Award (American Association of Colleges of Pharmacy); and the Interdisciplinary Group Award (National Academies of Practice).