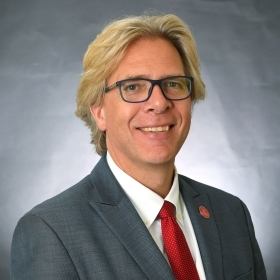 Simon Geir Møller serves as Provost and Vice President for Academic Affairs, University Distinguished Professor and Provost Endowed Chair. Following a four-year North Atlantic Treaty Organization (NATO)-funded postdoctoral position at Rockefeller University Simon was appointed as an assistant professor in 2001 and as associate professor in 2004 at The University of Leicester, UK. In 2006 Simon was appointed as Professor and Chair of Department of Mathematics and Natural Sciences at the University of Stavanger, Norway and held a joint professorship at The Norwegian Centre for Movement Disorders. In 2009 Simon founded and became Director of Centre for Organelle Research, a research center dedicated to organelle biology. He also founded the biotechnology company Plastid Corp in 2007. Simon was appointed as a tenured professor at St. John’s University, Department of Biological Sciences in 2011 and in 2014 as the Vice-Provost for Graduate Education and Research. In 2015 he became Senior Vice Provost. In 2018 he was appointed Interim Provost and VP for Academic Affairs. On July 1, 2019, he was appointed Provost and Vice President for Academic Affairs.

Simon maintains an active research laboratory and has published more than 80 research articles and book chapters in prestigious journals such as Nature, Proceedings of the National Academy of Sciences, Genes and Development, and EMBO Journal. He has received international recognition for his contribution to sciences including The European Molecular Biology Organization (EMBO) Young Investigator Award, The Federation of European Societies of Plant Biology (FESPB) Young Scientist Award, The Society of Experimental Biology (SEB) President’s Medal in Cell Biology and The Promega International Scientific Prize. Simon is also an elected member of the Norwegian Academy of Technological Sciences and has had numerous advisory board and board member positions within the biotechnology industry sector.

Since 2002, Dr. Møller has secured over 12 million dollars in extramural research funding. Presently, he has a research grant from The Norwegian Research Council ($950,000), two research grants from the West of Norway Health Authority ($500,000), The Norwegian Centre for Movement Disorders ($85,000), and The Norwegian Parkinson’s Disease Association ($35,000).

Since 2001, Dr. Møller has been invited to be a Plenary Speaker or Speaker at over 40 conferences on topics related to his field. He has also chaired or organized several conferences in the area of Biological Sciences.

At a pregame reception held before the St. John’s University Men’s Basketball team squared off against the Pirates of Seton Hall University, local New York City business leaders, small business owners from Queens County, and senior members of the University talked about business, sports, and the ever-changing business of sports.