Cloudy skies and a misty rain did not dampen spirits during a conaming and unveiling event held on May 2 at St. John’s University’s Queens, NY, campus. The ceremony—which featured the reveal of the southwest intersection of Union Turnpike and Utopia Parkway dedicated as St. John’s Way—paid homage to the enduring legacy of the 152-year-old Catholic and Vincentian University.

Like a New York City serenade set amid the urban cacophony of a busy afternoon in “The World’s Borough” of Queens County, the sights and sounds of the outdoor ceremony were punctuated by cheers, music, random honking horns from passing motorists, a speeding ambulance, and the buzz of natural human energy that fuels any gathering of New Yorkers— especially Johnnies.

After the singing of the National Anthem by graduate student Michael Walker and an invocation from Fr. Flanagan, Brian Browne, Executive Director, University Relations, and Assistant Vice President, Government Relations—who coordinated the special event and acted as Master of Ceremonies—set the stage for what would soon unfold.

Mr. Browne described the legislative process to secure the ceremonial conaming and how it persisted throughout the COVID-19 pandemic and some unexpected transitions in the elected leadership of the 24th New York City Council district, home to the Queens campus.

“We started this conversation in advance of our 150th anniversary, and after a lengthy process, here we are today. Perhaps it is fitting that we have been waiting for a sign to be installed because for a long time, between the purchase of the old Hillcrest Golf Course and the opening of our Queens campus in the mid-1950s, a sign outside the property read ‘Future Home of St. John’s University.’ We have come so far since that very first sign.”

Founded in 1870, in Brooklyn, NY, St. John’s first established a foothold in Queens County when it purchased the Hillcrest Golf Course and some adjacent lots of land in 1936 for a total cash sum of $510,000. Delays in development, the onset of World War II, and further setbacks kept the property operating as a golf course until New Year’s Eve, 1953. The ground was eventually broken for the first building on the Queens campus in 1954 and classes began a year later. 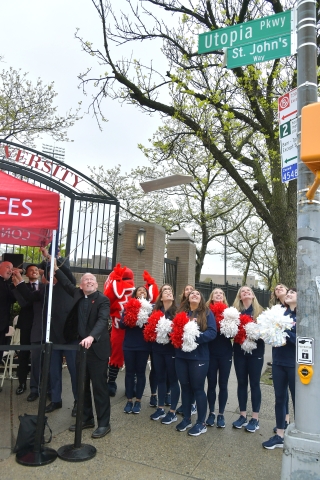 In December of 2021, with the support of Councilmember Gennaro, the New York City Council voted overwhelmingly for an omnibus package of street conamings that included the honor for St. John’s. Councilmember Gennaro spoke passionately of the significance of the conaming and of the many personal family connections that he has to St. John’s, including his mother, brother, and his late first wife, who was once employed in the Office of Alumni Relations.

Lauding the University and paying homage to its enduring legacy, Councilmember Gennaro described St. John’s as “a beacon of the community and the country, and a place for people of all faiths who strive to use their God-given talents along lines of excellence.”

Before introducing Fr. Shanley, Ethan Burrell, President of Student Government, Inc., shared how he hopes to return one day as a proud graduate and view the St. John’s Way sign and all that it symbolizes in his own journey as a student. “This sign is a reminder of the excellence of the community of St. John’s, and of our excellence here in the Queens community,” he said.

In his remarks, Rev. Brian J. Shanley, O.P., President of St. John’s, deftly expressed how fitting it was that the new sign is located at the intersections of three names that simultaneously mark the mission of St. John’s.

Starting with the new St. John’s Way sign, Fr. Shanley reminded the crowd, “The founding Vincentian mission of St. John’s was to provide quality Catholic education to immigrants and their children. Our continuing mission is to be a place of upward mobility and life-changing education—and that will always be the St. John’s way.”

He then explained the origin of the word “utopia,” first coined by St. Thomas More, and how the pursuit of education examines how humanity can improve. “We stand at the intersection of Utopia and Union. Where St. John’s meets the community is right here on this corner, so these three names—St. John’s, Utopia, and Union—mark the mission of St. John’s. We are not meant to stay here. We are meant to emerge thinking about utopias and helping them to become realized in our community.”

When the time came for the big reveal, Fr. Shanley, Councilmember Gennaro, and Johnny Thunderbird, surrounded by cheerleaders, pulled the string to remove the protective covering that unveiled the new St. John’s Way sign as spectators cheered in delight.