University Relations works to develop and oversee comprehensive communications, marketing, and public relations programs that represent a strategic, cohesive, and consistent image and message to support the University’s mission and goals.  We work to cultivate and maintain relationships with constituent groups through timely and accurate communications and regular, personal outreach and community involvement. 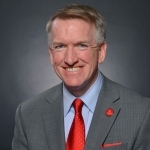 As the Executive Director for University Relations and Assistant Vice President for Government Relations at St. John’s, Brian Browne is responsible for all of the internal and external communications and University Relations efforts at the University.  Mr. Browne serves as the primary liaison with elected officials and government agencies at the local, state, and federal levels.  In this role, he tracks legislation, provides legislative advocacy and awareness, and works to secure new sources of government funding and appropriations for University programs and initiatives.  An experienced leader in government relations, community engagement, and media affairs, Mr. Browne has front-line responsibility for coordinating daily interaction with local, state, and federal government officials and community leaders on behalf of St. John's.  He is directly responsible for the creation and implementation of government and communication strategies to promote, protect, and benefit the University and its constituencies.

In addition to his administrative responsibilities, Mr. Browne serves as an adjunct faculty member in the Department of Government and Politics, teaching undergraduate courses in municipal government, public administration, and state and local government.  He also regularly provides political analysis and observations for the media; his political commentary has appeared in the New York Post and on WNBC-TV, NY1, WPIX11 News, NET-TV, and many other local media outlets.

Mr. Browne is the founder and primary coordinator of St. John’s PARTICIPATE, an annual civic engagement program that promotes a University-wide effort to increase civic involvement and engagement in the political process on campus and in the local community.  In this effort, Mr. Browne regularly serves as a moderator of public candidate debates and annually hosts Meet the Candidate nights on campus.

In January 2016, Mr. Browne was tapped by Conrado “Bobby” Gempesaw, Ph.D., President of St. John’s, to serve as the Vice Chair of the University-wide Strategic Priorities Review Team (SPRT).  The SPRT committee is responsible for reviewing, monitoring, and taking a continuous inventory of the implementation of the University's strategic priorities.  Mr. Browne coordinates a 40-member team that includes members of the faculty, administrators, and students who work to ensure that the University meets established targets and recommend revisions to departmental metrics, unit action plans, and the overall strategic priority implementation process.

In May 2016, Mr. Browne received  St. John's Outstanding Administrator Achievement medal for dedication and loyalty to the University community.  He  also has been recognized by the Irish Voice on its “Irish Education 100” list and named a “Rising Star” by the Queens Courier.  Mr. Browne was appointed by Queens Borough President Melinda Katz to serve on the Jamaica Now Leadership Council.  In addition, he serves on the St. John’s University Institute for Catholic Schools.

After completing his undergraduate and graduate studies in government and politics at St. John’s University, Mr. Browne got his start in local politics as a congressional staffer, rising from the ranks of volunteer intern to District Office Director before returning to his alma mater in 1998.