The latest cohort of St. John’s University nursing students is embarking on a career whose demands are evolving but whose foundational values remain as essential as ever, according to Francine Laterza, Ed.D., R.N., PNP, CNE, Director of Nursing.

The University’s new class of 39 nursing students began studies this fall. Most are expected to graduate by 2026. After passing licensing exams, they will begin work in an industry hardened by the coronavirus pandemic, but still guided by values of service and compassion.

“The pandemic experience shaped the outlook of people who were considering nursing as a career,” Dr. Laterza said. “Maybe they had a loved one in the hospital and they had a real one-on-one interaction with their nurses,” Dr. Laterza continued. “Nurses went the extra mile to help people to heal or to have a last moment with their loved ones.”

In April 2022, the University received approval from the New York State Education Department to offer a Bachelor of Science degree program in Nursing and only then could it begin the student recruitment process for the Fall 2022 semester. A month later, ground was broken on the multimillion-dollar St. Vincent Health Sciences Center that will house the nursing school when it opens in Fall 2024.

As Dr. Laterza continues to build a new nursing curriculum, the students are taking mostly general University-required courses. Nursing courses for the group should begin largely in 2023 and clinical work, exposing students to specialized areas of practice, should begin when they begin their third full year.

A resident of Massapequa, NY, Dr. Laterza has worked in a number of New York City-based hospitals. She said she would like to capitalize on the University’s historical relationship with the borough of Queens, growing the program in the Vincentian tradition.

“Queens has been so good to St. John’s,” Dr. Laterza said. “I see the nursing school as an opportunity to give back to the borough. I would like to make this the nursing program of Queens. There are some great institutions in Queens that do not have the nursing personnel to support them.”

The inaugural cohort has a decidedly metropolitan-area identity. Of the 39 students, 34 are from New York State, including more than 20 from New York City. More than half of the cohort self-identifies as nonwhite, and 84 percent are female.

Consistent with the cultural diversity of Queens, Dr. Laterza says the University will follow a theory of education called transcultural nursing popularized by Madeleine Leininger, Ph.D., a nursing theorist who believes in considering a patient’s racial, ethnic, and cultural influences when determining a plan of care. Such an approach can ease feelings of uncertainty and fear in patients. It likewise can allow nurses to broaden their perspectives and offer more holistic care.

According to Dr. Laterza, transcultural nursing is consistent with St. John’s core values and an ideal fit for nurses who hail from and seek career opportunities in diverse metropolitan regions. “Nurses should always understand cultural sensitivities,” she said. “That is what will make us different here at St. John’s. Our core values allow us to attract a diverse population of students who want to be part of a community that is diverse and welcoming.”

Several members of the inaugural cohort shared their stories recently, including why they decided to pursue nursing education and what made them choose St. John’s. Though their backgrounds and career ambitions vary, all are proud to be members of this pioneering group. 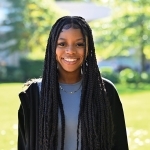 ESTHER BABALOLA is using the lessons she learned in track and field to propel her to success as part of the newest cohort of St. John’s University nursing students.

Discipline, character, leadership, and attention to detail are all essential to a gifted sprinter and jumper, Esther said. But they are also fundamental to success as a student.

The daughter of a doctor who happens to also be a conference champion long jumper, Esther needed no coercion to enroll at St. John’s. It’s close to her Nassau County home, carries a sterling reputation, and offers her an opportunity to one day become a nurse practitioner or even attend medical school.

“Seeing the way my mom takes care of my whole family, she is the best person ever,” Esther said. “What I didn’t know until seeing it was how much people respect her. Now that I might be pursuing a job in the medical field, she says I can always turn to her.”

Esther said her first few months in St. John’s nursing program have been demanding, but they have also been effective preparation for her career ambitions. Anesthesiology, as a doctor or nurse practitioner, is an area of interest. 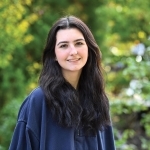 EMMA DERGARABEDIAN is uncertain what changed the direction of her life, but she is delighted to be on a path now toward earning a Bachelor of Science degree in Nursing at St. John’s University.

Unaware the degree program was available at St. John’s, Emma intended to enroll elsewhere. But once she discovered the University’s nursing program while doing some random research, the 18-year-old from Baldwin, NY, was all in.

“I didn’t know about the program,” Emma, a first-year student, said. “But when I discovered it, I realized then that I really liked this school. I wanted to stay close to home for college, so St. John’s worked out perfectly.”

Emma, a graduate of Long Island Lutheran High School in Brookville, NY, has been interested in health-care services for several years. She serves as a caretaker for her grandmother, who has thyroid cancer, and was an athletic trainer intern at her high school. A decorated athlete who excelled in lacrosse, soccer, and cheerleading in high school, she imagines a career one day as an orthopedic or emergency room nurse. 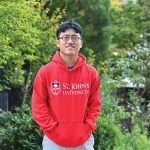 JOEL KIM was fortunate to survive a complicated birth. Eighteen years later, he is determined to pay his good fortune forward in a career that helps others.

Born with digestive complications that required life-saving surgery as a newborn, Joel has known from childhood that he wanted to become a nurse. Now a part of the class of St. John’s University nursing students, he is closer than ever to his destiny.

“I’ve always known that I want to help other people,” Joel said, “I also want to be like my parents, who also help others. I would not be here today if it wasn’t for the care I received from the people who worked in the hospital and in the health-care industry.”

The son of two nurses, Joel survived emergency gastrointestinal surgery to take pressure off a stressed digestive system. His mother, who works at NewYork-Presbyterian Hospital in Flushing, NY, and his father, a public school nurse, were later told that two such procedures were performed at that time; the other baby did not survive.

As Joel matured, there was no question about a career choice. “I watched my parents and how hard they worked to help others. I knew I wanted to do that, too,” he said. 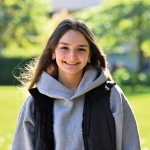 JORDAN SCHMIDT’S life took a turn when her mother, Andrea Schmidt, died of cancer two months before her graduation in June from Massapequa High School in Massapequa, NY. Reflecting back on that time, Jordan believes Andrea provided gentle, loving, motherly guidance from above as she made the decision to pivot to St. John’s and join its cohort of nursing students.

“I didn’t know this until a few months after she passed, but my mom hoped I would go to St. John’s,” Jordan, 18, said while seated in the D’Angelo Center during a break in her classes. “She didn’t tell me because she didn’t want to influence me. She knew having my sister here would be a great resource, and if I ever had to, I could easily travel home.”

Jordan abandoned plans to attend Penn State University, eventually enter medical school, and become a physician, opting instead for a future in nursing. Her ambitions include becoming a nurse practitioner, perhaps in a trauma setting, after a few years of general practice.

“When my mom was in hospice care I saw how compassionate the nurses were,” Jordan recalled. “I watched the nurses take care of her and I wanted to pay that forward. I saw nursing school at St. John’s as sort of a sign.”