What’s on Tap? Alumni Make a Splash in the Craft Beer Industry

It has often been said that if you love what you do, you’ll never work a day in your life. This adage clearly resonated with St. John’s alumni Brett Blau ’88SVC, Glenn Closson ’11MBA, and James Sykes ’05CPS, who are each living out their dreams as leaders in the $22 billion craft beer industry. Now, these alumni brewers share with us the unique paths they took in turning a passion into a profession. 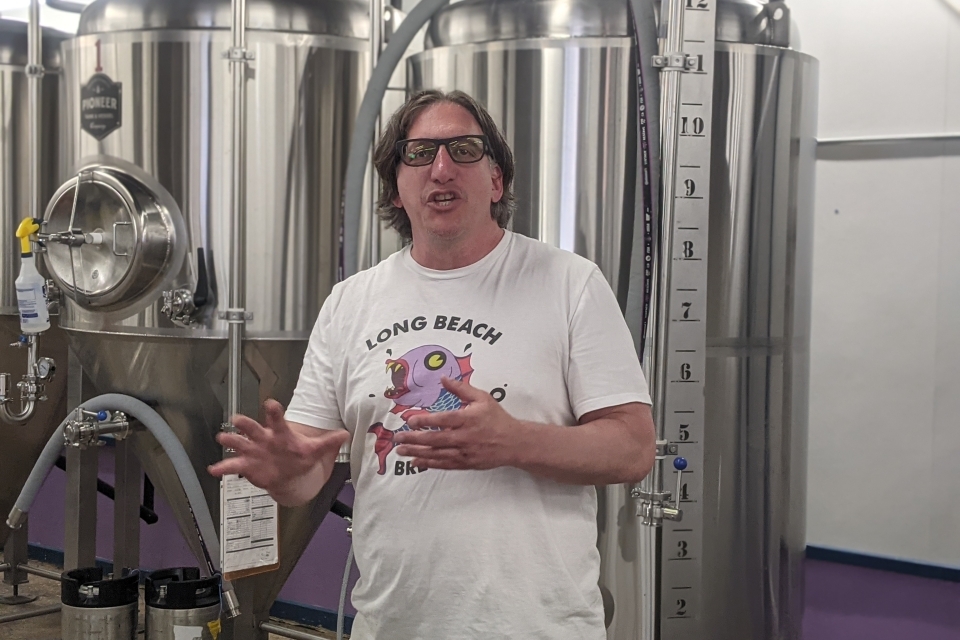 Like many who have entered the burgeoning world of craft beers, Brett Blau ’88SVC did not attend college to learn the art of brewing. However, the connections he made through the St. John’s alumni network have certainly served his business, Long Beach Brewing Company (LBBC), quite well.

“I didn’t major in biochemistry or business or anything like that, because I knew I wanted to work in television,” said Mr. Blau, who majored in Communication Studies. “However, my time at St. John’s is serving me well, thanks to the sheer number of St. John’s alumni who own restaurants and bars in New York City. It’s like having a built-in client base, and it is a huge asset.”

Those alumni connections also extend to LBBC’s distributor, Iron Horse Beverage LLC. “Their President and Chief Executive Officer is alumnus Cliff Morello ’80CBA. He played baseball for St. John’s and caught for both John Franco and Frank Viola,” Mr. Blau explained. “He has taught me so much about the business side of the industry.”

An athlete in his own right, Mr. Blau attended St. John’s on a Men’s Lacrosse scholarship. After earning his degree in 1988, he entered the world of television production and has been an in-demand video editor ever since.

“I’ve done everything from music videos to commercials to sporting events,” he said. “I have traveled around the world to work different events, such as the Olympics and the Super Bowl.”

An exhaustive travel schedule and the desire to spend more time with his children inspired Mr. Blau to turn what had been a hobby into a career. “The hours were very demanding, so I was looking for an exit strategy.”

“My neighbor and I had been kicking around the idea of a brewery for years, but never acted on it,” said Mr. Blau, who lives in Long Beach, NY. “One year, the staging area for the annual Irish Day Parade was on my block, and my neighbor and I offered a sample of our beers to the leader of a pipe and drum band. Before we knew it, there was a line of men in kilts in front of my house who heard about this amazing beer. When I saw that, I said to my neighbor, ‘Let’s do it.’”

In addition to the relationships he made with St. John’s alumni, Mr. Blau is proud of the friendships he has forged with other brewers. “The best thing about the brewery world is that it’s a friendly competition, and everybody helps each other out,” he said. “We all want to succeed, but if you’re short on something, or you need to borrow a piece of equipment, there’s a community there to help.”

While LBBC is currently waiting for zoning approval on a tasting room at their brewery, supporters of the brand can purchase their favorite lagers and ales at the brewery, as well as at retailers on Long Island and in New York City.

“Every aspect of the job is rewarding to me, even if I’m mopping up the floors,” he said.

“But the best part is when someone walks in and says, ‘We love your beer.’ It makes it all worthwhile.” 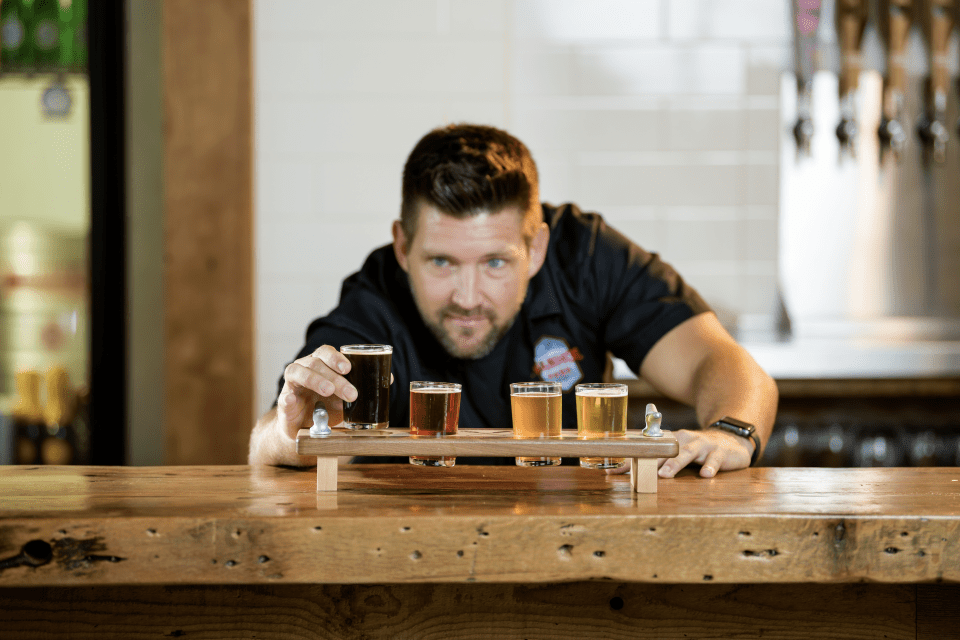 Glenn Closson ’11MBA is no stranger to pulling up roots. When the native of Costa Mesa, CA, decided to pursue an M.B.A. in Finance more than a decade ago, he was drawn halfway around the world to St. John’s Rome, Italy, campus. Today, his wanderlust has led him to Orlando, FL, where he is Chief Executive Officer of one of the region’s hottest breweries.

“The initial draw to St. John’s was the idea of studying abroad in Italy and then finishing the program in New York,” he said.

“It was a great experience being able to leave everything behind in California and take a leap to study in Rome for a year. St. John’s support system made the transition easy.”

He graduated in 2011 and shortly thereafter began working as a finance manager for a software company. In his spare time, he took an adult education course on home brewing—and was hooked. After two-and-a-half years in finance, he decided to switch gears and turn his love of brewing into a career by opening Beach City Brewery in Huntington Beach, CA.

Thanks to the time he spent in the M.B.A. program, Mr. Closson was as well-versed in business as he was in brewing—something he used to his advantage when he was attempting to make his dream a reality.

“In order to open Beach City, I needed to secure a Small Business Administration loan, which meant making a presentation to a local bank,” he recalled. “Because of the M.B.A. program, I knew how to create a business plan and forecast financials and was granted the loan.”

After three years at the helm of Beach City, Mr. Closson sold his majority ownership and traveled east to Orlando, FL, where he founded Ivanhoe Park Brewing Company.

Under Mr. Closson’s leadership, Ivanhoe has taken Orlando by storm. “When we opened, we had 12 taps filled with our beers,” he said. “Now, we have distribution agreements with three distributors covering six counties in Florida and hope to be statewide this year.”

Ivanhoe was named Best Brewery in the Orlando Sentinel 2021 Foodie Awards and earned gold medals at the Best Florida Beer competition for two of its offerings: Park Hopper Pilsner and Tupac ShaPorter.

Not surprisingly, consumers’ tastes in beer change often, and that presents a challenge to Mr. Closson and Ivanhoe. “I always try to keep up with what is trending in the industry and make sure we keep ahead of that,” he commented. “Our core beers are based on easy drinking and approachable styles that hopefully introduce consumers to craft beer.” 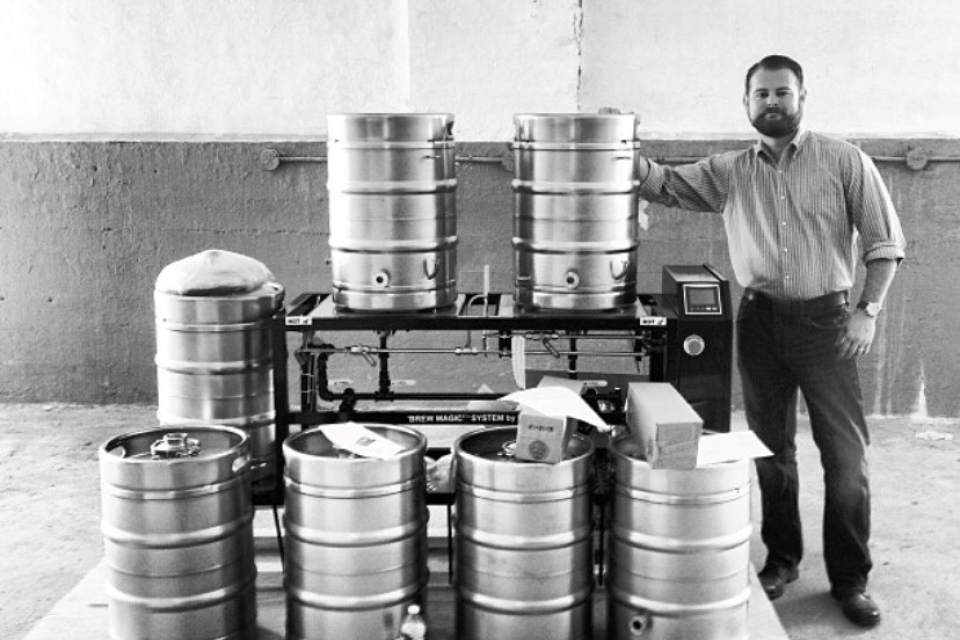 While fellow alumnus and brewer Glenn Closson traveled extensively as a student and business owner, James Sykes ’05CPS stayed close to his Staten Island, NY, home for both college and career.

“I attended St. John’s Staten Island, NY, campus because it has a great reputation,” he said. “My aunt and cousin both attended St. John’s, and I knew that if it was up to their standards, I was certainly headed in the right direction. The ability to attend a great university while staying in my hometown was a big factor, too.”

Mr. Sykes graduated from St. John’s with a degree in Business and Criminal Justice and worked for MetLife Services and Solutions, LLC, as a sales representative. After two years, he accepted a position with a beer distributor in New York City.

“Through my position with the distributor, I developed a passion for the culture of beer and brewing,” Mr. Sykes said. “Over my six years there, I eventually started home brewing and plotting to open a brewery of my own.”

His goal was realized in 2014 with the opening of The Flagship Brewing Company. Located in the Tompkinsville neighborhood of Staten Island, Flagship was created as “…something that could bring the diverse people of Staten Island together.”

Today, Flagship is just that.

“Our taproom has become somewhat of a cultural center here on the north shore of Staten Island and seems to just keep getting bigger every year,” he explained.

“We have grown in many ways since those early days—especially in the hearts and minds of our fans.”

Not surprisingly, being the President of a growing business can be a balancing act at times, and Mr. Sykes’s experience at St. John’s prepared him for the position. “To be honest, I was not the best student early on at St. John’s,” he said. “That all turned around when I learned to focus on my goals and break down complex problems into smaller ones.”

Flagship can be found throughout New York City and on Long Island and features names that bring a smile to the faces of New Yorkers, such as “Pizza Rats Pilsner,” “Kill Van Kolsch,” and “Fresh Kills IPA.”

“The best part of my job is the creative ability to make ideas turn into reality,” he said. “The worst part is the amount of monotonous paperwork that it takes to make it all happen. Ultimately, I consider myself an entrepreneur with a love for all things beer.”