In recognition of Women’s History Month, St. John’s, a Catholic and Vincentian University, recognizes the contributions of St. Louise de Marillac, Foundress of the Daughters of Charity and Patron of Social Works.

Born in Paris in 1581, Louise never knew her mother; she was raised by her father, a member of the aristocracy. When her father married, Louise had a difficult time adjusting and was placed in the royal Monastery of Poissy and educated by the Dominican Sisters. There, she learned art, music, and literature, but was removed by her family upon the death of her father when she was 12.

She was then sent to live in a boarding house, where she had the opportunity to learn many basic domestic and organizational skills. This experience rounded out her classical, upper-class education and prepared her well for her future service.

On February 5, 1613, Louise married Antoine Le Gras, Secretary to the Queen of France, and they had a son, Michel, in October of that year. Louise traveled and socialized among both the royalty and aristocracy of France, but she was equally comfortable with the poor, no matter their desperate situations. She held a leadership role in the Ladies of Charity, an organization of wealthy women dedicated to assisting the poor.

While at prayer in 1623, Louise had a vision in which she saw herself serving the poor and living the vows of religion in community. In that vision, a priest appeared to her, whom she later identified as Vincent de Paul, her future confidante and collaborator in ministry.

Her husband, Antoine, died in 1625, the same year that Vincent de Paul founded the Congregation of the Mission.

Four years later, Vincent invited Louise to assist him with the Confraternities of Charity in the parishes of France. These tasks were therapeutic for Louise and formative for her future work and that of the Vincentian family.

“His experience was very different from hers, but the combination of these two unlikely collaborators produced what we know as Vincentian education, Vincentian health care, and Vincentian service to anyone and everyone who was in need,” explained Sr. Louise Sullivan, D.C., Professor Emerita of French at Niagara University. Sr. Sullivan is a Daughter of Charity of the Province of St. Louise: USA who has presented worldwide on St. Louise and other Vincentian themes.

Through her own work and her work with Vincent, St. Louise gained a deep knowledge of the needs of the poor, developed her own management skills, and identified effective structures for service.

“She possessed the ability to see what was around her and assess what was needed,” said Sr. Sullivan. “Before you can ask the essential Vincentian question—‘What must be done?’—you must first see what the need is.”

Deeply concerned with the poverty and suffering in which they were surrounded, St. Louise de Marillac and her mentor, St. Vincent de Paul, founded the Daughters of Charity in 1633 in Paris, France. 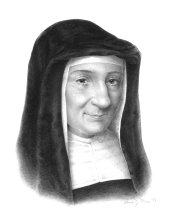 “They had a vision of mission, of education, as an integral, essential part of the Vincentian mission,” said Sr. Sullivan. “It came from Vincent, and his faith and experience, and from Louise, and her faith and experience. Neither of them could have done it alone.”

Together, they brought together a group of 12 young women who shared their dedication of helping the poor and the sick. The newly formed Daughters of Charity established soup kitchens, organized community hospitals, set up schools and homes for orphans, offered job training, and improved prison conditions.

She was beatified by Pope Benedict XV in 1920, and on March 11, 1934, she was canonized by Pope Pius XI. In 1960, Pope John XXIII proclaimed her the Patroness of all Social Workers. The feast day of St. Louise de Marillac is May 9.

As a wife, mother, teacher, nurse, social worker, and religious foundress, St. Louise stands as a model to all women. She lives today in the 14,000 Daughters of Charity serving throughout the world, as well as in their many lay collaborators.