Since the Arab Spring in 2011, a migrant crisis erupted as natives of war-torn countries in the Middle East sought refuge and a better life in Western Europe. Two of those harrowing stories are highlighted in the HBO documentary film, It Will Be Chaos, codirected and coproduced by Filippo Piscopo, Adjunct Assistant Professor of Television and Film, with his wife, Lorena Luciano, both of whom are natives of Italy.

The film has screened at film festivals all over the world, and recently won an Emmy Award for Outstanding Current Affairs Documentary at the 40th Annual News and Documentary Emmy Awards held on September 24 at Lincoln Center in New York City.

“Filippo and Lorena address a topic that is fundamental to our University mission: welcoming the stranger,” observed Katia Passerini, Ph.D., PMP, The Lesley H. and William L. Collins Distinguished Chair, and Dean, The Lesley H. and William L. Collins College of Professional Studies. “The depth and breadth of their film touches on many issues that immigrants and refugees share, doing it brilliantly. The Emmy is just one of the many international recognitions that they have received. Our College is fortunate to learn from Filippo, not only about professional filmmaking, but about addressing social inequalities.”

It Will Be Chaos follows the parallel stories of a Syrian family traveling from the Balkans to Germany, and the journey of an Eritrean refugee from the small Italian island of Lampedusa to Sweden, after a disastrous voyage where more than 300 migrants, including his three cousins, drowned. Eritrea, an African country on the Red Sea coast, is commonly known as the “North Korea of Africa,” according to Prof. Piscopo.

In 2013, he and his wife became keenly aware of the migrant crisis exploding across Europe. Although the couple now lived in the US, friends and family kept them abreast of the situation as migrants began arriving in Italy by the hundreds—their first stop, the outlying island of Lampedusa.

“We immediately wanted to do something,” he observed. While there was a wealth of news coverage at the time, “part of the story was not being told.” Using the shipwreck as their framing device, they traveled to Italy and immediately set about researching the situation: interviewing refugees, the fishermen who rescued them, and the natives and government officials whose lives were being impacted by this rapidly unfolding crisis.

They focused on the compelling story of Aregai, who survived the shipwreck off Lampedusa. “It was difficult to get him to trust us,” Prof. Piscopo recalled, but eventually the filmmakers developed a rapport, assuring Aregai that telling his story would serve as a memorial to his family members.

“Our intention with this film is to give the mosaic of the immigration story,” Prof. Piscopo explained. As he and his wife began the process of editing Aregai’s story in 2015, they learned of Wael and Doha, parents who fled Syria with their four children, ultimately hoping to reach Germany. Prof. Piscopo and his wife had almost no time to decide if they would follow them, as the family was constantly on the move.

“It was a very difficult decision, but we realized we had to document that other trajectory—that of a family fleeing the bombs of Damascus, and a father taking his family to safety,” he said. One aspect of the journey they could not follow was a harrowing trip across the Aegean Sea the family made to reach the Greek island of Lesbos.

Smugglers took the family across in an overcrowded dingy that could capsize at any time. Prof. Piscopo’s crew gave them satellite phones to call the Coast Guard if they were in trouble. The phones also allowed the family to film the journey, giving the audience a frightening firsthand perspective on the experience.

Prof. Piscopo and his crew were embedded with Wael and Doha’s family throughout their entire journey, which took them through eight countries before ultimately reaching their destination. They slept in refugee camps and traveled on trains and buses—and many times on foot. “That was very intense,” Prof. Piscopo reflected. “You had men, women, children, newborns, and people with handicaps traveling in wheelchairs.” He added there was a palpable tension and chaos in nearly every location, especially at border crossings. 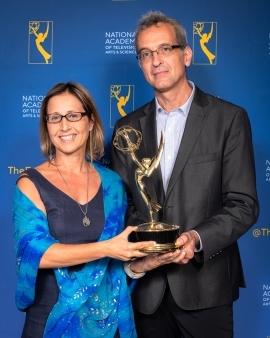 Prof. Piscopo and his wife employed a small crew of technicians from different cultural, religious, and ethnic backgrounds, and the film shuns any comment on the political aspects of the story while presenting both sides of this complex issue. “The strongest element of documentary filmmaking is raising awareness. We want the audience to get close to the human stories of our main characters,” Prof. Piscopo emphasized. The Emmy win is further validation of the film’s success and will give it a much larger audience; the film screens at the World Bank this December.

“I am really glad to be a part of such a vibrant community of educators here at St. John’s,” Prof. Piscopo stressed. “My students come from all walks of life, and they bring wonderful contributions to the classroom experience. Many times I am inspired by them.” He brings his expertise to the class, teaching students the language of filmmaking, “but behind every shot, every sequence, every film, there is something more to say. We do not offer solutions. We raise questions—that is the purpose of documentary filmmaking.”