Nine St. John’s University students met with elected representatives and attended the Catholic Social Ministry Gathering (CSMG) on January 25–28 in Washington, DC. The theme was “Bearing Witness: Life and Justice for All.”

As a cross-campus collaborative effort, departments and offices nominated students to participate. Out of the nine students who represented St. John’s University, five received fully funded scholarships through the Diversity Outreach Initiative offered through the CSMG. The gathering brought together those who work on issues impacting life and human dignity, such as maternal and child health, human trafficking, family separation, immigration, and incarceration. 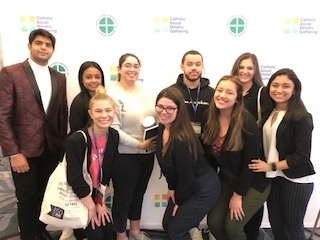 The weekend also featured an opportunity for students to lobby on Capitol Hill for legislation and policies on many of these issues. Their advocacy focused on four high-priority measures that have bilateral support and are expected to pass: renew the New Start Nuclear Peace Treaty (international); pass red flag safety measures in response to gun violence (domestic); provide immigration policy support for near-term outlook Deferred Action on Childhood Arrivals/Development, Relief, and Education for Alien Minors (international); and maintain the annual fiscal budget, which supports poverty-reducing aid and relief (international).

“Some people do not realize it is an open office and you can walk in and let your representatives know your concerns because they are public servants,” Beatriz said.

Students opened their hearts and minds to work together toward the common good and ask that policy makers heed their call for just measures as their elected representatives. “Advocacy is essential for a functional society,” said junior Nitin Basra, an Actuarial Science major; Human Trafficking Chair, Catholic Relief Services; President, Math Club; and Peer Leader, Discover New York. “Our world will never be perfect, but we can work toward becoming better than we are today. Personally, I encourage everyone to take some time and reach out to their local representative, or even schedule an appointment with their senator—and have their voice heard.”

Vincentian Chair Lecturer Discusses Hope in the Midst of “Apocalypse”