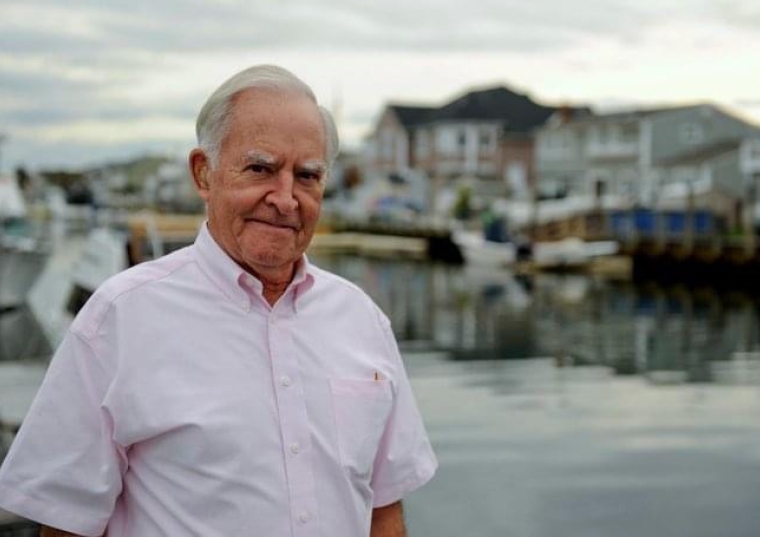 He was initially called to serve in 1945, just after graduating from St. John’s Preparatory School in Brooklyn, NY. At the time, Mr. Downing was working at Mellor’s Drug Store in the Cypress Hills section of Brooklyn, NY, where he was raised. He temporarily left Mellor’s to report for duty with the US Maritime Service, spending two years as a quartermaster on large oil tankers in the Caribbean and near the Panama Canal.

Originally hired while in high school to work at and later manage the soda fountain counter at the busy drug store, Mr. Downing was introduced to the pharmaceutical industry when he was reassigned to work in the prescription department of Mellor’s. It was there that he discovered his interest in becoming a pharmacist.

“I already knew I wanted to become a pharmacist by the time I enrolled at St. John’s, but the University was instrumental in preparing me well for my chosen field,” Mr. Downing said.

By the time he was called to military service for a second time, in 1951 during the Korean War, Mr. Downing was continuing his assignment in the prescription department at Mellor’s, and was close to completing the Bachelor of Science degree in Pharmacy that he started at St. John’s College of Pharmacy in 1947 on the campus in Brooklyn, NY.

“The Brooklyn campus of St. John’s was the perfect location for me to earn my degree because I could take the subway to school and then take the subway to work at the drug store,” said Mr. Downing, who celebrated his 95th birthday in June.

For his second stint in the military, Mr. Downing wanted to serve his country as a professional pharmacist and was permitted to finish his pharmacy degree before reporting for the draft for the Korean War. He became supervising pharmacist in the US Army General Hospital in Frankfurt, Germany, the largest Army hospital in Europe. He would serve in that capacity for two years before returning to Brooklyn, and to Mellor’s, in 1953.

He worked at Mellor’s full time for 30 years, and then he went on to work at other pharmacies throughout Long Island, fully retiring in 2018 at age 91. “To this day, my New York State pharmaceutical license remains active,” said Mr. Downing, noting it will be current through 2025.

“I would prefer to still be working as a pharmacist if my health allowed for it,” he added. He still lives in the same home in Massapequa, NY, where he and his wife, Rosemarie—with whom he just celebrated their 60th wedding anniversary—raised their three children.

Mr. Downing is especially proud of his commitment throughout his career to uphold St. John’s Vincentian mission of helping those most in need. “That mission was especially important in carrying out my duties as a hiring manager,” he said. “It was my top priority to always seek to hire people who really needed the job.”