As a high school track star who ranked nationally in the top 10 for the 100-meter dash, Aaron A. Tolson ’97SVC was in the coveted position of being offered full athletic scholarships from seven universities, including St. John’s.

But Mr. Tolson, who was invited in 1992 and in 1996 to compete in the US Olympic Team trials, set one condition—his final selection depended upon which school would allow his passion for tap dance to thrive. “I wanted every school to know that I tapped and that it was important to me to be able to keep dancing while I was in college,” said Mr. Tolson, who began to learn his craft as a 10-year-old child actor.

While the other schools were reluctant to grant his request, St. John’s University stepped up for the athlete, who graduated from Memorial High School in Manchester, NH. “The University told me, ‘Of course you can tap dance here, as long as you do what you are supposed to do as a member of our track team,’” recalled Mr. Tolson, who said he would not have been able to attend St. John’s without the scholarship. “If I ever had to make that decision again, I would still choose St. John’s.”

“I started tap during my childhood but being able to dance at St. John’s made a big difference,” he added. “It helped to push me in the direction that I am in now.”

A New Hampshire native, Mr. Tolson built a career as a tap sensation. At 14, he danced in the Great Tap Reunion on the storied stage of the Apollo Theater in New York City, alongside tap icon Gregory Hines. His many other accomplishments include being a featured soloist and tap dance captain with Riverdance, a tour that included performing on Broadway and at Radio City Music Hall, as well as at national and international venues.

He formed the nonprofit organization New England Tap Ensemble in May 2007 to promote the art of tap in communities while fostering a sense of individuality in professional artists. From Montana to Moscow, Mr. Tolson has performed and taught at numerous festivals, including the Beantown Tap Fest, Chicago Human Rhythm Project, Tap Kids, Brazil International Tap Festival, and Tap United. 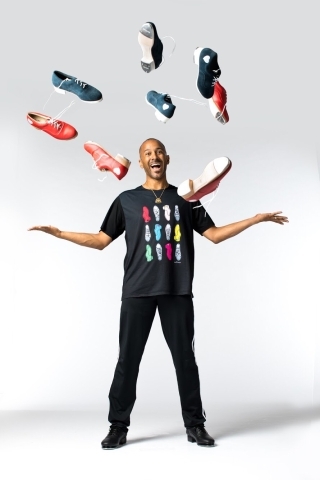 He now brings his talents to his job as Associate Professor of Dance at the Boston Conservatory at Berklee College of Music in Boston, MA, where he teaches tap. Mr. Tolson, who resides in Bedford, NH, with his wife and two young children, additionally teaches tap as Director of Speaking in Taps, a company that serves as a training ground for preprofessional youth and hosts The Intensive, a week-long event exclusively for advanced tap dancers.

During his time at St. John’s, Mr. Tolson delivered on his promise to be a committed member of the track and field team. He set several records that still stand today, including one for the men’s outdoor, 200-meter dash, as well as one for the men’s indoor, 55-meter dash.

He also established a rigorous routine. On a typical day, track practice followed his classes. Next came a round of basketball with track teammates. “Then, when my friends went off to the locker room, I would go into The Little Theatre, get up on the stage, and tap dance by myself,” said Mr. Tolson. “Sometimes, the theater was closed, so it was not always easy to get in there. But I danced on that stage very often. And all of that stuff demanded a lot of energy!”

He frequently traveled into nearby Manhattan to take classes taught by tap legend Savion Glover, whom he befriended years ago when they met as teenagers at an audition. He also participated in tap jams, where tap dancers improvise to music, at Swing 46, a jazz and supper club in New York City.

Mr. Tolson entered St. John’s as a mathematics major, but later switched to pursue a Bachelor of Science degree in Communications in St. Vincent’s College, now known as The Lesley H. and William L. Collins College of Professional Studies. “I wanted to learn how to be behind the camera so I could get in front of the camera someday,” he explained.

He is grateful for the hands-on experience gained by working and studying in the University’s Television, Film, and Radio Center.

“I took classes in every facet of the entertainment field. I thought it was such a gift when I was able to work at a radio station that was live at the University. It was so cool that the television studio had real cameras that I learned how to operate. Everything felt right to me.”

He gained more experience during an internship at WCBS-FM 101.1, working in the marketing department of the Manhattan-based radio station.

Mr. Tolson also enjoyed the wide racial and ethnic diversity reflected throughout the St. John’s community. “St. John’s really helped to shape me as a person because it exposed me to a lot of different cultures,” he said.

He maintains strong ties to St. John’s through his “super close” friendships with five members of his graduating class. “I knew that I was making good friends while I was at St. John’s,” he said. “What I did not realize was that they would become like my family. We were all best men at each other’s weddings. We are all godfathers to our children.”

One of the things he likes best about St. John’s, he added, is its great reputation. “When I was a St. John’s student, I remember people saying to me that I was attending a well-known school, and the better known your school is, the more valuable your degree. It has really made a great difference in my work and life after graduation.”