The April 30, 1936 issue of "The Torch" student newspaper announced that the Very Rev. Edward J. Walsh, C.M., president, had signed a contract to purchase the Hillcrest Golf Club two months prior, on February 11. It would become the site of the future Queens campus of St. John's University. Over the next two decades, plans to start building the new campus were delayed several times, especially due to World War II. It was announced in 1946 that Henry V. Murphy would be the architect for the campus. Finally, at a luncheon at the Hillcrest Golf Club on June 18, 1953, the Very Rev. John A. Flynn, C.M., president, announced the plan to begin construction of the Queens campus on February 11, 1954.

In November 1953, the wooden running track was moved from the Lewis Avenue campus to the Hillcrest campus site. The Redman 2-mile relay team was the first group of students to utilize the site. The Hillcrest Golf Club was closed to the public on December 31, 1953. Bill Kenny was the last golfer to play the Hillcrest course.  On October 16, 1954, an outdoor Field Mass was the first Mass to be offered on the new Hillcrest campus, as part of the annual Alumni Day for the St. John's College Alumni Association.

The groundbreaking of the first building on the Hillcrest campus, St. John Hall (also known as the Liberal Arts Building) took place on February 11, 1954. On September 28, 1955, the Annual Alumni Career Clinic was held in the new Liberal Arts Building, and the "Torch of Knowledge" relay run was completed by the varsity cross-country team, bringing the traditions of the old Lewis Avenue campus to the new Hillcrest site. Classes began at the new “Long Island Division” on October 3, 1955, with an incoming freshman class of 561 students.

On October 7, 1955, the Very Rev. John A. Flynn, C.M., president, celebrated the first mass of the school year and gave the liturgical blessing for the Long Island Division in the new Liberal Arts Building. Then on December 7, 1955, the building was dedicated to the Immaculate Heart of Mary after the cornerstone laying by Most Rev. Thomas E. Molloy, Archbishop-Bishop of Brooklyn and Chancellor of the University.

On January 15, 1956, the Department of the Army Corps of Engineers of the United States of America leased a plot of land from St. John's University along Goethals Avenue and 168th Street for a period of 50 years, expiring on June 30, 2006. Groundbreaking for the U.S. Army Reserve Training Center took place on June 11, 1957. The building was constructed by the United States Government, and was not technically a St. John’s University building at the time. The Dedication and Memorial Ceremony of the Second Lt. Thomas J. McDonald Army Reserve Training Center, in honor of a former St. John’s student who was killed in action during World War II, occurred on March 15, 1959. Today, the building is commonly known as the ROTC Center. 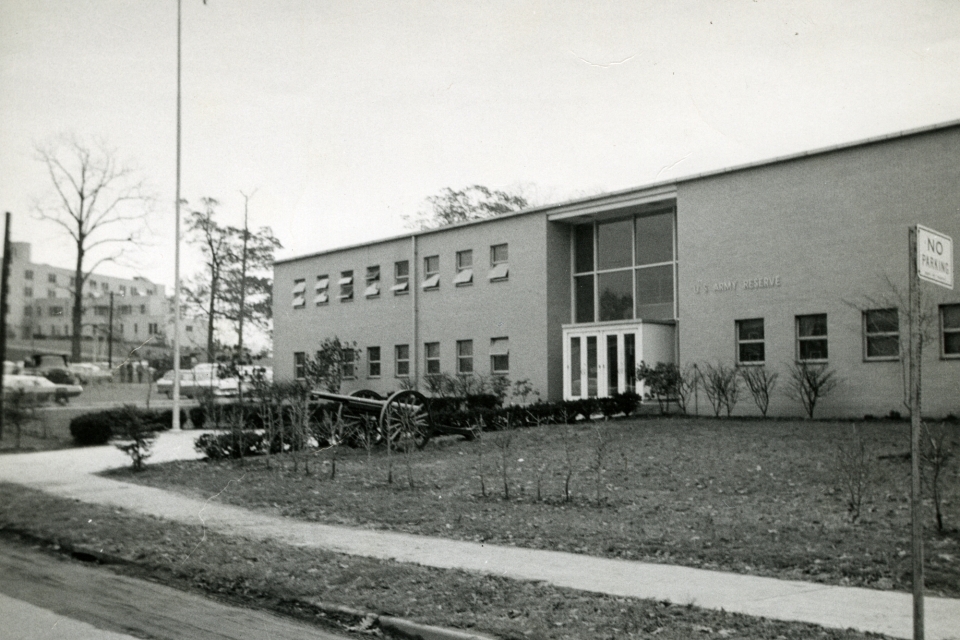 The groundbreaking for St. Albert the Great Hall (also known as the Science-Pharmacy building) and St. Vincent de Paul Hall (also known as the Faculty Residence or the Monastery for the Vincentian Fathers), took place just after the annual commencement ceremony on June 10, 1956. The Solemn Dedication Ceremony for the two buildings was held on November 6, 1958. Silent footage of the ceremony can be viewed online here.

Groundbreaking for an athletic center was held on October 11, 1958. The laying of the cornerstone took place on June 27, 1961. When Alumni Hall athletic center opened on December 4, 1961, the center housed a swimming pool, a theatre, classrooms, a 6,000 seat gymnasium, an auxiliary gym, squash and handball courts, fencing rooms, and classrooms. On November 23, 2004, the stadium was rededicated as “Carnesecca Arena” in honor of Coach Lou Carnesecca.

On August 14, 1962, a groundbreaking ceremony was held for three new buildings, Perboyre Hall (the Administration Building), St. Augustine Hall (the Library) and St. Louise de Marillac Hall (Classrooms). The Blessing and Dedication Ceremony was held on April 27, 1965. When classes begin in Marillac Hall in 1965, the new building was also the home of the Closed Circuit Television Center.

The Chapel of Our Lady of Lourdes was completed in 1964 at the same time St. Augustine Hall, Marillac Hall, and Perboyre (now Newman) Hall were constructed. It was located in the L-shaped part of Marillac, next to the library building. It had more space than the temporary chapel inside of St. John Hall, seating up to 520 people, but still was not the freestanding church originally envisioned in the 1950s Master Plan.

The chapel was renovated in 1972 by architect Donald Shepperd. It was at this time that the four stained glass windows from the Chapel of St. Vincent de Paul at 72 Schermerhorn Street, Brooklyn were moved to Our Lady of Lourdes. In 1977, A new sign with the name "Chapel of Our Lady of Lourdes" was added to the front of the building.

Our Lady of Lourdes served the campus for many years; numerous St. John’s students and alumni were married there. The chapel was decommissioned in 2004 upon the opening of the University’s new, freestanding, St. Thomas More Church. The area under Council Hall is now called Lourdes Hall. 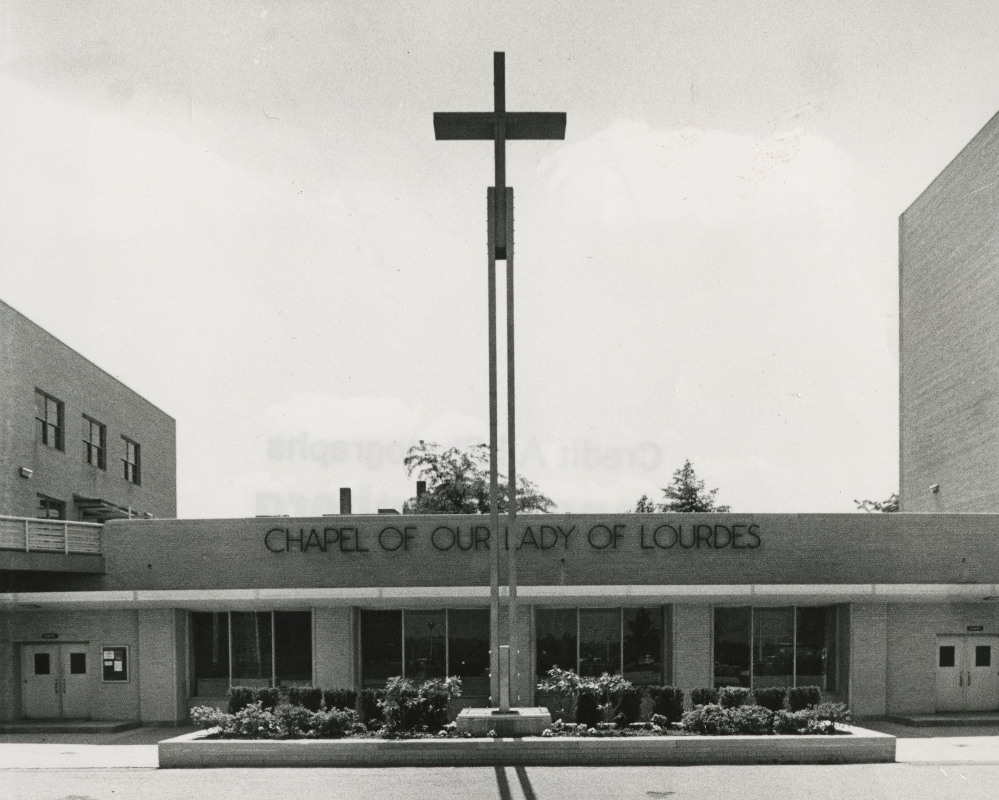 St. John’s Stadium was completed in 1964 at the same time St. Augustine Hall, Marillac Hall, and Perboyre (now Newman) Hall were constructed. It consisted of a large concrete grandstand in front of the running track.

On October 23, 1988, a new stadium named DaSilva Memorial Field was dedicated in honor of John DaSilva, a former St. John’s student-athlete killed in an automobile accident in 1981. Today, the stadium includes a running track and a lacrosse field. 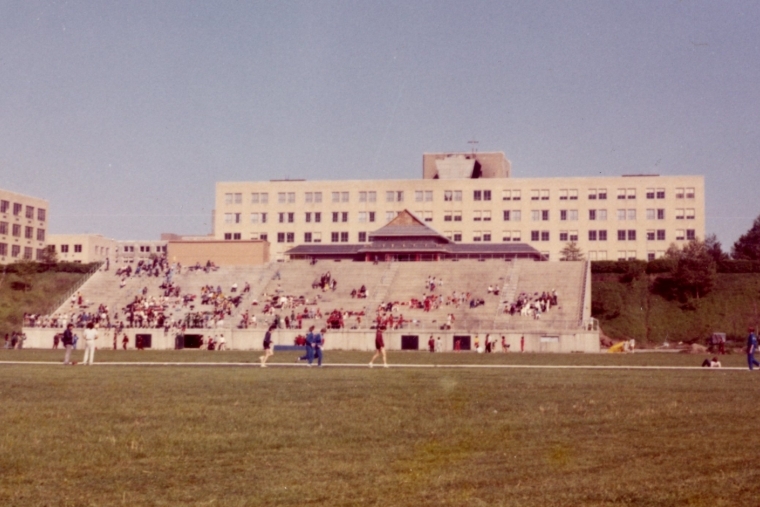 On November 21, 1970, construction began on Fromkes Hall, the new home of the School of Law on the Queens campus, after its move from the Schermerhorn Street, Brooklyn campus. The building was dedicated on October 20, 1972 and named after Col. Sol Fromkes, ‘28Law, and Mrs. Fromkes.

The Groundbreaking Ceremony for Finley Hall, a new addition to Fromkes Hall, took place on June 8, 1991. It was named after Leon Finley, ’29Law. The Opening and Rededication ceremonies took place on Sept 30-Oct 3, 1994. The Rededication Ceremony of The Bernard and Lorraine Rittenberg Library of the School of Law, located in Finley Hall also took place on October 3, 1994.

Then on September 17, 1995, a Dedication Ceremony was held for Belson Hall, named after Jerome and Maxine Belson (formerly Fromkes Hall).

Tentative plans for a campus center were first announced in February of 1969. Construction began in 1971, and on February 14, 1972 the University Center opened, containing the Rathskeller (bar serving beer), a dining area accommodating 700 persons, a lounge, game room, check room, and meeting rooms, as well as administrative and student activities offices. There was previously a Rathskeller in Marillac Hall, which was later converted for other purposes when the University Center Rathskeller opened. 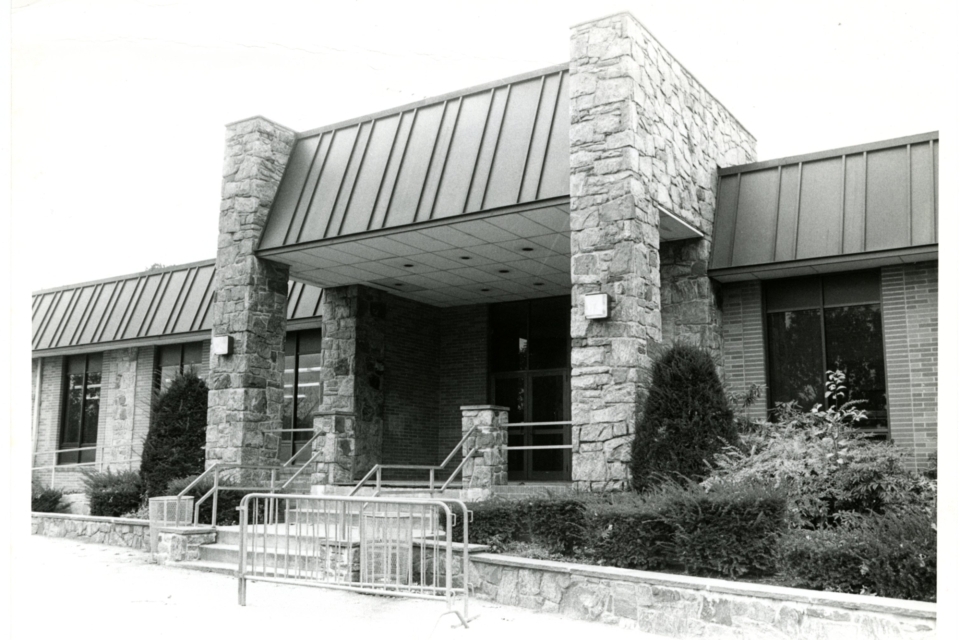 The groundbreaking ceremonies for a new Asian Studies Center took place on October 8, 1971. The Torch announced in an article on February 11, 1972 that although the building was originally going to be constructed on Union Turnpike between Alumni Hall and the Tennis Courts, the building was relocated to the rear of St. Augustine Hall. The Dedication Ceremony for the new building, named after the founder of the Republic of China (Taiwan), Dr. Sun Yat-Sen, was held on September 8, 1973. 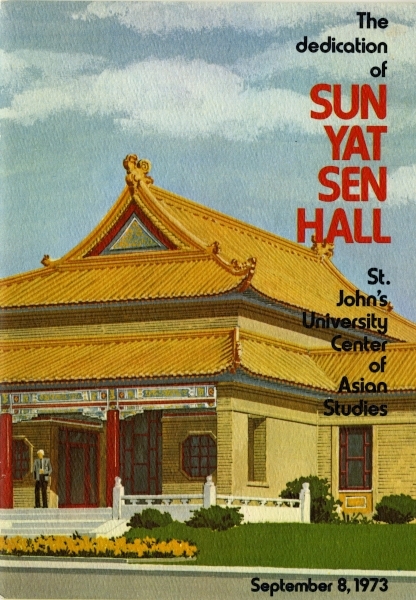 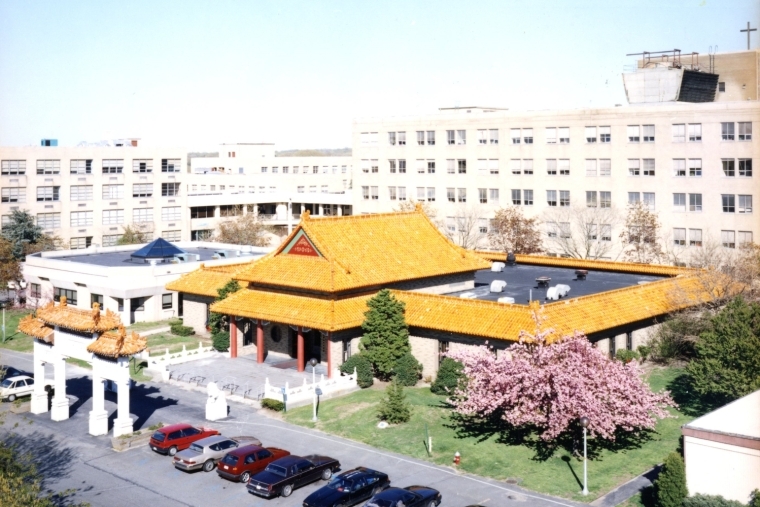 Bent Hall was dedicated on September 18, 1981 named after Bruce Bent, class of 1961 and then a trustee of the university. The building became the new home of the College of Business Administration (renamed The Peter J. Tobin College of Business in 2000). 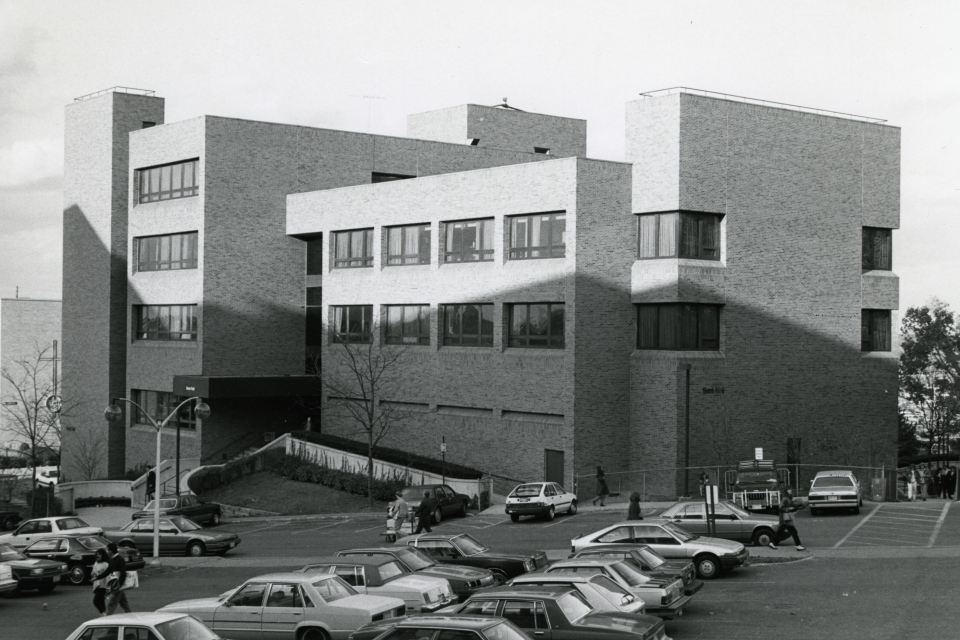 Council Hall, located above the Chapel of Our Lady of Lourdes (between St. Augustine Hall and Newman Hall), was dedicated in October 1985. It was named in honor of the members of the University Council. Today it is the home of the Welcome Center. 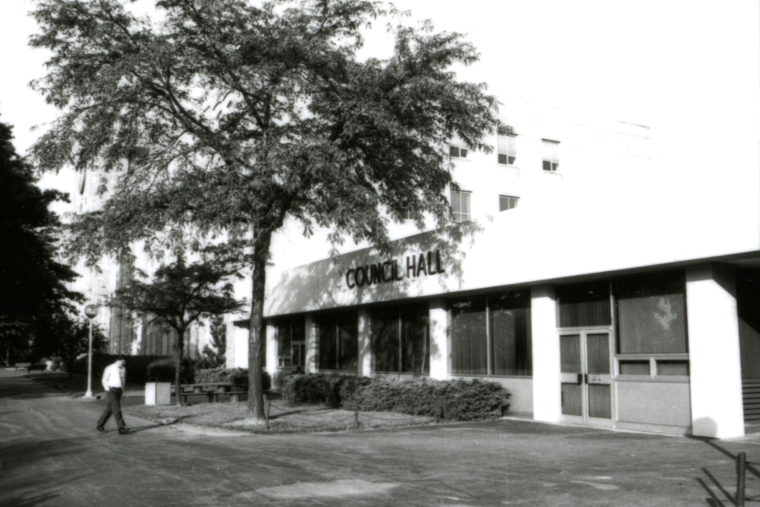 Construction on Sullivan Hall began in February 1988. The Cornerstone and Dedication Ceremony was held on August 12, 1989. The building was named after Eugene J. Sullivan, class of 1942 and then a trustee and professor at the university. 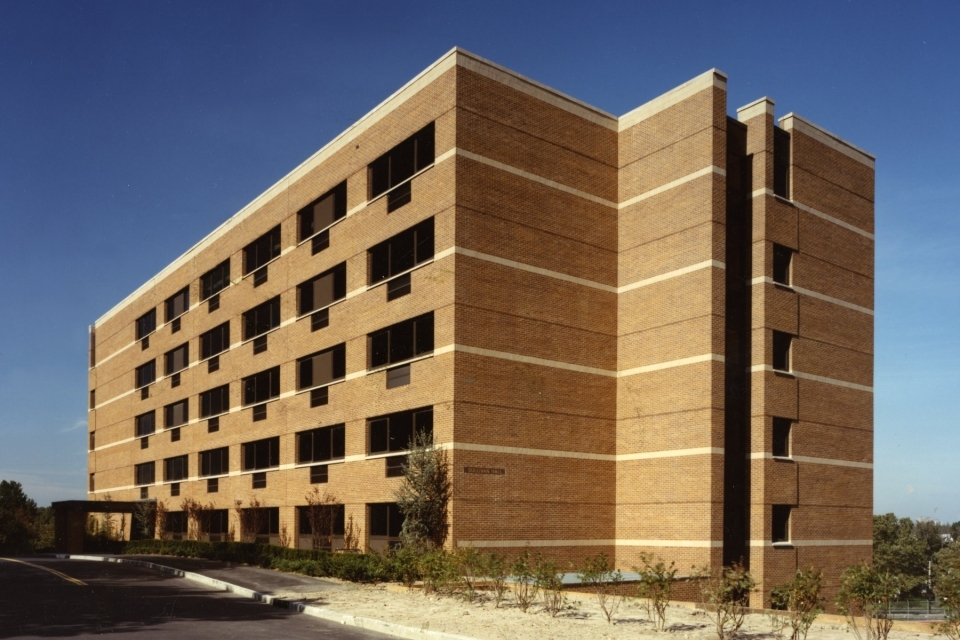 In the Fall of 1989, the baseball diamond was renamed McCallen Field in memory of the late Rev. Thomas J. McCallen, C.M. In June 2000, “The Ballpark at St. John’s” was opened. Then on May 5, 2007, the stadium was renamed Jack Kaiser Stadium in honor of Coach John W. “Jack” Kaiser. 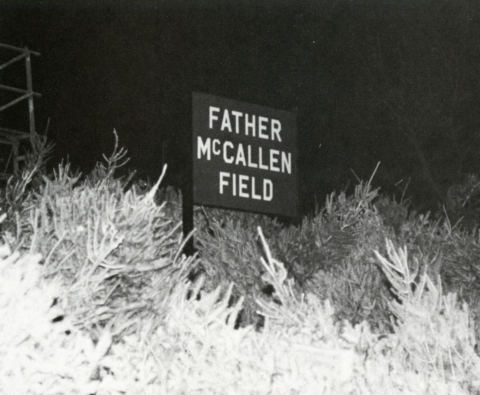 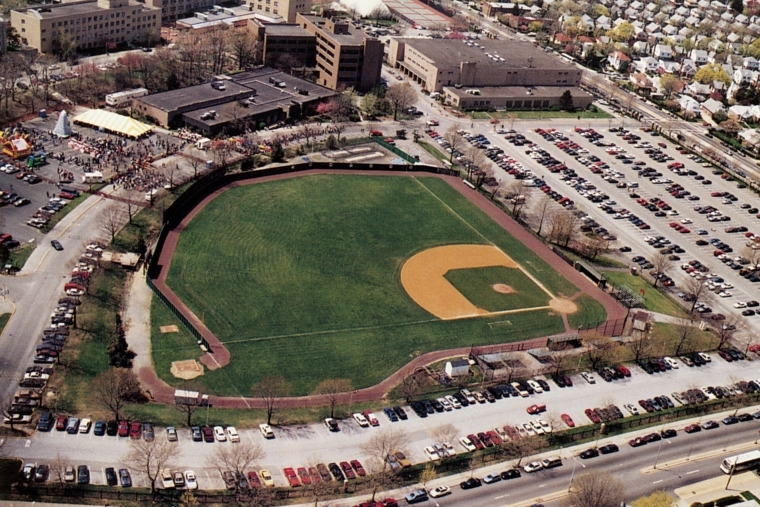 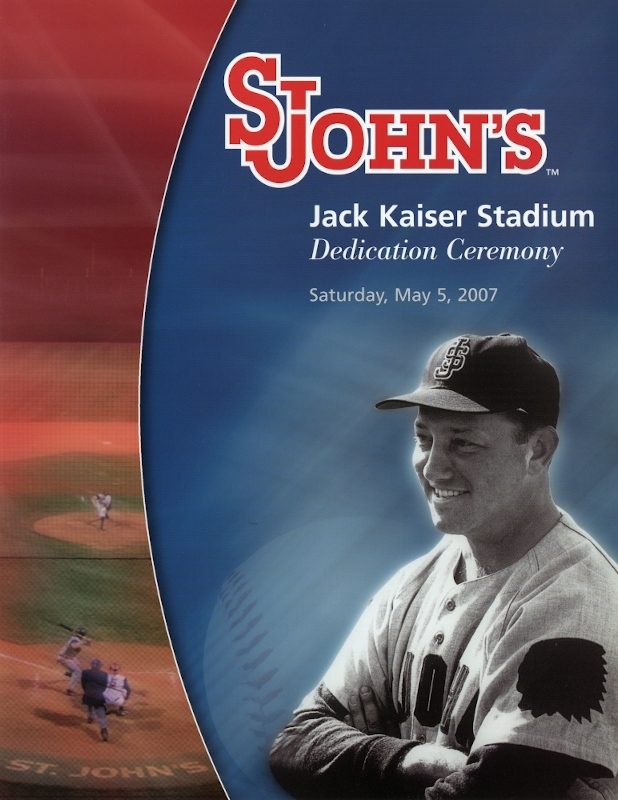 Construction for Chiang Ching Kuo Memorial Hall began on October 31, 1991. The building was dedicated on April 3, 1993. With a gift from the Republic of China (Taiwan), it was named as a memorial to its late President Chiang Ching Kuo, son of Chiang Kai-Shek. Commonly known as the “CCK” building, today it is the home of University Career Services.

On April 8, 1998, St. John’s University announced that it would soon construct its first residence halls on the Queens campus. 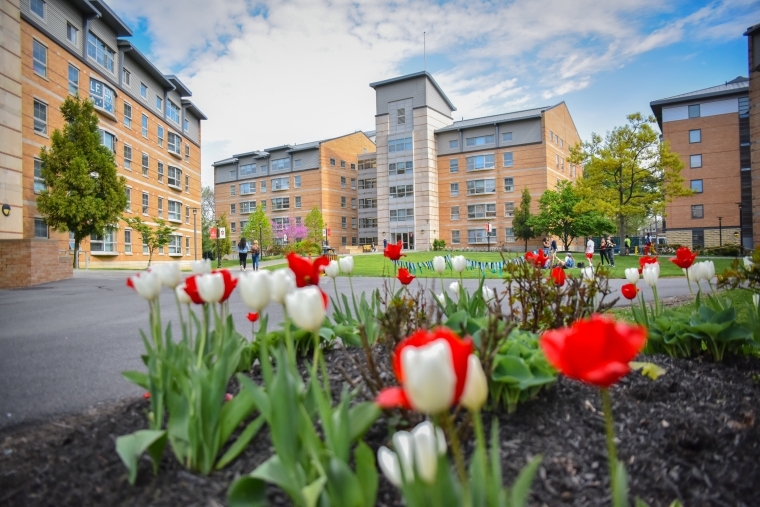 In January 2000, Montgoris Dining Hall opened next to the Residence Village. It was dedicated on October 14, 2000, named after William J. Montgoris (’67CBA) and his wife Peggy. 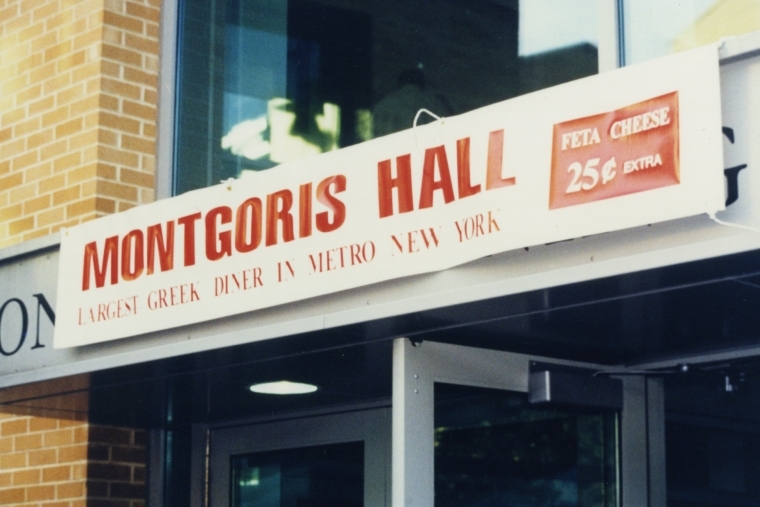 On May 6, 2001, Red Storm Field became the new home of the softball team. The field is located behind the Residence Village. 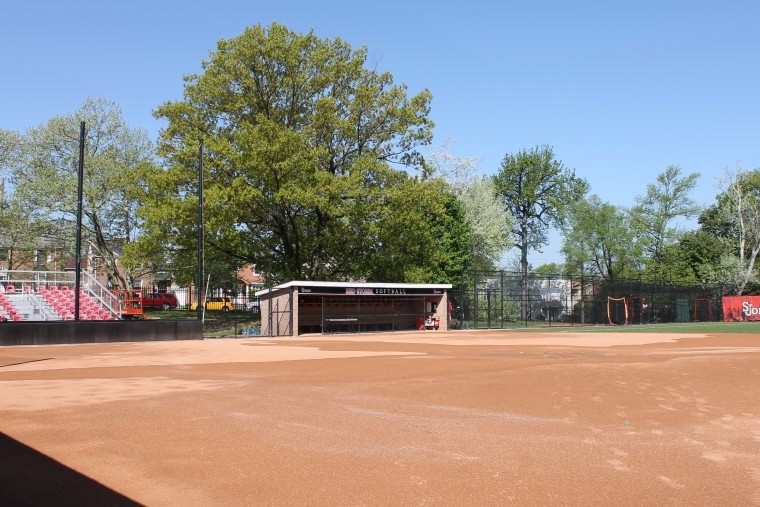 Ground was broken for the new Belson Soccer Stadium on February 1, 2002. The dedication ceremony took place on September 21, 2002. The stadium was named in honor of Jerome and Maxine Belson, and their son Tad. It was constructed on a raised platform to allow for a parking lot underneath. 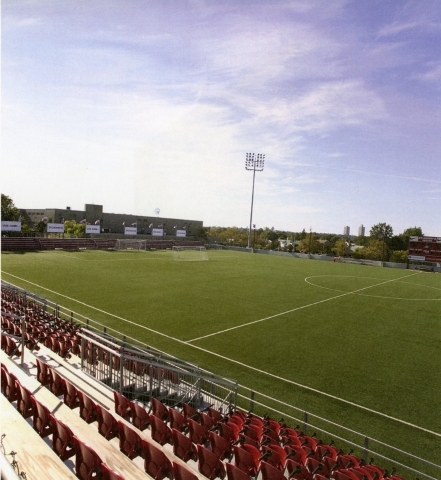 On April 4, 2000, it was announced that a donation from Jerome and Maxine Belson would enable the renovation of the 200-seat Moot Courtroom at the Law School. The newly renovated Belson Moot Court Room was dedicated on April 9, 2002. 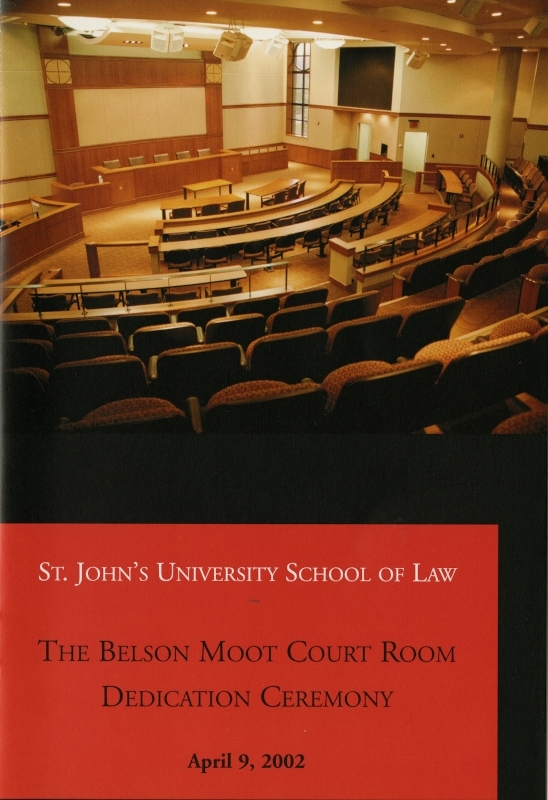 On October 1, 2002, a Groundbreaking and Blessing Ceremony was held for the new St. Thomas More Church. Construction began in May 2003, and the Blessing of the Foundation was held on September 12, 2003. A ceremony for placing stones with personal intention in the foundation beneath the altar took place on November 21, 2003.

The Cross Raising Ceremony and Procession from the Chapel of Our Lady of Lourdes was held on April 13, 2004. The Opening School Mass, which was the celebration of the First Mass in St. Thomas More Church on the Feast Day of St. Vincent de Paul, was celebrated on September 27, 2004. A formal dedication ceremony took place on November 21, 2004. 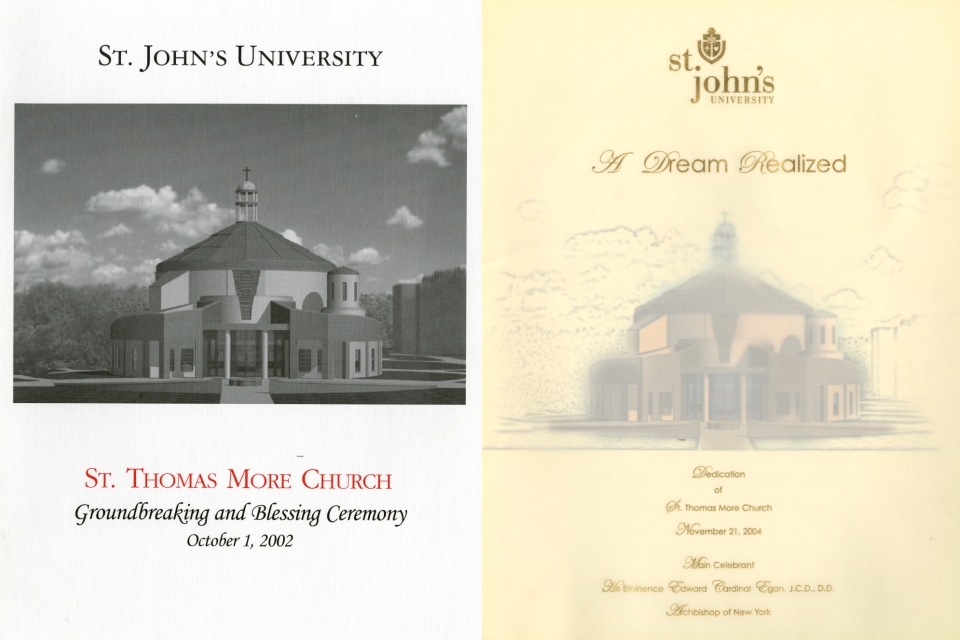 The new Belson Press Box and VIP Suites were completed in 2004.

The construction of a new Athletic Field House was announced on December 2, 2003. The Taffner Field House Blessing and Dedication Ceremony was held on September 8, 2005. The building was named after Donald and Eleanor Taffner. Eleanor served as a trustee of the university, and Donald is an alumnus.

On April 10, 2006, a Blessing and Ribbon Cutting Ceremony for the new Center for Community Services at the Seton Complex on Union Turnpike was held. The Seton Complex became the home of the Center for Psychological Services, the Speech and Hearing Center, and the Reading and Writing Education Center. 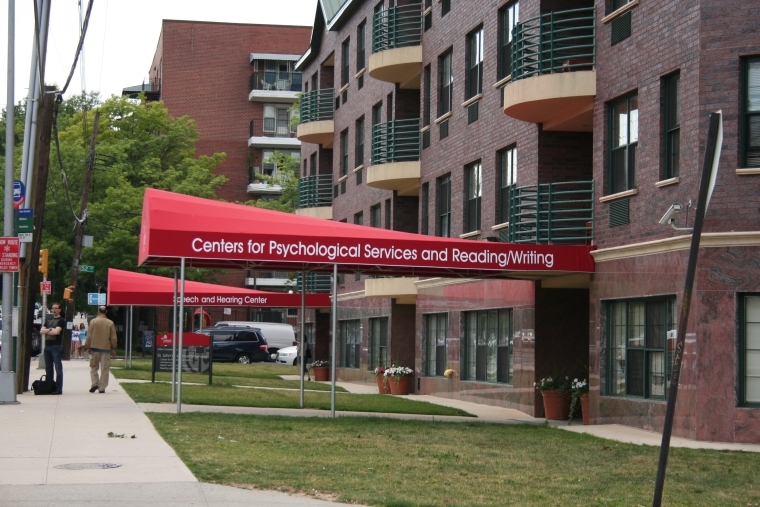 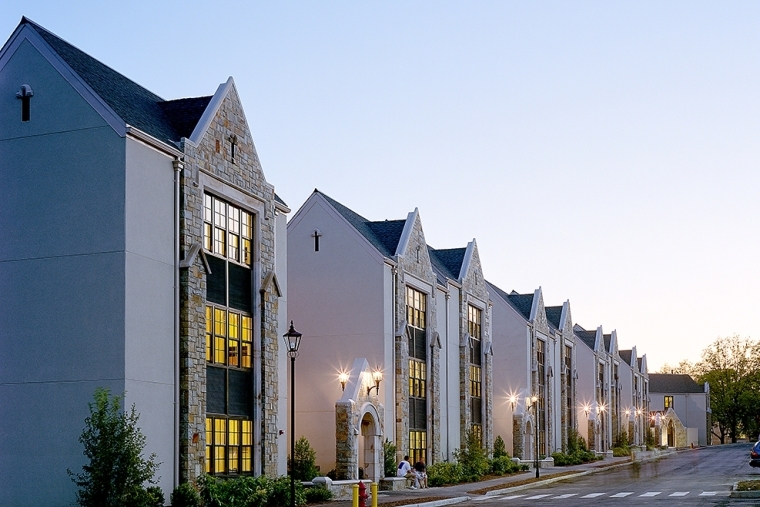 The Rev. John B. Murray, C.M. Priest Residence opened in December 2007, as the new home for the Vincentian Fathers after they moved out of St. Vincent Hall.

Construction began on a New University Center/Academic Center in March 2008. The Steel Beam "Topping Off" Ceremony (the last steel beam hoisted into place) took place on September 19, 2009. On October 4, 2009, a Blessing and Dedication Ceremony for the new campus center was held. It was named the D’Angelo Center after trustee Peter (’78 MBA) and Peg (‘70Ed) D’Angelo and their family. It is commonly known as “DAC” by the students. 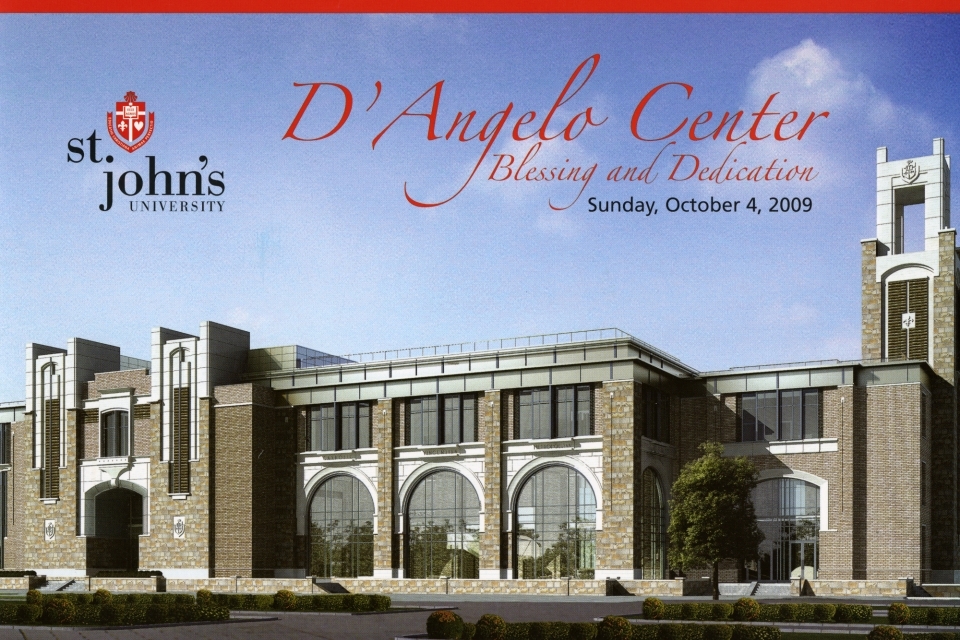