The Vincentian Fathers were the primary faculty in the early years of St. John’s College. Rigorous training in Vincentian seminaries and their pious nature lent itself to strong academic programs and spiritual guidance in the college, parochial and preparatory schools, and the seminary at St. John’s.

St. John’s opened its doors for the first day of class on September 5, 1870. The newly constructed College Hall contained classrooms, an auditorium, and living quarters for the faculty - all priests of the Congregation of the Mission (the Vincentian Fathers). Forty-seven students registered on the first day of classes, but by the end of the academic year there were over one hundred enrolled. By 1872, the building was quickly expanded to include a five story section with administration offices, reception rooms, a chapel, and a recreation room. (Source: The Radiant Light)

There was no formal distinction between the college students and preparatory (high school) students. The 1871-1872 course catalog explains, “When any one enters the Institution he is examined and placed in the class for which he is found prepared.” Within the first decade, the preparatory and collegiate courses became distinct programs. A separate building for the Prep opened in 1927 across the street from the college on the northwest corner of Lewis Avenue and Hart Street. Still standing today, this building was named the “Moore Memorial Building” in honor of Fr. Moore, the 7th President of St. John’s College. St. John’s Prep was affiliated with St. John’s University until 1958. In 1981, St. John's University announced an affiliation agreement with Mater Christi Catholic High School, a co-educational high school in Astoria, Queens, thus creating a new St. John's Prep.

This Diploma is to certify that Terrence J. Reilly, having completed the Commercial Course of Studies, prescribed by the Faculty and having passed satisfactory Examinations thereon is declared to be a competent Accountant and Book keeper. In Testimony Whereof, witness our Signatures and the Seal of the College affixed.
St. John’s College, Brooklyn, June 24th, 1889
J. A. Hartnett, C.M., President
James Durkin, C.M., Secretary 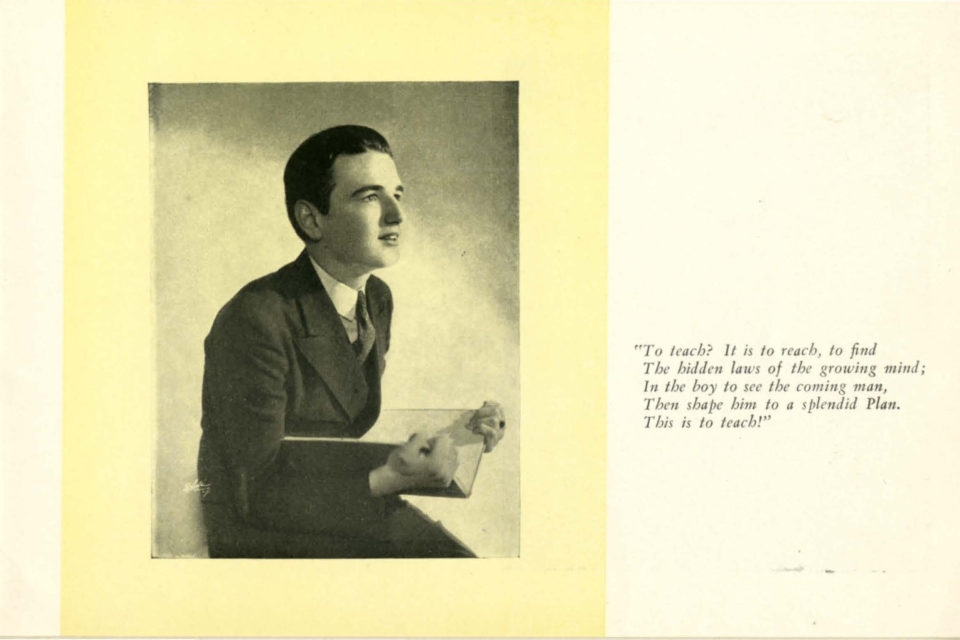 The Parochial School for Girls began as early as 1873. That same year, the priests made a stern announcement to the parents of the parish reminding them of the necessity of a Catholic education. A separate Male Department began by 1890 as evidenced by the Program and Admission ticket shown below. The school moved into a new building across the street from the college on the southwest corner of Lewis and Willoughby Avenues in 1903; this building still stands today.

Left page: “The Parochial School for girls will open on the first Monday of September. Parents wishing to +c…”

Right page: “The Sisters will be in attendance to See Parents + children every day of the coming week, from ten to twelve o’clock in reference to the School. Music will be taught to those pupils who desire it. We want it distinctly understood, that Parents will not be allowed to Send their children to the Public School. This we will inforce [sic]. Parents are obliged by Divine law to make every effort to give their children a Christian + Catholic education.”

In honor of the 50th anniversary of the ordination of Bishop Loughlin in October 1890, the members of the parish wanted to help realized Loughlin’s long-held dream of a seminary in Brooklyn. “One of the fundamental objects of Lazarists [Vincentians] is the training of an exemplary clergy.” (Brooklyn Daily Eagle, May 12, 1889)

The cornerstone of the seminary was laid by Bishop Loughlin on September 8, 1889. The seminary wing, attached to St. John’s College Hall, was located on the southeast corner of Lewis Avenue and Hart Street. The building was designed by Patrick C. Keeley, also the architect of College Hall and the Church of St. John the Baptist. The first group of students, 52 in total, were received on Sept 21, 1891. Unfortunately, Bishop Loughlin died three months later on December 29, 1891.

The prospective seminarians were required to complete a full six years of preparatory coursework at St. John’s College to prove their educational merit. They were also required to demonstrate their piety and devotion to the priesthood for acceptance into the seminary for six years of religious training. (Brooklyn Daily Eagle, September 7, 1890) Further demonstrating the rigor of their training and studies, the seminarians and college students were apparently living quite separately from each other, despite their proximity on Lewis Avenue, “The workings of the seminary will in no way interfere with the course of study in the college, the students of which will on no occasion be permitted to hold conversation or intercourse with the seminarians.” (Brooklyn Daily Eagle, July 26, 1891)

Rev. Msgr. Charles E. Diviney, P.A, who completed his seminary training at the St. John’s Seminary, provided an account of his experiences and described the seminary building. Located on the South wing of the Lewis Avenue campus, it was the only major seminary in the diocese of Brooklyn. “There were approximately 70 student rooms, a chapel, class-rooms, a dining hall, a recreation room with two bowling alleys, and two pool tables.” Rev. Diviney recalled, “Carey Field, the college's baseball diamond, was our only outdoor recreation facility, but occasionally we would be permitted to swim in the prep school pool and play handball there.” (Alumni Quarterly Spring 1986) A reporter described the seminary’s dormitory rooms as comfortable but not elaborate, and neat; they contained an “iron bedstead, clothes closet, desk, washstand, and gas fixtures, and is provided with a large window, looking out either upon the street or a beautiful courtyard.” (Brooklyn Daily Eagle, July 26, 1891)

From 1891 to 1930, the Catholic population in Brooklyn had quadrupled, and the number of seminarians had increased so much that were sent to numerous other seminaries around the country. The last student entered in 1930. When it closed in August 1932, the program was moved to the new diocesan seminary in Huntington on Long Island. The total attendance over 41 years was 666 seminarians. (Radiant Light, page 39)

Brooklyn, Sept. 2, 1899
Rev. Dear Sir:
The corner stone of the new Seminary will be blessed and laid on Sunday, the 9th inst., at 4 o’clock p.m. It is desirable that some of the Reverend Clergy should be present, to show their appreciation of the good work.
Very respectfully, Your obedient servant in Christ,
John Loughlin, Bishop of Brooklyn

This prayer book published in 1894 was used in the St. John’s Seminary. 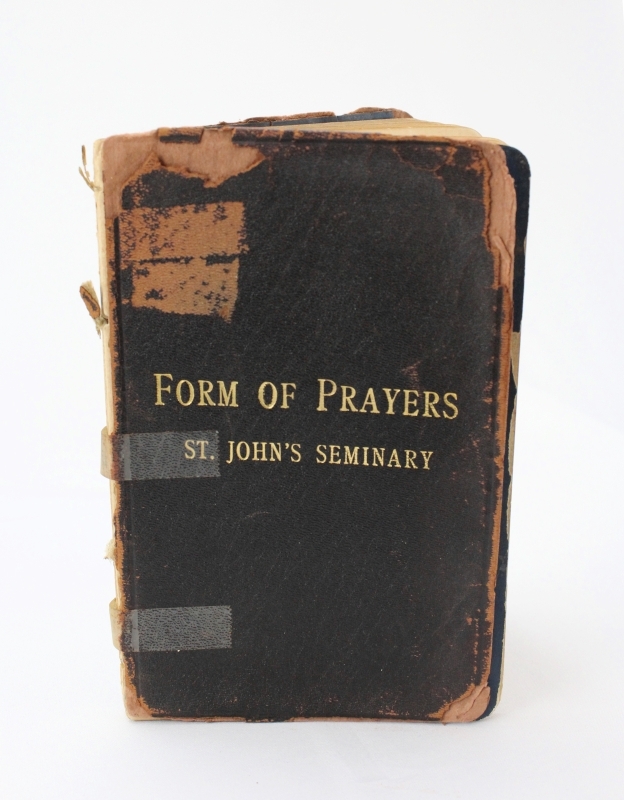 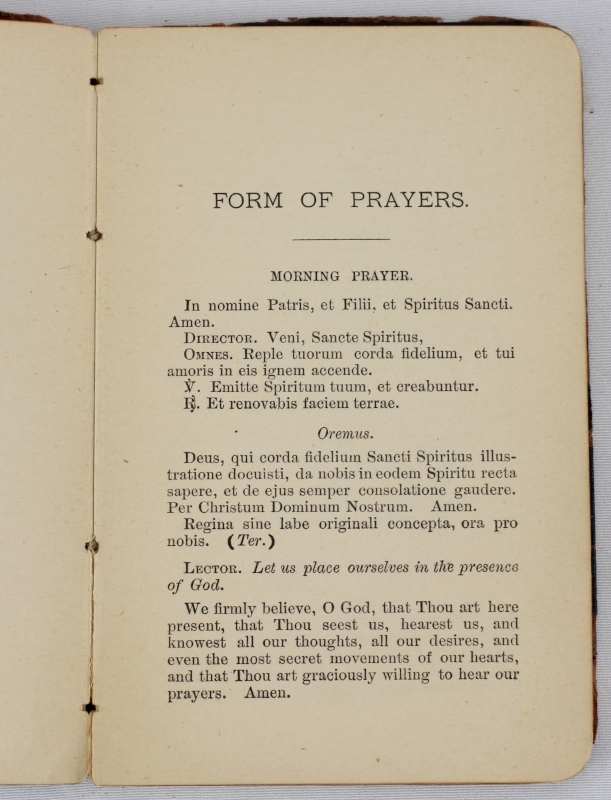