Since his undergraduate years at St. John's, Richard Martinez ’01CPS, ’13G has championed the Television Club (WRED-TV), where students learn to use state-of-the-art television equipment while writing, directing, producing, editing, and even acting in video productions. 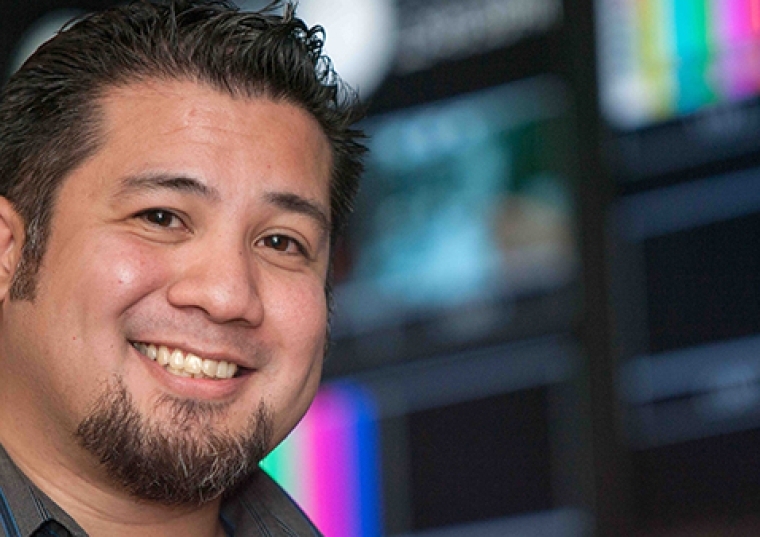 Since his undergraduate years at St. John's, Richard Martinez ’01CPS, ’13G has championed the Television Club (WRED-TV), where students learn to use state-of-the-art television equipment while writing, directing, producing, editing, and even acting in video productions.

Now a broadcast engineer at the University's Television Center, Martinez is a helpful presence on campus for current TV Club members. "As a student, I came to appreciate the breadth of TV Club history,” he said. “After graduation, as I connected with more alumni, I loved hearing all their stories. It made me appreciate the contributions of everyone who came before me.”

Martinez provides continuity for students and alumni, helping plan reunions, and serving as a goodwill ambassador.In addition to his full-time work at the Television Center, Martinez imparts his TV broadcasting know-how to students as an adjunct assistant professor of television and film. "I've always loved teaching and training people," he observed. “During my time in TV Club, I familiarized myself with all the equipment and shared my knowledge with younger students. Older students were responsible for teaching new members, and I made sure to foster their interests."

A communication arts major, Martinez arrived at St. John's determined to carve out a career in radio. He joined the campus radio station WSJU and was running his own morning show by the spring semester of his freshman year. "I loved my time at WSJU,” he said. “While I was there, I met a lot of people from TV Club who convinced me to try it."

It wasn't long before Martinez realized he had found his niche. "The club provided a really professional learning environment,” he said. “People were more than willing to help you. It was serious business, but it was fun, too."

The summer before his final year at St. John's, Martinez was hired by ABC Television through a program instituted to train students who could then work their way up through the ranks. During this time, he worked as a camera operator on the soap operas "One Life to Live" and "All My Children."

In 2001, he left ABC for Rainbow Network Communications (later known as AMC Networks), where he served as a master control operator (someone who works in the control room to ensure the quality and accuracy of on-air programs) and later as an associate director.

After seven years, Martinez learned that an engineering position was available at his alma mater. In 2008, he returned to St. John's as an assistant engineer, maintaining and repairing equipment while keeping abreast of trends in TV broadcasting technology. It’s a role he relishes.

"I enjoy finding creative solutions to problems,” he said. “When a class is in session, you need to find a temporary solution, and when it's over, you can explore the problem in depth. I never have a typical day."

Since then, he's become a bridge for TV Club alumni and students. "The alumni put a lot of time and energy and passion into this place and feel protective of it,” he explained. “I want to make sure students 'get it.' It's a place to learn, but for many it's a second home.”