When Kevin James ’11C, ’13MBA was a student at St. John's University, he strived to integrate the Vincentian mission of service into his everyday life. Now, as an assistant dean in the College of Professional Studies (CPS), he uses those experiences to help inspire the students he advises every day. 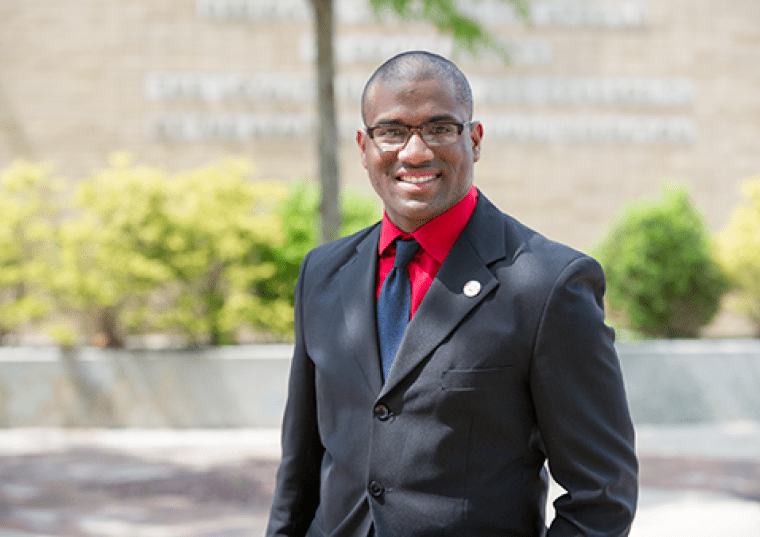 When Kevin James ’11C, ’13MBA was a student at St. John's University, he strived to integrate the Vincentian mission of service into his everyday life. Now, as an assistant dean in the College of Professional Studies (CPS), he uses those experiences to help inspire the students he advises every day.

“Growing up, I always wanted to help people,” he stressed. “St. John's gave me a focus and a mission in life and helped me unlock my full potential. I had great people here counseling me. Now, as an advisor myself, I meet with students who are close to my age and feel like they can talk to me.”

Kevin believes that studying at SJU’s close-knit Staten Island campus contributed to his success."Staten Island provides this intimate experience,” he noted. “Everyone works very closely there. The great thing about the community is that once you're involved, those connections almost build themselves."

The relative proximity to his home in East Flatbush, Brooklyn, was an additional draw. “I wanted the full college experience, but at a local level,” he said. “The Staten Island campus is right across the Verrazano Bridge, not too far from home, but it gave me the freedom to grow, explore, and discover what the future held for me."

As an undergraduate, Kevin was a government and politics major in St. John’s College of Liberal Arts and Sciences. He participated in several campus organizations, including the St. Vincent de Paul Society, Campus Ministry, and Student Government, Inc.  He ultimately was selected for the President's Society, the highest honor a St. John's student can receive. "I learned how to manage organizations and how to work with disparate people,” he said

His association with CPS began when Kevin was hired as a student worker by James O'Keefe, Ph.D., vice provost of the Staten Island campus, who was then associate dean for academic affairs. "It's been a great journey with him these last few years,” Kevin said. “Dr. O’Keefe hired me again as a graduate assistant on the Queens campus, so CPS has really been my home."

Upon graduation, Kevin worked as a marketing analyst at Publishers Clearing House, an experience he considers invaluable to his formation as a professional, before returning to St. John's as an assistant dean. During this time he also earned his master's degree in business administration from St. John's.

His role at CPS is more than just advising students. “I'm handling the College’s budget and marketing,” he said.  “I understand who we are, our brand, and how to enhance the appeal of CPS. I think it's going to be a great time for us."

"Working with students is not just a job,” Kevin noted. “It's a role I take seriously. I encourage them to stay involved in clubs and activities they find meaningful. If you become content with the status quo, you fall into a gap where you don't advance or grow. If you push yourself to that next level, that's what makes all the difference."