From Basketball Walk-On to Biotech Wunderkind

With the heart of a champion and an incomparable intellect, former Red Storm guard Jonathan Scheiman, Ph.D. ’03C is the driving force behind a biotech startup that is at the crossroads of science and sports.

Raised in Greenwich Village, NY, Dr. Scheiman attended Fiorello H. LaGuardia High School of Music & Art and Performing Arts, where he played the tuba. When not studying for exams or practicing his instrument, he could be found working on his jump shot on the basketball courts of Tompkins Square Park.

Despite attending the famous magnet school, he felt his skills were more suited for the hardwood as opposed to the stage. “Attending LaGuardia was one of the best experiences of my life,” he said, “but in all honesty, I really just wanted to play basketball.”

Dr. Scheiman fulfilled that dream when he enrolled at St. John’s University and was chosen as a walk-on for the Red Storm Men’s Basketball team. 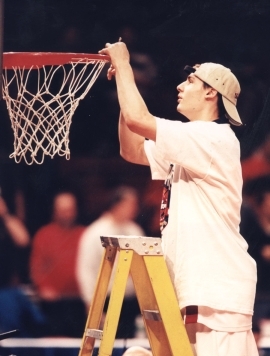 “It was an amazing experience. We won the BIG EAST Conference Tournament my freshman year, and we won the National Invitation Tournament my senior year,” he recalled. “My sophomore year, we beat UCONN at Madison Square Garden (MSG), and President Bill Clinton and Jay-Z were in the locker room with us after the game. It really was surreal.”

Inspired by frequent trips to New York’s numerous zoos, aquariums, and museums, Dr. Scheiman majored in Biology at St. John’s. “I loved learning about genotypes, phenotypes, natural diversity, and evolution, so biology seemed like the perfect choice for me,” he said. “My junior year, I took a genetics course and it really piqued my interest on the field. The following summer, I secured an internship at Princeton University, where I focused on molecular biology.”

His fascination with biomedicine led him to apply to the Sackler Institute of Graduate Biomedical Sciences at NYU, where his experience as an athlete and a musician played a pivotal role in his acceptance. “I told them I had a game that night at MSG and they thought I was in the pep band,” he said. “I told them I was on the basketball team and then we talked about basketball the whole time. It was a great home-court advantage.”

Upon earning his doctorate, he applied to Harvard Medical School and its Wyss Institute for Biologically Inspired Engineering, where he worked as a research fellow. “During my interview, I told them that my background was primarily in the arts and athletics,” he said. “That really set me apart from the pack. It turns out they were particularly interested in working with people who could think differently.”

Dr. Scheiman’s research at the latter led to the founding of FitBiomics, a sports biotechnology company that focuses on “sequencing the microbiome of elite athletes to identify and isolate novel probiotic bacteria for applications in performance and recovery.”

As Cofounder and Chief Executive Officer of FitBiomics, Dr. Scheiman often leans on the improvisational skills he honed as both a basketball player and a musician.

“At LaGuardia, I was in a jazz ensemble and we improvised all of the time. As a basketball player at St. John’s, we were always making in-game adjustments on the court,” he said. “It is the same thing being in a research lab, and it is the same thing as an entrepreneur—you are always improvising and learning on the fly.”

According to Dr. Scheiman, FitBiomics is attempting to better understand the biology of the fittest people in the world, what makes them unique, and what allows them to perform at an optimal level. They hypothesize that the microbiomes (a community of micro-organisms in our bodies) of elite athletes must have incredibly efficient probiotics in common that help with their performance and recovery.

“In our gut, there are good and bad bacteria and that bacteria/gut microbiome greatly influences energy and protein metabolism, neurology, and immunology,” he explained. “We are looking at super performers, in the form of elite athletes, for probiotic bacteria that drives optimal endurance, strength, mental toughness, and recovery.”

One example of this phenomenon involves ultramarathoners—runners who compete in endurance races that are often 100 miles in length. “We found that they have a bacteria in their gut known as veillonella,” he said. “It converts lactic acid into short-chain fatty acids, which can serve as an energy source and are anti-inflammatory. Our paper showed veillonella can promote endurance in pre-clinical studies.”

Ultimately, FitBiomics plans to harness the good bacteria from elite athletes and make it available to the general public. The company is currently beta testing a variety of probiotic strains ahead of a product launch. Their target consumer is everyone from professional and amateur athletes to everyday people who just want to improve their nutrition.

Dr. Scheiman, who coached high school basketball while he was in graduate school, is also interested in using sports as a gateway for getting young people interested in science. “I always joke that since I did not make the National Basketball Association, my backup was getting a Ph.D. in molecular biology,” he said. “I am a firm believer in exposing broader communities to science so that they can learn about their own biology, see the connection between sports and science, and ultimately, lead healthier lives.”