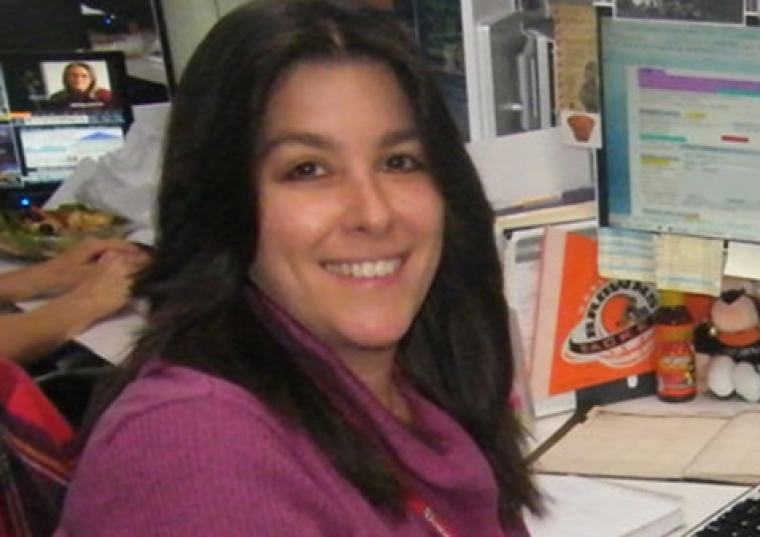 After Annette Lellis-DeFonzo ’92SVC arrived at St. John’s University, she followed an entirely different career path from the one she had envisioned. Currently a Field Production Manager at Bloomberg Television, Annette originally was interested in pharmacy. After two semesters, however, she decided it was not the right fit.

For a time, Annette’s major went undeclared, and she took a number of liberal arts courses for the next few semesters. By chance, she was enrolled in a class on the fourth floor of Marillac Hall, where the University’s Television Center is located. Intrigued, she peered inside one day and never looked back. “I was instantly smitten.”

Annette switched her major to Communication Arts. She joined the Television Club and landed a part-time job at the Television Center, assisting professors with their classes. “I jumped in with both feet. I wanted to learn as much as possible,” she said.

As a senior, Annette was elected Production Coordinator of the Television Club, a job that, in many ways, echoed what she does today. In that role, Annette was responsible for staffing crews for remote and studio projects done by club members.

Annette also served as a Board Member at the Television Club, which helped her develop a strong sense of how an organization operates. “I enjoyed being a part of the decision-making process.” This insight has served her well throughout her career.

Networking, Annette said, is an essential element of her industry. “It’s really who you know that gets you in the door so you can use what you know.” Many of the jobs she’s held came through professional contacts, she added.

At the outset of her career, Annette considered becoming an editor. “I loved the creative process. I liked taking a pile of tapes and creating a short story.” However, she soon learned that her talents lie elsewhere.

Prior to her position at Bloomberg, she worked full-time at the Ad Council, Metrovision Production Group and Magno Sound and Video. She also has freelanced as a producer.

Annette has worked hard to help fellow St. John’s alumni. “It’s a tough industry to break into,” she observed. “We all know somebody somewhere. We’ve all worked in many different places. It’s a finite industry in New York City. It takes perseverance.” She added that it isn’t enough to have connections: Professionals also need to develop a solid reputation among their peers.

While her job can be stressful, especially on a day when important news is breaking, Annette said she thrives on the pressure. Most of the requests she handles are to locate live-shot studios for guest interviews on that same day or the next. Large-scale, multi-camera live shows and interviews are also quite common, and require lots of time and logistical planning — and create more pressure.

Annette maintains a strong connection with the University, regularly attending Television Club reunions and alumni events. A glance at her desk reveals a St. John’s mouse pad. She proudly wears her class ring, and the lanyard holding her Bloomberg ID prominently features the St. John’s logo. “St. John’s,” she says with a smile, “was the best time of my life.”