An expert in 20th-century US cultural and technological history, Susan Schmidt Horning, Ph.D., Associate Professor in St. John’s University’s Department of History, is an engaging lecturer, celebrated author, and gifted faculty member. However, behind that public persona is a woman with a remarkable history outside of the academy—one that includes stints as a former rock and roll lead singer, guitarist, songwriter, and music pioneer.

“Having that sensibility of being a woman in a masculine-dominated industry has certainly been very formative for me,” she explained. “That’s why I’m working on a new project about the lost women of rock and roll.”

While her critically-acclaimed book, Chasing Sound: Technology, Culture & the Art of Studio Recording from Edison to the LP, illuminates the history of sound recording, her new book chronicles all-female rock bands in the 1960s, inspired by her personal experience as a member of one such band, The Poor Girls.

“It started as a little memoir, and I soon learned that there were many of these girl bands during the same time period,” she said. “You have never heard of most of them because they never got record deals, and they never became famous—but they were all over the world, and some were quite influential.”

Like many musicians, Dr. Schmidt Horning’s fascination with music dates back to her early teens. Despite growing up in Akron, OH—some 2,400 miles from the surf havens of southern California—she developed a keen interest in the culture, lifestyle, and above all, the music, of the West Coast.

“When I was 13, I discovered The Beach Boys. My plan was to head to California, marry Brian Wilson, and be in a band with him,” she joked.

Around that time, she and some friends decided to learn guitar, and at the suggestion of their teacher, they formed a band. “In study hall, we sent a note to a girl who played drums in the marching band and invited her to join our band,” she said. “She brought her green sparkle drum set over, we jammed on songs like ‘Wipeout’ and ‘Walk, Don’t Run,’ and we formed a band.”

The Poor Girls developed a solid repertoire of cover songs, found a manager who booked steady gigs throughout their junior and senior years of high school, and they built a following. 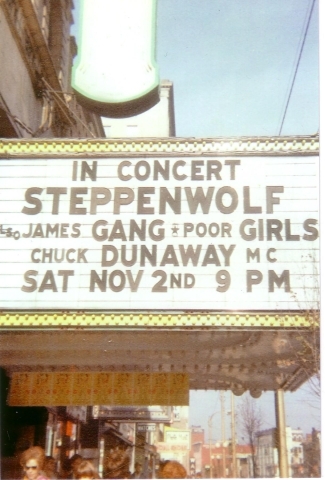 “We played mostly on weekends and over the summer and were booked as the opening act for bands like Cream, Steppenwolf, and The Measles and The James Gang (both of which featured a young guitarist named Joe Walsh, years before he would join the Eagles),” she said.

The band members remained close friends with Mr. Walsh, who even wrote them recommendation letters to the Berklee College of Music, where Dr. Schmidt Horning enrolled in the arranging and composition program in 1971 and studied guitar, voice, and violin.

“In some ways, it was a great time to be in a girl band,” she offered, noting that the music business was still male dominated, but “the all-girl band thing was still a novelty, so we likely got breaks that other bands may not have been afforded.” But sexist and dismissive attitudes toward women in rock still prevailed in the 1960s.

Like many young bands, The Poor Girls eventually broke up. However, Dr. Schmidt Horning and her bass player continued playing together in various bands.

In 1977, they met drummer Rich Roberts through a mutual musician friend, Mark Mothersbaugh, best known as a film score composer and the lead singer and keyboardist of the band, Devo, and they formed Chi-Pig, named after a local Akron restaurant. Her friendship with Devo’s front man would prove fruitful on two fronts—the band found a key addition to its rhythm section, and Dr. Schmidt Horning received a songwriting credit with a legendary band.

“Chi-Pig used to practice in my parents’ basement, and Mark would come over and hang out with us. Sometimes we’d start jamming together,” she explained. “Mark called Debbie later on and said, ‘Remember that thing we were playing in Sue’s basement? Well, it’s going to be on the next Devo record.’”

Both women received credit as cowriters of the 1980 Devo song “Gates of Steel” for their efforts. “I still get royalties, though I certainly can’t retire on it!”

Chi-Pig traveled to Miami, FL, where they were able to record an album during unbooked studio time. “Our producer, Bruce Hensal, was recording an album with Julio Iglesias at Criteria Studios in the daytime, but we were able to record there at night for free,” she said.

The band performed on the East Coast, and although they never secured a coveted record deal and eventually split up in 1981, they were able to convert the rough mix of the Criteria album on analog tape to digital and release their CD, Miami, in 2004.

With Chi-Pig disbanded, Dr. Schmidt Horning moved to New York in search of her next adventure. Fortunately, a friend from her hometown mentioned that his band’s label, ZE Records, needed a receptionist.

“ZE Records had great New York-scene bands, such as James White and the Blacks, and Kid Creole and the Coconuts,” she recalled. “It was fun. Our offices were in Carnegie Hall, and I was working with interesting people in the music business. I did some session work, and I even sang backup and played guitar on a few ZE albums.”

After some time at the label, she decided to shift gears and began attending Hunter College. She gave birth to her son, Nick, but not long after, her marriage ended. Realizing that she could not afford to raise a child as a single parent in New York City and stay in school, she moved back to Ohio.

“I finished my bachelor’s degree and went on to get my master’s at the University of Akron,” she said. “I had developed a love of history at Hunter College. I applied to a Ph.D. program at Case Western Reserve (now Case) University. I entered the program in the history of technology and science and was originally planning to pursue environmental history, but I had an epiphany on my drive to campus one day that I wanted to explore the intersection of technology and music.”

She continued, “I thought about my days with The Poor Girls, being in the recording studio, and what the engineer did to make us sound our best. That reflection led to interviews with sound engineers, which led to my applying for a National Science Foundation grant. I was awarded the grant, which supported my dissertation research, including dozens of oral interviews with recording engineers, producers, and musicians.”

She eventually donated those interviews to the Louie B. Nunn Center for Oral History at the University of Kentucky Libraries, and they have been used by scholars all over the world.

While her band days are long behind her, she still remains close to her friends from different bands and from her childhood, among them Chrissie Hynde, lead singer of the Pretenders. “Chrissie and I go way back—we were in Brownies together,” she said.

Dr. Schmidt Horning has been a fixture in St. John’s Department of History since 2007, a fact she sometimes finds difficult to believe.

“After all of these years, I’m still a musician at heart,” she explained. “I didn’t even like history growing up, mostly because of the way it was being taught. I found it to be boring. I certainly never planned to go into something scholarly, but the study of history is fascinating—far different from what I was exposed to in high school.”

Still, her experience on the lighted stage has served her well in the classroom. “Sure, I’ve taken a circuitous route to get here, but my time performing in front of an audience has definitely been an asset,” she said. “I don’t just get up in front of the class and lecture—I try to make a connection with students. It’s what I love about this job.”