Rev. Stephen Rooney ’17C’s mother hoped for one of two things for her children: either marry a good Catholic man or woman or join the religious life. After much discernment, which included four years of undergraduate studies at St. John’s University, Fr. Rooney opted for the priesthood—a choice he has never regretted. 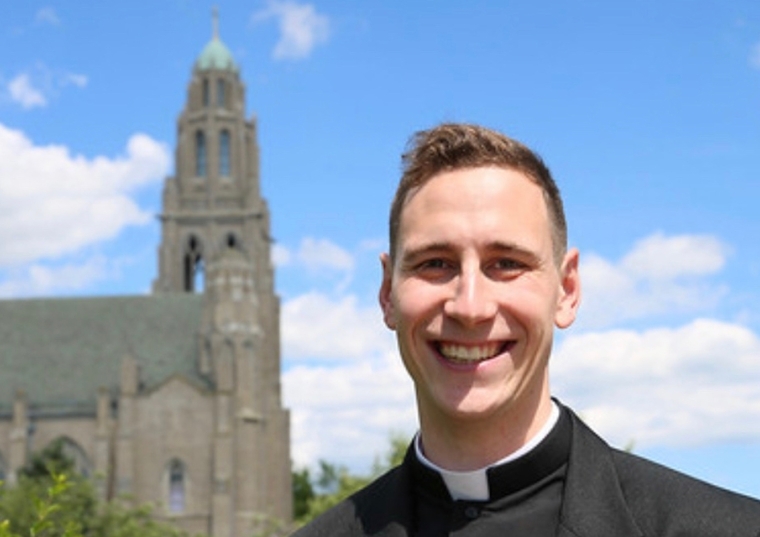 Rev. Stephen Rooney ’17C’s mother hoped for one of two things for her children: either marry a good Catholic man or woman or join the religious life.

“Those were the options,” he said, smiling. After much discernment, which included four years of undergraduate studies at St. John’s University, Fr. Rooney opted for the priesthood—a choice he has never regretted.

This past June, Fr. Rooney, a native of Garden City, NY, was ordained a priest for the Diocese of Rockville Centre, NY, and assigned to Notre Dame Parish in New Hyde Park, NY. The fourth of five children, Fr. Rooney always felt a strong pull to religious life, first through his parents and later through priests both at his home parish of the Church of St. Joseph in Garden City, NY, and elsewhere, who mentored him along his journey.

Fr. Rooney’s father passed away when he was eight years old, and he credited his mother for accepting the burden raising five children alone with grace and faith. “The priests and deacons at St. Joseph’s were so supportive of my family after dad died,” he remarked, noting that he and his brothers were altar servers there in the ensuing years. “They really journeyed with us.”

At the same time, Fr. Rooney dated and involved himself heavily in sports, most notably football and track. He bonded with Fr. Fitzgerald, an Olympian handballer, over their love for sports. Fr. Rooney was offered a cross-country scholarship to Ave Maria University in Florida.

“By this time, the priesthood was really on my heart,” he said, and he asked Fr. Fitzgerald for guidance. “He told me to visit Ave Maria and pray. Just pray.” Fr. Rooney concluded that this pull toward priesthood was too great, and he needed to at least try it, or it would weigh on him forever.

After high school he entered the Cathedral Seminary House of Formation in Douglaston, NY, and began his studies at St. John’s. “I thought there was better than a 50 percent chance I wouldn’t make it, and if not, I would go to Ave Maria, and eventually marry and settle down. But a voice kept telling me, ‘Give it another year.’”

St. John’s reduced tuition by half for seminarians, which made it financially viable for Fr. Rooney to attend. “Their generosity allowed me to discern my vocation further,” he stressed. At St. John’s, Fr. Rooney had more experiences that strengthened his desire to become a priest. He counts Rev. Robert E. Lauder, Ph.D., Professor, Philosophy, and a priest of the Brooklyn Diocese, who taught him three times, among those who helped him expand his view of the priesthood.

On a weekly basis Fr. Rooney and fellow seminarians would bring food and clothing to the Catholic Worker St. Joseph’s House, founded by Dorothy Day and located on the Lower East Side of Manhattan. That experience, as well as participating in Midnight Runs, both through Campus Ministry and the seminary, profoundly impacted him.

“Ministering to our brothers and sisters on the street, as well as the Catholic Worker volunteers, was one of the best experiences of my life,” Fr. Rooney stressed. “And that’s a very Vincentian experience.”

During two summers, Fr. Rooney made two long distance bicycle trips: in 2014 he bicycled across the country through an organization known as Bike & Build, raising funds and awareness for affordable housing. The following year he and another seminarian biked from New York to Florida in support of vocations for an organization called Biking 4 Vocations.

After graduating from St. John’s, Fr. Rooney entered Saint Joseph’s Seminary and College in Dunwoodie, NY, and became involved with a ministry known as Lay Apostolic Ministry for the Poor (LAMP) in the Bronx. Every Saturday they set up a food truck outside St. Thomas Aquinas Church.

“It was another wonderful opportunity for fellowship with those in need,” he stressed. “You would share a meal and listen to their story. I was dressing as a priest while outside the seminary, and a lot of people wanted to pray with me or share their heart with me. This was a new feeling, and all the hesitancy I might have felt about this calling dropped away. Being present to those people really affirmed my vocation.”

Between his time at St. John’s doing Vincentian service, the Catholic Worker, and LAMP, Fr. Rooney developed a special love for the poor and a desire to minister to them.

Fr. Rooney spent his pastoral year at Church of St. Patrick in Huntington. During that time the COVID-19 pandemic struck, forcing him and the parish priests to develop new mays to minister. They conducted hundreds of house blessings as well as performed online ministry.

He spent his transitional year at Notre Dame Parish. Fr. Rooney noted it is very rare for a diocesan priest to be assigned to the same parish after ordination; he was thrilled.

Notre Dame is an extremely diverse parish which welcomes a number of different cultures as well as members of the Syro-Malabar Rite, which is in communion with the Roman Catholic Rite. Having spent his transitional year here, Fr. Rooney was able to hit the ground running after ordination.

“God gave me the grace to live the celibate life, but I need people in my life to share my heart with—and that includes my brother priests, my parishioners, and my family and friends. Having that is huge. I first need to spend time with our Lord and the Eucharist. I am first nourished by Him. I feel this need to foster community, and that’s one of my primary goals as a parish priest. I’m excited to see how God does that through me.”