From Berea, KY—via St. John’s University—like the intrepid reporter that she is, Alicia Venter ’22CCPS is ready to go wherever her career and faith take her.

The 2022 graduate of The Lesley H. and William L. Collins College of Professional Studies and former Editor-in-Chief of St. John’s student newspaper The Torch is an aspiring business journalist whose conversion to Catholicism marked her time at the University. Ms. Venter, born into an Evangelical Protestant tradition, completed the Right of Christian Initiation of Adults (R.C.I.A.) program in 2019. Sent home for a year when the University pivoted to remote instruction during the pandemic, she did not receive the Catholic sacraments of initiation until April, when she joined the 2022 cohort at St. Thomas More Church.

Becoming a Catholic was a thoughtful decision— as was her choice to attend St.  John’s, located more than 700 miles from her hometown.

“At a young age I knew I wanted to leave my home state temporarily,” Ms. Venter said. “It limits your perspective of the world to stay in one place too long. There are not many Catholics in Kentucky. Everyone is either an Evangelical or more traditional Protestant, but my parents left it up to us.”

With the help of her roommate-sponsor, Clare Duda, in October of 2018 Ms. Venter began what she thought would be a half-year’s journey toward becoming a Catholic; instead, due to the pandemic, it took four years.

“RCIA is different from the customs of other churches,” Ms. Venter said. “There is an aspect of seriousness and a level of reflection that you don’t find when you grow up in a more Evangelical culture. I really think the whole process of giving of your time helps you develop a better relationship with God.”

After graduation, she returned to Berea, about 40 miles south of Lexington, KY. Ms. Venter said she is fortunate to have a Catholic church in her community. The greatest percentage of Catholics in Kentucky live in Louisville, about 120 miles away.

Of course, she might not be in her hometown long. The 20-year-old is eager to pursue a career as a journalist and realizes, with local jobs scarce, she might have to relocate. A return to the northeast is not out of the question.

Business journalism is appealing, Ms. Venter said, because of the impact it can have on people’s lives. “People don’t really understand how the economy impacts so many,” she explained. “So many people have 401(k) plans now. As a business journalist, you can take something that is confusing but important to people and make it understandable.” 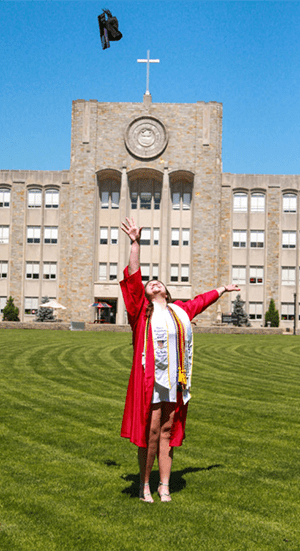 Her Journalism major at St. John’s taught her many things. While interning at QNS, a network of community newspapers in Queens, NY, she recalled what her professors taught her: journalists are on the front lines of world events.

“I always loved history and was good at writing,” Ms. Venter recalled. “Journalists are the first writers of history. The best thing the University did was force me to be a well-rounded thinker.”

Such quick thinking would prove essential when in March of 2020 the University transitioned to remote instruction to mitigate the spread of COVID-19. Unable to gather as a staff to produce a print edition, Ms. Venter and other key editors made the decision to pivot to an all-digital publication.

In truth, the staff began considering a digital transition a semester earlier. The pandemic closure left them no choice but to expedite the process, which Ms. Venter supervised. Lacking the events that traditionally filled the paper’s news section was a temporary challenge, Ms. Venter said. However, necessity made the staff better journalists.

“No one was here, and our traditional areas of coverage—events—weren’t happening,” Ms. Venter recalled. “That made finding things to cover a little different, but it also forced us to be enterprising. It forced us to work and to be more creative.”