Katrina Reese Curato ’10C has not ended up where she thought she would, but that’s fine with her/them. Reese identifies as a demi-pan person with they/them/she/her pronouns.

A native of Nanuet, NY, Reese sought to expand her horizons when it was time for college. “I wanted to get out into the real world and sought out opportunities for growth and leadership.” She applied to St. John’s University as it checked all her important boxes for college: proximity to New York City; a Study Abroad program; a large, diverse student body; safe, on-campus residence halls; and a strong Campus Ministry program rooted in service.

Of biracial heritage, Reese noted that her struggles through childhood and adolescence influenced her decision to attend St. John’s. “When I got to St. John’s, I was really impressed. I encountered a diverse array of people from all walks of life, which was exciting, and a relief all at the same time.”

Ms. Reese’s initial plan was to teach elementary school, and majored in Education. “I wanted to be the teacher I never had—supportive and kind: a role model. I loved kids.”

However, once she was exposed to life in the classroom, Reese realized teaching was not for her. “I’m better with a one-on-one situation that allows me to focus on individuals,” she stressed, adding that, at the same time, she served as a teaching assistant for inpatient teens undergoing psychiatric care, and tutored gifted children. “I had a rough childhood and wanted to make a difference,” so she pivoted to Psychology in her junior year and was accepted into the combined B.A./M.A. program.

Reese finished her undergraduate degree—and all of her master’s classes and most of her thesis—when she decided to leave the program. “I realized I needed to do more work on myself,” she recalled.

A self-described over-achiever who was involved in a wide range of campus activities, Reese felt burned out as she neared the end of her college career. “I was this high achieving person, and recognized leader on campus, but it’s a lot of pressure. I realized I couldn’t do what I wanted to, which was help people in crisis.” Reese credits the Center for Counseling and Consultation at St. John’s for helping her through a particularly difficult time.

At the time, Reese began working in a medical office as an administrative assistant and soon became its billing manager. She thought she might return to the psychology program but had to repay her student loans and needed to work full time.

Ultimately, Reese carved out a career helping people in crisis. Today, she handles comprehensive project management for a company contracted by insurance companies to inventory homes following fires, floods, and other natural disasters. “I use the skills I’ve developed to help people who are in difficult predicaments. I understand what they’re going through and help them focus. I love this job.” 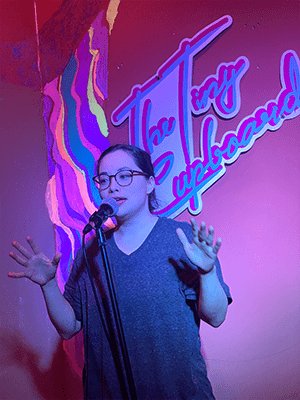 Through therapy, Reese learned a great deal about herself. “It helped me cope with everything. It gave me confidence. I’m a good communicator; I care about people on a really deep level. I’m an understanding person. I learned how to be independent and accept myself.” This also meant coming to terms with her sexuality and is a proud member of the LGBTQIA+ community.

Not believing she was destined to work in an office indefinitely, Ms. Reese decided to seek out another passion. To that end, she discovered stand-up comedy.  “There’s something about going through difficult times that makes people funny.” She describes her brand of comedy as humor of the absurd. “I like smart jokes that are layered and make people think—nothing hateful or hurtful.” Additionally, Reese has carved out a successful career as a voice-over actor for the commercial and animation industries.

Reese credits Lawrence F. Pitilli, Ph.D., Associate Professor of English and Speech in The Lesley H. and William L. Collins College of Professional Studies, as a particular influence. “Before I took his class, I couldn’t get up in front of an audience, and he made it easy for me. He is so cool and great to talk with. Now I can do improv, stand-up comedy, sketch comedy, and sing without fear.”

As for her comedy, Reese’s goal is to peel back her own layers and emphasize to people the importance of self-discovery and self-identity. “People have watched me struggle, grow, and overcome. They reach out to me fairly frequently, and they feel safe to talk to me about things. It means so much to me knowing that I am not alone in the difficulties I have experienced. Everyone is going through something, and especially in these last two years, we’ve been collectively traumatized. People’s pain should not be diminished; it should be respected.”