In recognition of Native and Indigenous Heritage Month, St. John’s University’s Office of Multicultural Affairs has organized a multicampus celebration under this year’s theme, “Health, History, and Heritage.”

Events are in-person and virtual across our Queens and Staten Island, NY, campuses. We invite you to join the community celebration of NIHM.

Join us as Dr. Sańchez utilizes the power of storytelling to discuss the health, history, and heritage of the People of the Rain. This keynote will discuss Mixtec people who are indigenous to the Puebla region of the Americas and will utilize images and storytelling to share generational stories of migration and resilience. This event is held in person, with a streaming option for virtual guests. 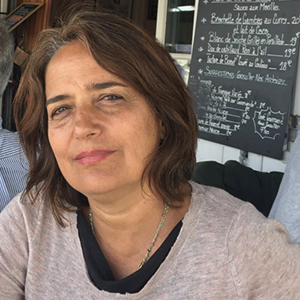 Margarita M. Sánchez earned a master’s and a Ph.D. in Spanish and Latin American Literature from Rutgers University. She is dedicated to the study of contemporary Latin American literature, with an emphasis on gender and cultural studies.

At Wagner College, she offers all levels of Spanish language, as well as classes on literary theory, short films, and 20th-century Latin American literature. She is actively involved in the Port Richmond community in Staten Island, where she works with immigrants from Central and South America.

Dr. Sánchez has written about displaced populations in Colombia, with a focus on the female experience. She is working on the manuscript of Xayacatlán: People of the Rain, a book that focuses on the testimonies of four indigenous families separated by forced migration. She is a Professor of Spanish at Wagner College.

Join us as we celebrate the start of NIHM with our featured guest performers and educators from the Redhawk Native American Arts Council. The event includes a traditional performance and education about Native and Indigenous people. This year, the council will host an interactive dreamcatcher workshop for guests. Register soon as seating and dreamcatcher kits are limited. 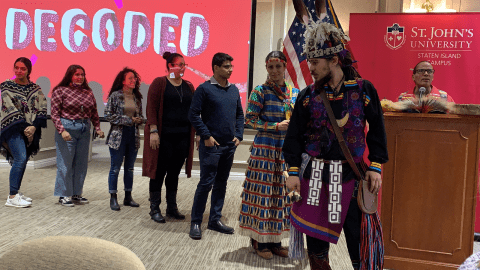 The council is a not-for-profit organization founded and maintained by Native American artists and educators residing in the New York City area. Since 1994, the council has been dedicated to educating the general public about Native American heritage through song, dance, theater, works of art, and other cultural forms of expression. The council represents artists from North, South, and Central America; the Caribbean; and Polynesian Indigenous cultures.

Join us for a night of painting with featured artist Renelle White Buffalo, who incorporates personal meaning and connections to her Native American roots through her art. You will have an opportunity to create your own canvas painting while Renelle White Buffalo discusses her art, inspiration, and Lakota heritage. 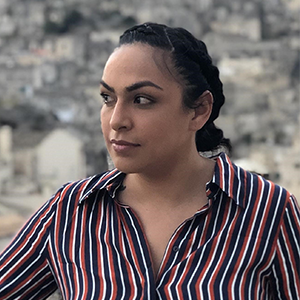 On canvas, Renelle White Buffalo transforms traditional Lakota symbolism into contemporary abstract artwork, allowing the composition to create a cross-cultural conversation. The bold and confidently layered brushstrokes of acrylic paint incorporate personal meaning and connections to her Native American roots. Her work challenges the stereotypes and redefines the perception of being indigenous today, both on and off the reservation. After growing up in South Dakota, she now currently lives and creates in the New York City area and exhibits throughout the United States.

Join us for a virtual culinary experience as we learn from chef and food historian Lois Ellen Frank, Ph.D., and chef Walter Whitewater as they discuss practices that promote healing and explore opportunities for each of us to make a difference. They will discuss and demonstrate ways in which we can decolonize and re-indigenize our food by making small but powerful changes that can promote a positive impact on both ;our health and the environment. 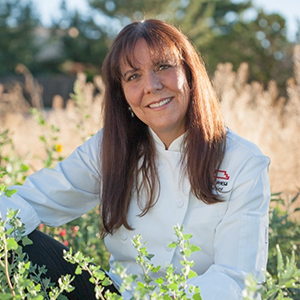 Their mission is to feed the body and nurture the soul. Dr. Frank has spent many years documenting and working with foods from Native American communities in the Southwest. Her work culminated in her James Beard Award-winning cookbook, Foods of the Southwest Indian Nations.

Together as part of the US Department of State’s Diplomatic Culinary Partnership, Dr. Frank and Mr. Whitewater traveled to Ukraine (2013), the United Kingdom (2105), and Russia (2016) to teach about the history of Native American foodways. Using food as a form of diplomacy to create dialogue and educate people on the Native American food contribution, they were happy to share with the world how these native foods have influenced many of the foods we now eat every day. The two chefs also traveled to Guam to work with the Humanities Guåhan in 2011 on the revitalization of traditional foods and foodways in that country.

Dr. Frank works with the Physicians Committee for Responsible Medicine (PCRM) on a program, “The Power to Heal Diabetes: Food for Life in Indian Country,” that uses the ancestral Native American diet for health and wellness in Native communities. For 11 years, she has been a developer and presenter of nutrition education content in partnership with the PRCM.

She is a cooking instructor at the Santa Fe School of Cooking and an Adjunct Professor at the Institute of American Indian Arts, where she teaches Native students from tribal communities all over the Americas about Indigenous concepts of Native American foods and how to prepare healthy Native American dishes for health and wellness.

Dr. Frank uses the metaphor that “food is our medicine” and the key to future health and wellness in Native communities. She has been working with The Cultural Conservancy, a Native-led organization founded in 1985 with a mission to protect and restore Indigenous cultures, as an advisor, food educator, and chef since 2005, and now serves on the Board of Directors.

In 2020, she was the recipient of the Local Hero Olla Award, which recognizes an exceptional individual for the work they do to create healthy, innovative, vibrant, and resilient local sustainable food systems in New Mexico. 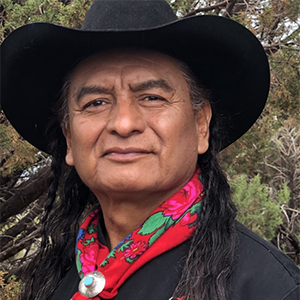 Chef Whitewater has appeared on numerous network television cooking shows featuring foods of the southwest. He released a video in November of 2018 on Native American cuisine from In Real Life by AJ+, and a video with the Flower Hill Institute on “Sharing Indigenous Foodways” in 2021.

Chef Whitewater worked on the James Beard Award-winning cookbook, Foods of the Southwest Indian Nations with Lois Ellen Frank, Ph.D. He has traveled with Dr. Frank as part of the US Department of State’s Diplomatic Culinary Partnership to Ukraine (2013), the United Kingdom (2105), and Russia (2016). The two chefs promoted indigenous foods of the Americas through the culinary arts.

Chef Whitewater was the first Native American chef to cook at the James Beard Foundation house in New York City. He won the James Lewis Award in 2008 from BCAGlobal for his work as a Native chef.