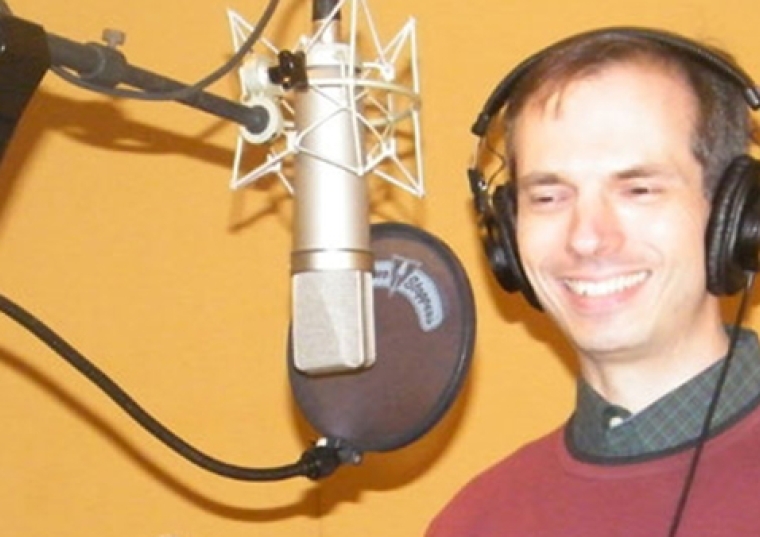 From an early age, Tony Rossi (’91SVC, ’97G) knew he wanted to be a storyteller. “I was always a sucker for a good story," he said recently, "regardless of the medium in which it was told – be it television, radio, film, books or music.”

Today, as Radio Host/Producer for  The Christophers, Tony tells inspiring stories about the famous and not-so-famous, using the media he grew up loving. The Christophers is a Catholic media organization that uses the media to showcase examples of people living out Gospel values in their everyday lives, and Tony has been on staff since 1996.

Tony was attracted to St. John’s because of its renowned Mass Communications program and the Catholic nature of the institution. He enjoyed writing, but was unsure how he would pursue a career in media.

During his first two years at St. John’s, Tony devoted nearly all his free time to caring for his grandfather, who was suffering from Parkinson’s disease. Prior to Tony’s junior year his grandfather passed away, but he wondered whether he had enough time left in school to master the equipment in the University’s state-of-the-art Television Center.

“I had gone on a tour (of the TV Center) and was intimidated by all the equipment,” he noted.

One day Tony found encouragement when he came upon a Christophers pamphlet in the back of his church following Mass. Entitled, “Failure isn’t Fatal,” it made a lasting impression. “That helped motivate me to join TV Club,” he stressed, adding that he soon signed up for his first production class and attended his first TV Club meeting.

Once there, Tony was warmly received by older members, who were encouraging and eager to teach. “It was the nature of the people there that kept me coming back. They put us to work right away.” Rather than feeling intimidated, Tony quickly familiarized himself with nearly every aspect of the TV Center. He also joined the TV Center’s crew of student workers, assisting professors with their classes.

At TV Club, Tony’s peers encouraged him to develop his own ideas, and provided him with the resources to film and edit them. He could tell stories and collaborate with others as they told theirs.

Tony continued his membership as a graduate student, remaining there until he finished his master’s degree. While he never interned, he felt that immersing himself in the TV Club experience served as an internship of sorts. “I was there pretty much every moment I wasn’t in class,” he said, stressing that he enjoyed the camaraderie and collaboration that were a hallmark of his years there.

Since finding that pamphlet in church, Tony kept The Christophers in mind as an organization he might like to work for someday. After receiving his master’s degree in English he applied, and was hired a few months later as a production assistant. Less than 18 months later, Tony found himself responsible for the all elements of producing the organization’s weekly television show.

While the television show has ceased production after a successful 55-year run, the organization has a weekly radio show, for which Tony now serves as host as well as producer. Christopher Closeup is available on Sirius XM’s “The Catholic Channel” and the Relevant Radio Network, and is also available in podcast form through The Christophers website.

Today, Tony not only oversees the radio show, but is responsible for the annual Christopher Awards ceremony, and serves as Editor-in-Chief of all their printed publications and social media.

Since becoming host, Tony has interviewed celebrities such as author Dean Koontz, actors Patricia Heaton (Everybody Loves Raymond), Gary Sinise and Jim Caviezel (who played Jesus Christ in Passion of the Christ), among others, but is quick to point out the many everyday people The Christophers have showcased. The common thread running through all these interviews is people sharing stories with a positive message.

“It’s nice to see how many people are willing to discuss their faith. They’re not pushing it down people’s throats. It’s an integral part of their lives, and often got them through some very difficult times, and has the potential to help others.” He added, “There’s a lot more goodness and good people in the world than reading the news would lead you to believe.”

Tony stressed that he’s pleased to have found a career that integrates his strong faith with his love of storytelling. “If I had my way, I would continue doing what I do in some form for the rest of my life. We’re sharing good stories about good people. We’re sharing insights that don’t always get play in the mainstream media.”

He added that speaking to these people has helped strengthen his own faith, and sees a definite connection to that moment over 20 years ago when he came upon the Christophers pamphlet.

He also remains heavily active in alumni circles and close to the friends he made in TV Club.  “People say they’ll stay in touch after college but often never do. This group has stayed together. Everybody has different personalities and interests, but we spent all that time together in a close knit area working together toward a common goal. The friendships I made in college are the strongest I have.”