Mr. Mitsopoulos, 79, is a champion powerlifter in his age group, who pressed 235 pounds at the World National Powerlifting Championships in Bordentown, NJ, in November. He is also a professional magician who has delighted audiences with his sleight of hand for more than five decades. 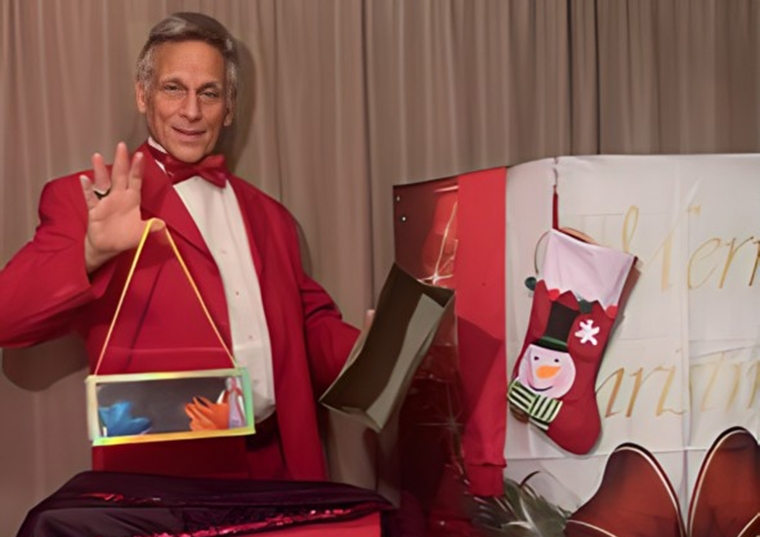 There is no magic in staying fit into your 80s, says John Mitsopoulos ’69Ed.

The St. John’s University alumnus is among the nation’s best in his age group in two unrelated disciplines. Discipline, he said, is the key to success in both.

“I’m single, that’s why I can do all this stuff,” Mr. Mitsopoulos joked, before adding that in both powerlifting and magic, “you have to be consistent in your training. You can’t just go to the gym once or twice a week and compete. I always look to improve and change as a magician.”

These days a resident of Fort Myers, FL, Mr. Mitsopoulos was a math teacher in New Jersey for more than 30 years. He attended St. John’s on a track and field scholarship, and, in 2001 at age 56, set the world powerlifting record for his age group with a 402.5-pound bench press.

Mr. Mitsopoulos turns 80 in February and plans to continue competing in the bench press despite shoulder and hip replacement surgeries that required extensive rehabilitation.

“Lifting is in my blood, I guess,” Mr. Mitsopoulos said. “I love competing and got good at it very quickly. I weighed 145 pounds in college when I started lifting. Before I knew it, I was benching 300 pounds.”

Introduced to the sport of powerlifting more than three decades ago at the urging of the sports director of the Hunterdon County YMCA in Flemington, NJ, Mr. Mitsopoulos was a reluctant competitor at first. But in his first event, he defeated the national runner-up in his age group.

He since has set state, national, and world age-group records in powerlifting associations in the United States, Canada, and Puerto Rico. In 1995, he was featured in Sports Illustrated’s “Faces in the Crowd” section when he set a world record in the 50–54 age group.

Raised in a family of modest means in the Bronx and Queens, Mr. Mitsopoulos walked on to the track team at St. John’s, earning a scholarship from legendary coach Steve Bartold when he completed a quarter-mile run in personal-record time.

“You could say I pulled a rabbit out of my hat with that,” Mr. Mitsopoulos joked. “But I fell into things. It was fortunate because if I did not get a scholarship from St. John’s, I would not have been able to go to college at all. I ended up getting a great education.”

Mr. Mitsopoulos competed in the quarter-mile and half-mile at St. John’s while majoring in math. He went on to earn a master’s degree from Clemson University, paying for it with a stipend he earned as an assistant track coach.

While he was pushed into powerlifting, Mr. Mitsopoulos needed no prodding to embrace the art of magic tricks. Fascinated by magicians since childhood, he studied their tricks in books and at conventions. Eventually he became skilled enough, and in 1975 Constantine Magic was born.

“When I was 10 years old, I watched The Ed Sullivan Show on television,” he said. “I was immediately fascinated by magicians. I would wonder ‘How do they do that?’”

At one point in his 40s, Mr. Mitsopoulos was teaching math full time, coaching high school track, performing in magic shows, and even working part-time in retail to supplement his income. “When I bought my first house, mortgage interest rates were 16 percent,” Mr. Mitsopoulos recalled. “You could not afford that on a teacher’s salary, so I had to do all these things to make more money. I could not do it now.”

A member of the International Brotherhood of Magicians and the Society of American Magicians, Mr. Mitsopoulos would often integrate magic tricks into his math lessons. He taught and coached at St. Joseph High School in Metuchen, NJ, and later at Hillsborough High School in New Jersey, where he started a magic club that long before Harry Potter introduced hundreds of students to the art of wizardry.

He still performs today at conventions, birthday and holiday parties, fundraisers, and church and school events. He recently launched a new act set to the music of his childhood—’50s rock.

“I call the show ‘Abracadabra-Doo-Wop.’ I do tricks with Hula-Hoops, bubble gum, and records,” Mr. Mitsopoulos said. “I always try to be innovative.”