St. John’s Alumnus Inspires Others through His Smile and Strength

A diving accident took from Casey Ellin ’09CCPS, ’12MPS the use of his legs. What it could not touch was the size of his heart nor the magnitude of his spirit.

A spry 26-year-old athlete from Brentwood, NY, Mr. Ellin fractured three cervical vertebrae in June of 2013 after diving into shallow water at Jones Beach State Park in Wantagh, NY, and has been in a wheelchair since. With the assistance of several St. John’s University friends and a dedicated team of doctors and physical therapists, the former Coordinator of Intramural Sports at the University has regained use of the bicep muscles in his arms and some use of his shoulders and triceps.

But the muscles he loves to flex these days are in his face, as he can usually be seen with a broad and infectious smile that few can match.

“I knew Casey was one of the strongest people I had ever met,” added Quinn Evans ’10TCB, a friend from Mr. Ellin’s college days who now lives near San Francisco, CA. “What I didn’t know was the depth of his character. He was, and is, the best of St. John’s in my eyes.”

He needed multiple essential surgeries to survive and spent 45 days in an intensive care unit, and then another 13 weeks in a New Jersey rehabilitation facility. His survival was considered miraculous, but it brought with it years of physical and psychological therapy, self-doubt, and a cascading series of medical bills, made tolerable only by the support of his St. John’s friends who never forgot the Johnny with the ability “to smile through anything,” as Mr. Evans recalled.

To help Mr. Ellin, four of his fellow Johnnies—Mr. Evans, his wife Ariane Evans ’12C, Kevin Thompson ’09CCPS, and Mr. Ellin’s sister, Bridget Nieves ’07C—along with his home health aide, Rachel Weltmann, organized the fundraiser Roll and Run at Jones Beach on September 18. The half-marathon distance of 13.1 miles represented the precise distance he traveled en route to the hospital after his accident. It was planned for September to coincide with Spinal Cord Injury Awareness Month, and the group hopes to make it an annual fundraiser. 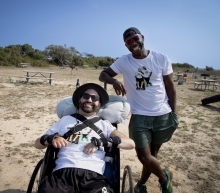 While running themselves, the St. John’s quartet took turns pushing Mr. Ellin, who rode in a custom-designed bike. The goal of the event, and all the group’s fundraising efforts, is to generate enough revenue for him to find a handicapped-accessible house, increasing his independence. Ms. Weltmann estimates the cost of a new home at $500,000; he currently lives with his father in Glen Cove, NY. A GoFundMe page has been established for those who would like to contribute.

“I still struggle with, ‘Why me?’” Mr. Ellin admitted. “I suppose I will always struggle with it. But you cannot let that question take over you, because then you will become a miserable person and you will still be disabled. I try to stay enthusiastic about life.”

It is precisely that attitude that endeared him to Ms. Weltmann, who has been Mr. Ellin’s personal care worker since 2020. In addition to helping him navigate his home, she assists in meal preparation, bathroom functions, and medication administration. She recently earned a doctorate degree in physical therapy at the New York Institute of Technology—inspired by Mr. Ellin.

“Casey has changed my life. He is a very special person,” Ms. Weltmann said. “He has taught me so much, including the importance of taking note of the things in life we take for granted, because some of those are things Casey, tragically, can’t do.”

Inspiring others is nothing new to Mr. Ellin, who during his time at St. John’s served as a Resident Assistant and Orientation Leader. After he graduated, he assumed his position as Coordinator of Intramural Sports in August of 2009, where he managed more than 40 people.

Mr. Ellin earned a master’s degree in Sport Management in 2012. In February 2013, he left St. John’s to become Assistant Director of Intramurals and Sports Clubs at Stony Brook University.

The accident happened less than half a year later. Diving into shallow water, Mr. Ellin hit his head on what he thinks was a sandbar. “My body kind of went numb,” he recalled.

Mr. Ellin’s friends all rallied around him, providing emotional support as he endured grueling physical therapy sessions. “I focus on physical therapy as I used to look at practice when I was an athlete,” he said. “I just try to get the most out of every session.”

With physical therapy reduced now to once a week, these days he has time to take in sporting events, engage with his friends, and even surf. Mr. Ellin went back into the ocean beginning in 2016 with the help of the rehabilitative service Empower Spinal Cord Injury.

Of course, St. John’s remains the place that formed Mr. Ellin and created the bond that exists among all four of his friends. They have been witnesses to all he has accomplished since the accident and know more exists within him.

“St. John’s is the village we were all ‘certified’ at,” said Mr. Thompson, a television host and emcee. “So, of course, we had to hang together to do this. There were so many other people in our class that have been super.”

“Casey has stood up at the plate and inspired so many people,” Mr. Thompson continued. “He is such a light in the world.”