“Embrace uncertainty. The road is not always easy. Never giving up, and staying focused on goals, is how you get through life’s challenges. Absorb the life lessons that St. John’s offers and always be ready to serve.”

Sometimes events in life, both consequential and less so, serve to foreshadow the future. For Gina Harrow ’03TCB, it was the horrific events of September 11, 2001, when al-Qaeda terrorists attacked the United States and America’s longest war began in response.

Looking back two decades later, it is one of the darkest days in US history and the singular day that she cites to begin her story—a story of how global events would hit her hometown, impact her marriage and family, and ultimately serve to strengthen her resolve to serve others in need.

Sitting in her Florida home with the family dog curled up in her lap, Gina, in a plain white T-shirt and wearing her blonde hair casually pulled back, looks very much the part of the self-professed busy soccer mom that she is, balancing work, family life, and an inner determination to “get things done.” Momentarily pausing, she begins to reflect on the past and future, describing a life lived in service to her family and her ever-growing extended military family.

Today, Gina serves as Executive Director of the Yellow Ribbon Fund, Inc., a nonprofit veteran service organization that provides housing, transportation, and caregiver and family support to severely wounded, ill, and injured post-9/11 service members from every branch of the United States military following unexpected medical crises. More than a job, her vocation to serve military families is born of the personal experience that she and her husband, US Army Capt. Ben Harrow (Ret.), endured after Ben, while leading a team of Green Berets on an antiterrorism mission, stepped on an improvised explosive device (IED) and was seriously wounded.

Recalling how on September 11 she watched history unfold as an undergraduate student studying finance at The Peter J. Tobin College of Business, Gina shares, “I was in class at the Queens, NY, campus, and our professor dismissed us for the day. It was a chaotic time. As a New Yorker, it hit home and it hit hard.”

Gina, a native of Great Neck, NY, was studying at St. John’s after transferring from the University of Connecticut. By the time she got to St. John’s, she was helping to finance her education by working full time and carrying a robust course load; there was not much time for extracurricular activities.

“I was always working. I was a commuter student, studying and working,” she explained. “I wanted to get my degree and get out into the world, and St. John’s enabled me to do that.”

Upon graduation in 2003, Gina continued to work full time in finance and accounting, and eventually joined American Express, climbing the corporate ranks and developing her professional career. While at American Express, she married her childhood sweetheart. Gina and Ben attended rival high schools in Great Neck and even dated as teens before getting reacquainted after college.

Ben graduated from the United States Military Academy at West Point in 2005. At West Point, he was a student-athlete, distinguishing himself on the lacrosse team as a short stick midfielder while earning the Unsung Hero award his senior year. Ben had already completed one deployment to Iraq by the time he and Gina were married in 2008.

At first, life as a military spouse did not seem to interrupt Gina’s career path. She transferred to an American Express office in Greensboro, NC, and she drove 180 round-trip miles daily from Fort Bragg.

“Being a commuter at St. John’s prepared me for that,” she said.

A young professional, she enjoyed learning the back end of business and operations and excelled at learning new things and implementing corporate procedures.

For the newlyweds, life revolved around work and Ben’s military career. Ben left for his second military deployment overseas, and the very next day the young couple learned they were expecting their first child. He was able to get home to be present for the birth of their son, Peyton.

With a husband spending extended periods of time fighting in an overseas war, Gina embraced her career and being a new mom. She was able to communicate with her husband somewhat regularly and counted the days and prayed for his safe return home.

In another example of prescient foreshadowing, Gina shares, “At the time, I wasn’t a very involved military wife. I worked and took care of our son; I did not get involved in programs for service members or their families. I relied on my own big Italian family, especially my ever-supportive parents.”

Life dramatically changed when, in mid-May 2012, Gina received the phone call that every military spouse fears. Five months into his third deployment, Ben, while working a routine mission with Afghan security, walked into a doorway, took a step, and felt the brunt of the biggest blow he had ever experienced. Ben had stepped on a 10-pound pressure-plate IED and was blown several feet in the air, maiming both of his legs above the knee, two fingers, and a portion of his right forearm in the blast.

“Sorry, Gina,” were the words that went through Ben’s mind immediately following the devastating explosion.

Life would never be the same for the young couple, but as a testament to the power of their mutual love and shared determination—and with the help of an extended family—they survived.

Ben was transferred to Walter Reed National Military Medical Center in Bethesda, MD, and Gina spent the next six months in the hospital as doctors fought to save his life. She slept by his side in a chair and would keep track of doctors, nurses, and everyone that passed through his door. She immediately became a patient advocate, using her business acumen and unwavering devotion to her family.

Ben fought four bacterial and two fungal infections, which kept infecting healthy tissue. He summoned every ounce of mental and physical strength necessary to defy medical expectations and be released from the hospital two months earlier than projected.

Ben underwent experimental treatment to extend the bone in his femur to hold a prosthetic in place. He was able to make enough of a recovery to return home after more than 75 surgeries.

Family, faith, and friends created a much-needed support system for Gina and Ben as they navigated new challenges.

“I have a big family and great friends,” she said. “We were overwhelmed by love and support.”

In a moment, the life they had was taken away from them, but they gradually worked to adjust and rebuild, to survive, and to slowly thrive.

Organizations like the Tunnel to Towers Foundation helped with a home designed to address their unique needs so they could reclaim their day-to-day independence.

“Both of us are New Yorkers. We don’t quit!” Gina emphatically declared.

When talking to Gina, she uses the term “we” exclusively. Every reference to her family, important decisions, and shared experiences are seen through the mutual lens of Ben—her teammate, soulmate, and husband.

It was not always easy. Gina describes the pain she witnessed as military families often struggled to navigate a complicated and at times bureaucratic system. Marriages are tested and the pain lingers even as physical wounds heal. The needs of military families are complex and ongoing, and supportive services are essential. Critical needs such as transportation to a medical appointment or securing childcare and housing are often a protracted struggle.

Once Ben was settled at home, Gina gradually wanted to return to work and an opportunity with the Yellow Ribbon Fund became available.

Founded in 2005, the Yellow Ribbon Fund works to keep families together during the recovery process for wounded, ill, and injured service members. They do this by providing housing and transportation during recovery and by giving caregiver support when and where it is needed.

Gina is responsible for the nonprofit’s programming and operations, having previously served as the Deputy Executive Director. Before that, she served as Keystone Program Director, creating the program’s infrastructure of transitional services and training, such as health and wellness education and opportunities, family retreats, and peer-to-peer support, provided to caregivers in five regional locations.

It was the overwhelming support she received that turned her energy outward when she witnessed the gauntlet of issues that military families often face.

“Military families and caregivers need support, and I want to help the same people whom I watched struggle,” she said. “I work to be an advocate and empower our recipients to work through the difficult moments of their journey and find comfort in the community.”

Yellow Ribbon’s mission is to help fill in the gaps and help families stay together, according to Gina. “A solid family foundation means they can build new lives, find independence, and create a new normal,” she said. “Yellow Ribbon is that extra helping hand.”

It is a role that she was made for, according to Vito A. Pampalona, Chairman of the Board of the Yellow Ribbon Fund.

“Gina’s work ethic and dedication to this very special cause are unwavering. She has taken the Yellow Ribbon Fund to a new level in the nonprofit world and her efforts have changed and also saved lives. And besides accomplishing all of this, she also finds the time to be a great mother and dedicated wife to her severely wounded husband. I am proud to know and work with Gina as she is an inspiration to all.”

Today, the Harrow family is busy. Ben works for a company that handles private aviation aircraft management and coaches soccer. 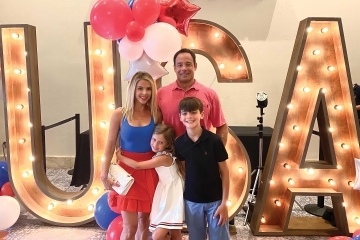 “Our lives revolve around our children,” Gina explained. “Peyton and his younger sister, Marchesa, keep us going— and going at full speed.”

Reflecting on the two decades of living since graduating from St. John’s, Gina comes back to the ideals of family. “It’s all about family. St. John’s is a family. The military is a family. We are all a family.”

When asked to give advice to current students, Gina shares: “Embrace uncertainty. The road is not always easy. Never giving up, and staying focused on goals, is how you get through life’s challenges. Absorb the life lessons that St. John’s offers and always be ready to serve.”