In basketball, a rebound is a statistic awarded to a player who retrieves the ball after a missed field goal or free throw. Timing, anticipation, and energy are key to its success. Making the effort to recover after every missed shot is essential, especially when players are tired; successful rebounders demonstrate a willingness to give it their all to get that board. 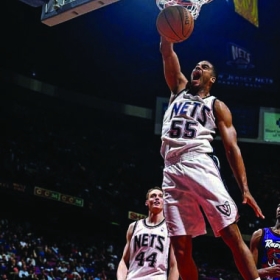 Life is very much like basketball—and so is the journey to personal recovery. No one knows that better than Jayson Williams, the former St. John’s University Men’s Basketball star and retired professional basketball player. He was a National Basketball Association All-Star who played for 11 seasons, primarily with the New Jersey Nets (now the Brooklyn Nets), before suffering a career-ending injury and struggling with addiction and incarceration.

Through highs and lows—and with a personal life story that rivals any Hollywood movie—Mr. Williams is not defined by life’s misses. Instead, he rebounds. As founder of REBOUND, an outdoor adventure substance abuse therapy program, he helps others to find recovery in their own lives.

REBOUND was born of his personal experience. During rehab, Mr. Williams felt that there was something missing from the process: regular physical and adventure activity. The program he helped develop incorporates outdoor activities like skydiving, paddleboarding, snorkeling, scuba diving, and fishing, along with field trips, into its therapy.

“There is nothing like building trust with someone by throwing them out of an airplane,” he shares with a deep belly laugh. Pivoting from life’s laughs to losses is part of any conversation you share with him.

When talking to Jayson Williams, you immediately learn three things: He absolutely loves St. John’s University. He brings positive energy to everything that he does and wants to share that positivity. His mission in life—to help others at their lowest points—is the very definition of what it means to be Vincentian.

Sitting for a Zoom interview in his Wellington, FL, office, Mr. Williams lights up the screen from start to finish. Decked out in St. John’s Athletics apparel that overlays his REBOUND branded T-shirt, he immediately starts talking—more like gushing—about the impact of St. John’s University on his life.

In a wide-ranging interview exploring the varied triumphs and tragedies of his own life, Mr. Williams modestly name-drops sport stars and celebrities—but the very first name mentioned is Lou Carnesecca ’50C, ’60GEd, ’00HON, a Naismith Memorial Basketball Hall of Fame inductee and the winningest coach in the history of St. John's men's basketball.

“Everything begins and ends with Coach Carnesecca.”

It was Coach Carnesecca and his assistants Brian Mahoney and Ron Rutledge who first tried to harness the unbridled energy of the former high school basketball star at Christ the King High School in Middle Village, Queens. Mr. Williams arrived at St. John’s as a standout player on the basketball court, who was sadly exposed to serious trauma off the hardwood.

Raped by an uncle at the age of seven, he was plied with alcohol before being victimized. It would mark the first time Mr. Williams had a drink. When he was 12 years old, he walked into his house to find his sister Linda stabbed, her bloodied face shattered by a hammer. Sitting next to her was her two-year-old son.

For years, Mr. Williams tortured himself for not being home to protect his sister from her attacker, a local from the neighborhood. His sister survived but later contracted the HIV virus from a blood transfusion; she died from AIDS two years later. During that time, she became addicted to drugs and shared her needles with her sister, Laura, who also became HIV positive. Laura died of AIDS in 1988.

As an undergraduate at St. John’s, Mr. Williams helped raise Linda’s two children. This meant taking them to and from their school, as well as to his basketball practices on the Queens, NY, campus, and home again. This created a routine, commitment, and schedule—life lessons that Mr. Williams now utilizes regularly in his daily work at REBOUND.

He was a standout performer at St. John’s, playing three seasons under Coach Carnesecca. The All-BIG EAST selection helped lead St. John’s to a 61–35 record and a pair of National Collegiate Athletic Association tournament appearances. Mr. Williams averaged 19.5 points and 7.5 rebounds during the 1988–89 season, helping the team to a National Invitation Tournament championship, where he was named the tournament’s most valuable player. He finished his career in Queens with 1,072 points and 490 rebounds.

“I learned about being part of a team and a family from Coach Carnesecca, and when I return to campus it is like going home,” he said. “I don’t get that feeling anywhere else but at St. John’s.”

As an undergraduate, Mr. Williams befriended Nicholas “Nick” Vendikos ’91SVC, Senior Director of Athletic Development. “Jayson and I went to St. John’s together. I covered him for St. John’s Today, the official campus newspaper at the time,” Mr. Vendikos said. “No matter what he has been through, he always has time for someone else and for alma mater. He dedicates his life to helping others and has always done so.”

A leg injury sustained after a collision with a teammate ended Mr. Williams’ professional career abruptly on April 1, 1999. A career in broadcasting that showcased his natural communication skills followed.

In 2002, Mr. Williams was showing off his gun collection at his home when one accidentally discharged, killing a limousine driver. He was acquitted of the more serious charges, but found guilty of trying to cover up the crime. Eventually he served time in prison for aggravated assault and additional time for driving while intoxicated. His personal struggles would continue for the next decade, until, while drinking alone one winter evening in his upstate New York cabin, some friends came calling: former New York Knicks forward Charles Oakley and former New York Jets running back Curtis Martin, Pro Football Hall of Fame member. They took him directly to a rehabilitation center. He entered the facility on December 27, 2015—and has been sober ever since.

At REBOUND, Mr. Williams uses lessons learned from his basketball career and his own rehabilitation experience, where he yearned to get in a game.

“I went to rehab where people sat around telling stories,” Mr. Williams recalls. “At my insistence, we started playing basketball, volleyball, and tennis. We were able to get the owner to let us play softball in a local park. Those activities changed the culture and our team approach to recovery.”

A team approach to building trust and moving toward healing and recovery is an essential part of adventure-based therapy, Mr. Williams explained. “You get a uniform like any athlete. You are part of a team. We have coaches and teammates, and I am right there in the game with them. If we provide that option for them, then they can find recovery through that activity.”

“Every client gets one-on-one counseling sessions every day and our programs work to raise self-esteem,” he continued. “We serve entertainers, athletes, business people, and everyday people on the road to recovery.”

Accountability, empathy, and structure are recurring themes used to describe REBOUND. Teamwork and teammates are also important to Mr. Williams, who credits Mr. Martin, Mr. Oakley, and Chris Mullin, a former professional basketball player and St. John’s Men’s Basketball coach, to help him find sobriety and the strength to maintain it.

He also credits a no-nonsense nurse who questioned his personal commitment to recovery—which he embraced as a challenge by completing the required 30 days, plus one more. “Just so no one can break my record,” the ever-competitive Mr. Williams shared.

Another aspect of REBOUND is accountability. Rehab alumni keep in touch with each other through regular communication and make an effort to build and strengthen their personal connections.

Spiritual connection is also a focus. “You can’t do recovery without God,” he emphatically stated.

He attends a weekly prayer group led by Mr. Martin. Joining the prayer group are teammates, friends, and supporters of REBOUND. “This is the highlight of my week,” described Mr. Vendikos. “I always learn something new about myself. I can never repay Jayson for all he has done. He makes me a better person, friend, husband, and father. He is family to me and to so many in that prayer group.”

Surrendering to a higher power is part of the recovery process, as is restoring trust, accepting help, and finding comfort in the journey. For that, Mr. Williams often calls upon the business advice of St. John’s Board of Trustees Chair William J. Janetschek ’84CBA, ’17HON, retired Partner and Chief Financial Officer, Kohlberg Kravis Roberts & Co. L.P. He credits Mr. Janetschek with always challenging him to do better.

“Occasionally, you cross paths with someone who has a completely different background than you, but you feel an incredible connection,” said Mr. Janetschek. “That happened the day Chris Mullin introduced me to Jayson. I have heard him tell people that he was fortunate to have met up with me, but the truth is, it’s the other way around. He has taught me more than he will ever know. He looks at life with a different lens than most and if you pay attention, you learn a lot. He is still a kid at heart, and I try to be the “big brother” he never had, even though he towers over me!”

A dedication to personal improvement is at the heart of daily living. Mr. Williams begins each day at 3:30 a.m. and arrives at the gym at 4:45 a.m. He works out on his own until 6 a.m. before returning with his teammates at 7 a.m.

“I am used to long days—after all, Coach Carnesecca used to run us in practice for hours at a time!” he said.

A typical day is filled with morning outdoor activities, afternoon counseling and meetings, and regular calls, texts, and communication with not just his own sponsor, but those in his large extended family of recovery teammates.

“My real peace comes when someone turns their loved one over to my care. When you depend on me—that gives me peace.”