Joining a select team of students and scientists aboard a 134-foot-tall ship research vessel, Environmental Studies major Conner Cummings ’19C spent his summer sailing to the Phoenix Islands in the central Pacific Ocean to research the effects of climate change on the remote region of the world.

As part of “Protecting the Phoenix Islands,” an eight-week scientific research program run by Sea Education Association (SEA) Semester, Mr. Cummings and others collected samples from the marine environment to compose a picture of the state of the ocean for the benefit of the management office of the Phoenix Islands Protected Area (PIPA). Their research added to SEA's five-year data set exploring how the ocean in PIPA might be changing in this time of warming global climates and rising sea levels. SEA is an internationally recognized leader in undergraduate ocean education. 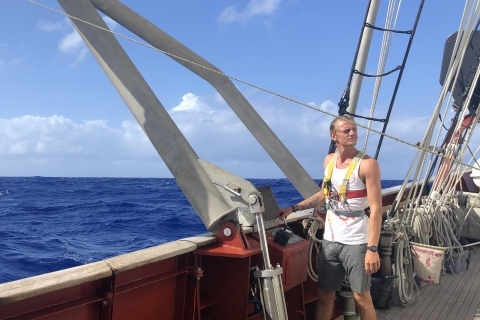 PIPA is one of Earth’s last intact oceanic coral archipelago ecosystems due to its remoteness and lack of a permanent human presence. Part of the Republic of Kiribati, it is located in an expanse of ocean approximately the size of California and is the largest—and deepest—UNESCO World Heritage site, with eight fauna-rich coral atolls.

Mr. Cummings’s trip began on June 10 at SEA Semester’s campus in Woods Hole, MA, where he and his crewmates completed preparatory course work and developed their own research projects in ocean science and conservation policy.

The class embarked on its five-week sailing voyage in Pago Pago, American Samoa, as active crewmembers and scientists aboard the SSV Robert C. Seamans, the most sophisticated oceanographic research/sailing school vessel ever built in the United States. Their journey took them 2,000 nautical miles across open ocean to the Phoenix Islands Protected Area, where they spent three weeks conducting their research.

“PIPA is one of the very few regions on Earth where scientists study an intact ecosystem and its response to climate change,” said Paul Joyce, Ph.D., SEA Dean. “We are extremely grateful to have the opportunity once again to work with the government of Kiribati and with our scientific partners to study this extremely isolated and important island nation.”