Michael A. Simons joined the St. John's faculty in 1998 and was appointed Dean of the School of Law in 2009.

Since 2001, he has been a Fellow with the Vincentian Center for Church and Society.  During 2005 and 2006, he was a member of the New York City Mayor's Advisory Committee on the Judiciary. He has also been involved with St. John's efforts to increase the diversity of the legal profession, including by organizing and hosting the annual Catholic Middle Schools Mock Trial Program, by teaching in the Ronald H. Brown Center's Summer Prep Program, and by lecturing for Legal Outreach.

A graduate of Chaminade High School in Mineola, New York, Dean Simons resides on Long Island with his wife Karen and their five children.

Sense and Sentencing: Our Imprisonment Epidemic, 25 Journal of Civil Rights and Economic Development 153 (2010)

A New Era for the Catholic Lawyer, 44 Journal of Catholic Legal Studies (2005) (with Susan J. Stabile)

A Radical Intent (Review of M. Curtis, No State Shall Abridge: The Fourteenth Amendment and the Bill of Rights), 101 Harvard Law Review 869 (1988)

Post 9/11 Race and War: A Comparative Analysis of the Wars on Poverty, Drugs and Terrorism, St. John's University School of Law (February 2003)

The Role of the Professional, Enron and Its Aftermath, St. John's University School of Law (September 2002)

Litigation Updates: Federal Rules of Evidence, Association of the Bar of the City of New York (October 2000)

Updates in the Federal Rules of Evidence, Association of the Bar of the City of New York (March 2000) 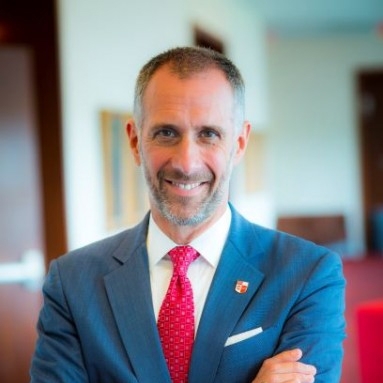