Kate Klonick joined the Law School faculty in 2018. She teaches Property, Internet Law, and a seminar on information privacy. Klonick's research centers on law and technology, using cognitive and social psychology as a framework. That has led to study in the areas of decision making, intellectual property, property, communications torts, norms, shaming, and governance. It has also led to interest in robotics, artificial intelligence, and Internet law. Most recently she has been studying and writing about private Internet platforms and how they govern online speech.

Klonick's work has appeared in The Harvard Law Review, The Georgetown Law Journal, the peer-reviewed Copyright Journal of the U.S.A., The Maryland Law Review; and is forthcoming in The Southern California Law Review and Yale Law Journal. Her research on networked technologies' effect on social norm enforcement, freedom of expression, and private governance has appeared in the New York Times, New Yorker, The Atlantic, The Guardian, Lawfare, Slate, Vox and numerous other publications.

Professor Klonick holds an A.B. with honors from Brown University where she studied both modern American History and cognitive neuroscience, a J.D. from Georgetown University Law Center where she was a Senior Editor on the Georgetown Law Journal, and a Ph.D. in Law from Yale Law School where she was also a resident fellow at the Information Society Project. She clerked for Hon. Eric N. Vitaliano of the Eastern District of New York and Hon. Richard C. Wesley of the Second Circuit. She is an affiliated fellow at the Yale Law School Information Society Project where she is spending the Fall of 2019 while on research leave to write on the topics of platform governance and oversight. 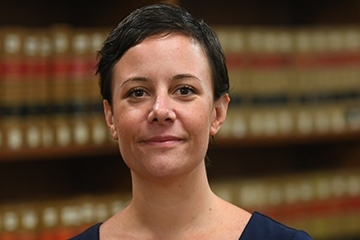