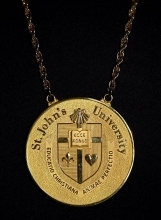 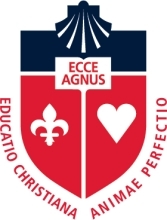 The redesigned crest restores the original blue and red, liturgical colors evoking the “Blessed Virgin and the Humanity of Her Divine Son.” The white cross at its center further identifies Christ as the foundation and model for a moral, ethical character, as does the motto Ecce Agnus (“Behold the Lamb of God”), recalling St. John the Baptist’s testimony to the divinity of Christ. The fleur-de-lis symbolizes France, homeland of St. Vincent de Paul. The heart represents his commitment to charity. The escalloped shell—an ancient symbol of the sacrament of baptism—signifies St. James the Greater, titular of the cathedral of the Diocese of Brooklyn, where the University was founded. The shell also recalls a Native American name for Long Island: “Sewanhacky” (“Island of Shells”).

Especially prominent is the banner encircling the lower half of the crest. It bears the motto “Educatio Christiana Animae Perfectio” (“Christian education perfects the soul”), a testament to the ethos that guides St. John's University.

The University Mace was created at the request of the president of the university in the early 1960s by Rev. Lawrence Lonergan, C.M., chairman of the fine arts department.

The academic mace traces its origins to the heavy, armor-breaking club knights used in the Middle Ages. In the less-militaristic climate of today’s Academy, the mace, a symbol of faculty and students, announces by its presence that those who follow bear the power of higher learning, which dispels the darkness of ignorance and oppression more certainly and peaceably than any weapon of war.

The mace bearer is the grand marshal, a faculty member chosen by the provost for distinguished service and accomplishments.

The symbols on the St. John’s University mace are all based on the iconography associated with St. John the Baptist, patron saint of the University.

The caps, gowns, and hoods worn at college and university functions date back to the Middle Ages. Monks and students of those days wore them to keep warm in the damp and drafty 12th-century castles and halls of learning.

The gown for the bachelor’s degree has a semi-stiff yoke, long pleated front, and intricate shirring across the shoulders and back. It is primarily distinguished by its long pointed sleeves.

The holder of a master’s degree wears a gown with the same yoke effect as the bachelor’s. The gown, however, is worn open, and the very long sleeve is squared and closed at the end, the forearm coming through a slit near the elbow.

The gown for the doctor’s degree is also worn open. It has broad velvet panels down the front and three velvet bars on the large, bell-like sleeves. This velvet trimming may be either black or the color distinctive of the field of learning to which the degree pertains.

The hood gives color and distinction to the academic costume. The hood—a black shell-like affair of varying size for the three degrees and material to match the gown—is silk-lined, stressing the colors of the institution conferring the degree. The hood is then bordered with velvet of the color signifying the respective fields of learning.