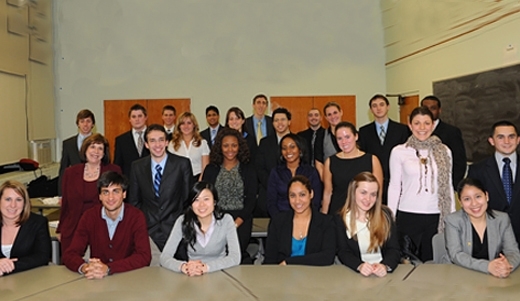 Each semester, students enrolled in the Global Microloan Program will update this site with their weekly program logs and final student presentations.

The Spring 2009 student teams include IT and Communications, Marketing and Fundraising, Accounting and Audit and Finance and Risk Assessment.

Jessiaca Lazo
Jessica Lazo, a student in the inaugural class of GLOBE, was elected by her classmates to represent the GLOBE program at the Grameen America Borrowers’ Market at St. John’s University on April 18, 2009.  Sharing the stage with Dr. Muhammad Yunus, often cited as the founder of modern microfinance and winner of the Nobel Peace Prize along with his Grameen Bank of Bangladesh, Jessica greets the audience with a speech about the impact that microfinance can have on the lives of the impoverished.  She features the exemplary work that St. John’s University’s student managers of GLOBE are engaged in throughout the developing world.

Antoni Kolev
Antoni Kolev, a student in the inaugural class of GLOBE and founding student member of the GLOBE Steering Committee, has contributed his energy and insights to the forming of St. John’s University’s innovative microloan program.  He speaks here of his passion for helping the poor help themselves and of his involvement with GLOBE.