A graduate of Columbia University, Dr. Marie-Lise Gazarian is Professor of Spanish and Latin American Literature, Director of the Graduate Program in Spanish at St. John's University, Vice President for the Northeast of Sigma Delta Pi, the National Collegiate Hispanic Honor Society, and Moderator of Epsilon Kappa, St. John's Chapter of Sigma Delta Pi. In 2001 she was awarded the Order of Don Quijote by Sigma Delta Pi. She is co-editor with Mónica Christopher-Sánchez of Entre Rascacielos, the literary journal she founded in the fall of 2001 and which is published by St. John's University. The journal, which stands as a stepping board for young writers, is designed by Katerina Damskiy, an alumna of St. John’s. Dr. Gazarian has been instrumental in establishing the Gabriela Mistral Scholarship /Beca Gabriela Mistral at St. John's University, as part of the Graduate Program in Spanish. She was appointed Representative of the Fundación Premio Nobel Gabriela Mistral in New York and Cultural Ambassador of Ecuador in the United States.

Dr. Gazarian has had a long-standing experience in the promotion of Hispanic culture in the United States, for which she received the Al Mérito Cultural award from the Government of Spain, in 1981, and a Citation of Honor from the Honorable Claire Shulman, President of the Borough of Queens, in 1991 and 2000. She was awarded a Certificate of Special Recognition from the United States Congress in 1997 and a Certificate of Congressional Recognition from the Government of Ecuador in 2000. She was the recipient of the prestigious St. Vincent de Paul Teacher-Scholar Award for the year 2002 for her “continued excellence in teaching and scholarship.” In April 2003, she was awarded the Order of Alfonso X el Sabio by the King of Spain, one of the highest recognitions granted by the Spanish Government. In April 2004, she received from the Government of Chile the Order of Merit “Gabriela Mistral,” named after the Chilean poet, a decoration granted to literary figures, artists and scholars.

In May 2018, Dr. Gazarian served as Grand Marshal at St. John’s Undergraduate Graduation Ceremony. On September 28, 2018, she received the Lifetime Achievement Award for Excellence in Education from the Ministry of Culture of Ecuador and The Life Path to Educational Excellence

Recognition from the Fundación FIDAL. This award is given each year to exceptional teachers and professionals from Latin America, Spain and the United States. On October 2nd 2018, she was made Honorary Professor by the Universidad Técnica Particular de Loja (UTPL), Ecuador. On December 13, she served as a member of the Jury for the Premio Mundial Fernando Rielo de Poesía Mística, held at the Instituto Cervantes in Manhattan.

She has been a member of the Administrative Committee of the Poet Laureate of the Borough of Queens since 1996, when the position of Poet Laureate was first created. She is a member of the PEN American Center, an association of writers working to advance literature, defend free expression and foster international literary fellowship. In particular, she is involved in the Committee promoting writing by prisoners. Every year, the PEN Prison Writing Program recognizes the work of writers imprisoned throughout the country.

Dr. Gerardo Piña-Rosales, Director of the North American Academy of the Spanish Language and Honorary President of Sigma Delta Pi, wrote in 2012, in the tenth anniversary of the journal: "To publish a literary journal during these hard times is a true undertaking. To publish it for ten consecutive years, quite an accomplishment. To publish it in an American university, an illusion. To publish it with works written by students, a utopia. But Dr. Marie-Lise Gazarian, who is never undaunted, has accomplished such task."

Dr. Gazarian has taken part in numerous symposia, including at UNESCO in Paris, the Ateneo and the Biblioteca Nacional in Madrid, the Chilean Embassy in Moscow, the Universidad de Chile and the Biblioteca Nacional of Chile, the Casa de la Cultura in Quito, the Casa de la Cultura in Lima, the Instituto Cervantes in Madrid, Paris, and New York. She has organized, as well, many symposia on Campus. Among them, Encounter with Women Writers; The Generation of 98; Beyond 92, with the participation of José Luis Sampedro, José Donoso, and John Wideman; Gabriela Mistral, from the Valley of Elqui to New York, a two–day conference, co-sponsored with Americas Society. In October 2016, she organized (October12-14) the three-day International Conference on Literature which brought to St. John’s University over 150 participants, speaking in French, Spanish, English, Italian, and Portuguese. She plans to organize in 2019/2020, with the participations of other chapters, a symposium on “Man’s Best Friend throughout the Ages.” Members of the Honor Society have played an active part in the organizations of such events.

Fred and Molly and Other Stories by Pierre Gazarian, Edited by Marie-Lise Gazarian, 2018, 152 pages.

She is also the founder and co-editor of Entre Rascacielos, a journal of creative writing published by St. John’s University.

Dr. Gazarian is a specialist in the works of Gabriela Mistral, Camilo José Cela, Carmen Conde, Ana María Matute, Elena Poniatowska, Fernando Rielo, and Fernando Arrabal. An expert in the art of the interview, she has interviewed some of the most famous writers from both Spain and Latin America on CBS, ABC and Channel 47. She has also published interviews in books and literary journals. She teaches the following courses: Spanish 109 (Spanish Stylistic: Workshop in Creative Writing); Spanish 118 (Contemporary Spanish America); Spanish 237 (Spanish-American Modernism); Spanish 238 (Spanish Women Writers from Spain); Spanish 239 (Women Writers of Spanish America); Spanish 248 (Indian Themes in Spanish-American Literature); Spanish 250 (The Spanish-American Novel from the 1950s Onward); Spanish 305 (Seminar on Hispanic Literature); Spanish 317 (Gabriela Mistral, the Poet and the Prose Writer); Spanish 323 (Nobel Prize Writers from the Hispanic World); and Spanish 315 Translation and Interpretation 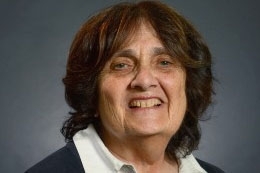