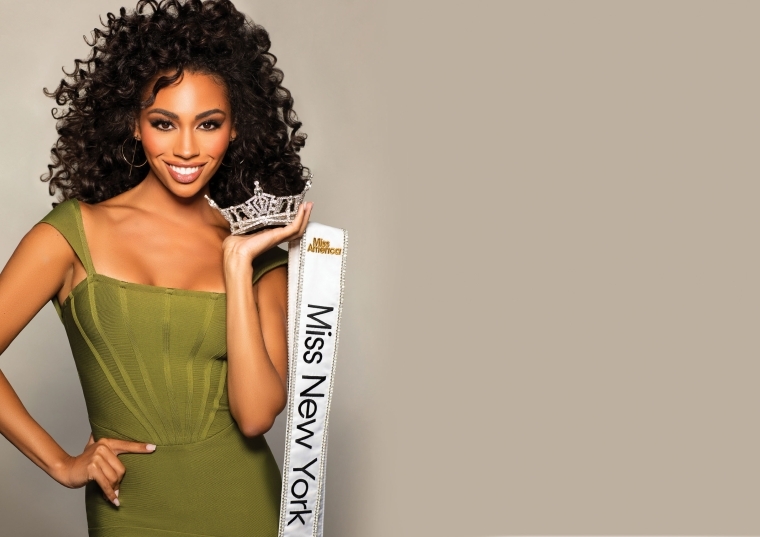 As Miss New York, Taryn is required to advocate on a social impact initiative of her choice; she welcomed the opportunity to further advance efforts she began in high school to assist the homeless. While a student at St. John’s, Taryn created Supporting Our Shelters (SOS), which educates the community about the importance of shelters. So far she has raised thousands of dollars on behalf of the homeless.

She will compete in the Miss America Scholarship Competition in December. “It all ties together really beautifully,” she explained. “Service is a key point of participating in Miss America. You have to have a plan for how you’re going to serve in a really large way.”

Taryn only applied to St. John’s. A transfer student, she told her parents she was going if accepted—despite never having visited New York. “I felt like I was called to go to St. John’s because of the strong service aspect. I always knew that I was meant to live in New York,” she stressed.

While at St. John’s, Taryn hosted the show SJWho through WRED-TV, where she highlighted servant leaders within the St. John’s community. “That really introduced me to how much I wanted to start using the media and communication to further a positive service narrative throughout the world.”

A staunch advocate for the homeless and the importance of homeless shelters, Taryn immediately identified with the Vincentian mission of St. John’s. “I felt like I was called to go to St. John’s because of the strong service aspect.”

Basilio G. Monteiro, Ph.D., Associate Professor, Mass Communication, in The Lesley H. and William L. Collins College of Professional Studies, whom Taryn, a Communication Studies major, noted as a particularly positive influence, recommended she apply to the accelerated, five-year master’s program in International Communication. “He’s been a valued advocate and help to me.”

“One of the most important things about going to St. John’s was how much I was able to expand on and focus on service,” Taryn stressed. “My service experience centered on poverty, and Americans experiencing poverty. I was able to gear myself toward human rights and pair myself with my first network of shelters while at St. John’s.”

As a young child, Taryn experienced housing insecurity; were it not for a family friend, her family would have found themselves homeless. She believes that if everyone in the country had the opportunity to serve a meal at a shelter, “they would recognize themselves in the people they serve.”

“They would see their mom, their dad,” she continued. “We’re all human, and I think people forget that it could be you or a family member. I try to treat people with the same love and affection I would want people to treat my family with. Community to me is family. Serving has reminded me that we are all connected.”

Taryn emphasized that while at St. John’s she learned to help herself. “The reason I had the experience I did was that I came as a transfer student and had experienced life already. If you want something, no one is coming to give it to you. You have to be a self-starter and knock on every door until someone opens. I heard ‘no’ so many more times than I heard ‘yes.’ I really wanted these things, and at St. John’s I learned how to get them. You have to let go of your pride and be prepared to fail. If you’re prepared to fail, you will do well.”

She added, “The professors really want you to succeed. I worked full time, and they were flexible and understanding. They didn’t give me passes or an easy out. They just gave me the tools. I would not be who I am today without St. John’s.”

During her time studying abroad at the University’s Paris, France, location, Taryn interned at France-Amériques, an initiative that promotes the bonds of friendship between France and the US. “Working in diplomacy showed me how I really sought to live a public life campaigning for others,” she recalled. “St. John’s literally changed the trajectory of my entire life. An education can change the way you think and the way you show up in the world.”

Growing up, Taryn said she never envisioned participating in a pageant, but during a high school talent show a teacher suggested she compete one day for Miss America. She competed for Miss Seattle, and at the time she was trying to involve herself in the discussion of homelessness. After winning the competition, she found it easier to gain access to higher-level service and advocacy opportunities. “After that I caught the bug.”

Taryn competed in the Miss New York Competition and was first runner up. Then she aged out of the competition. The rules were subsequently changed and the age limit increased. She competed one more time—and won in May. “If you’re not seeking pageantry as a vehicle to elevate yourself as a career woman, then you’re going to be disappointed.”

“I see it as a platform to amplify the voices of others—and it has really worked.” Taryn has met with representatives in Congress, as well as shelter directors, acting as a conduit between these constituencies to improve communication and hopefully make progress.

Initially, Taryn intended to enter the arena of diplomacy, but since being crowned Miss New York she has seen the power of media to make citizen diplomats out of regular people. “If I could have my own show or be a correspondent for a show like Good Morning America, it would be a dream come true.”

She added, “My ultimate goal in life is to help other people feel that they have the power within them to do great things just as they are. If I can do that, I will feel like I’ve been successful.”