When Stacie N.C. Grant ’92C was ready to launch her election bid for the top job at Zeta Phi Beta Sorority, Inc., she had no doubt about where she would announce her candidacy.

“I chose the Queens, NY, campus of my beloved St. John’s University. I was surrounded that day by those at the University and others who have contributed to the leader that I have become,” said Ms. Grant, who on July 24 was installed as the 26th International President and Chief Executive Officer (CEO) of the sorority, which was founded in 1920 at Howard University in Washington, DC.

In her current role at Zeta Phi Beta, Ms. Grant leads a membership of more than 130,000 college-educated, professional women who are dedicated to transforming communities through their volunteer efforts. Zeta chapters and auxiliaries have given numerous hours of voluntary service to educate the public, assist youth, provide scholarships, support organized charities, and promote social and civic change legislation. The organization is divided into eight intercontinental regions and more than 875 chapters are in the US, Africa, Europe, Asia, and the Caribbean. 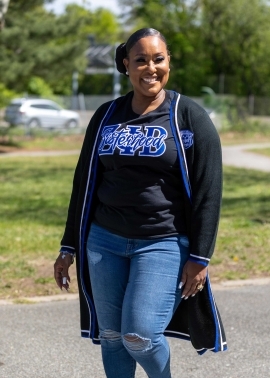 “I love my alma mater because that’s where it all began for me. It was at St. John’s that I first joined Zeta Phi Beta,” said Ms. Grant, of Cambria Heights, Queens, who joined the sorority in the Spring 1989 semester. She started as chapter historian before becoming chapter president for two years at St. John’s, where she earned a Bachelor of Arts degree in Sociology. She received an honorary doctorate in 2014 from Global Oved Dei Seminary and University in Miramar, FL.

Noting she originally wanted to become a lawyer, Ms. Grant explained, “I chose sociology as my major because I love studying people and cultures. I felt that with a deeper understanding of people, I could advocate better for them in the courtroom. I didn’t become an attorney, but I still advocate for underrepresented voices.”

Ms. Grant, whose mother raised her and her younger sister in the Bronx, NY, rose quickly through the ranks of the sorority during her college years. Among the highlights was her serving in the top National Collegiate position of national third vice president. During her tenure in that position, she provided many workshops, presentations, and keynote speeches, focusing on the areas of membership, internal structure, image, and career development.

Noting she comes from “a family of faith,” worshipping as a Full Gospel Pentecostal, Ms. Grant said, “My faith teaches me the best way to share the love of Christ is through service to others. The St. John’s Vincentian mission of helping those most in need aligned with my beliefs. This quote by Mahatma Gandhi, ‘The best way to find yourself is to lose yourself in the service of others,’ underscores the story of my life.”

“I always look for ways to serve and help others. I get so much joy from bringing joy to others,” added Ms. Grant. “Now, as International President and CEO of Zeta Phi Beta, I get to lead the service efforts of legions of women to make our community a better place.”

Ms. Grant is the recipient of the 2016 Presidential Lifetime Achievement Award for Volunteer Service from former President Barack Obama. She is an award-winning international speaker, an author, a master facilitator and trainer, and a celebrity guest host.

Her postcollege leadership accomplishments include the founding  of C&G Enterprises Unlimited, LLC in 2016. This Minority- and Women-owned Business Enterprise company focuses on providing professional services to businesses and organizations to maximize their strengths and achieve their goals in areas that include professional development training.

“St. John’s gave me the opportunity to build confidence in my voice,” said Ms. Grant. “I was enabled to develop my leadership skills as a student leader. My leadership roles also gave me the courage to step into new spaces without being intimidated.”

St. John’s provided her with a “well-rounded” education, inside and outside of the classroom, according to Ms. Grant. “There were so many options to explore a variety of interests and learn from a diverse array of student leaders, cultures, and perspectives that shaped my capacity as a leader. My extracurricular activities always included some form of service.”

“Even though it was a commuter school when I attended, I was always on campus because of my extracurricular activities,” she said, including serving as head of the Student Government Organization Congress, and as orientation leader and coordinator.

In addition to her membership in Zeta Phi Beta, Ms. Grant was active in the University’s Sociology Club and Caribbean Club, and was event chair for Haraya, St. John’s first African American student organization. She was one of the founding members of the storied Voices of Victory gospel choir. She was on the Dean’s List, was a member of the prestigious President’s Society—the University’s highest honor society—and was a recipient of the Outstanding Student Achievement Medal.

When she first arrived on campus for the first-year student summer orientation, Ms. Grant remembered feeling “both excited and nervous.” She met people that day who would become friends for life—including André McKenzie, Ph.D., Vice Provost.

“Dr. McKenzie has become my lifelong mentor and confidant, and an extended member of my family,” said Ms. Grant.

The vice provost said he is especially proud of Ms. Grant’s “devotion to family, faith, and service to others.”

“Stacie was an exceptional student leader,” said Dr. McKenzie. “The academic, personal, and spiritual growth she experienced here at St. John’s has contributed greatly to the person she is today.”