While many college-bound high school students choose a school during the final months of their senior year, Christian Hernandez ’19CPS waited just a bit longer than most to make his choice. Fortunately, the delay paid off, as his late decision to attend St. John’s not only helped him find his place in the world—it ultimately helped him land a coveted position at a top-rated, late-night talk show. 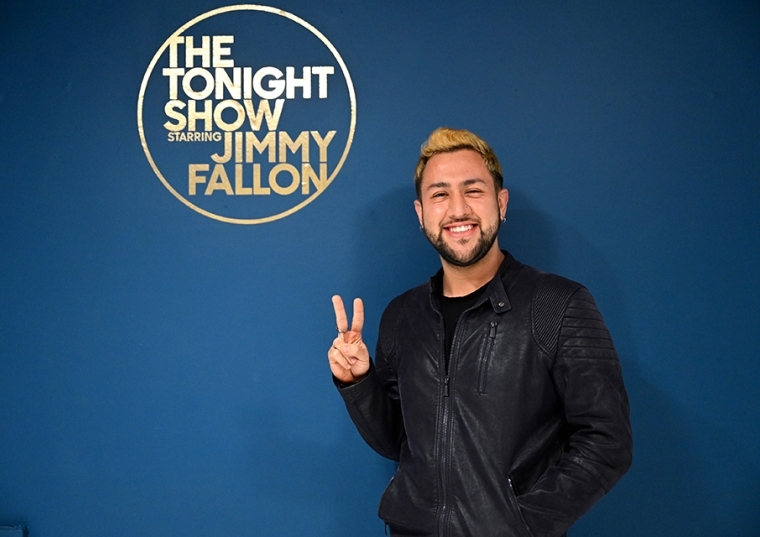 While many college-bound high school students choose a school during the final months of their senior year, Christian Hernandez ’19CPS waited just a bit longer than most to make his choice. Fortunately, the delay paid off, as his late decision to attend St. John’s not only helped him find his place in the world—it ultimately helped him land a coveted position at a top-rated, late-night talk show.

“I had some friends in high school who already decided on different fields of study,” the native of Queens, NY, explained, “but I wasn’t 100 percent sure what I wanted to do with my life.”

Without a solid plan, he pondered several options as his high school career wound down. As fate would have it, Mr. Hernandez attended nearby Bayside High School—one of several area high schools that holds graduation ceremonies at St. John’s Queens, NY, campus each year.

As he walked around the campus on graduation day, he had a bit of an epiphany—everything he wanted in a college was right there in his backyard. “That really solidified my choice in attending St. John’s.”

Two months later, Mr. Hernandez found himself back on campus as a first-year student with an undeclared major. He explored many academic options during his first year and joined numerous clubs and organizations on campus. They included WRED-TV, a student-run organization that enhances the hands-on learning experience for students with an interest in the television production process, and WSJU Radio.

“Both were fantastic resources to meet people with similar goals and aspirations, as well as learn skills in the field,” he explained.

“St. John’s is a big place, and there are so many opportunities to be active.”

Once he found his passion, he declared himself a Communication Arts major and became even more involved on campus, as he cofounded the Society for Film and Visual Arts. “I had the idea to revamp a club office that was waning in membership and completely rebrand it to form a collaborative hub of creativity,” he explained. “I pushed for a place where students could work on independent projects together. I’m happy to have been able to amass a great group of members when I started, market the club at college fairs, and launch a meaningful organization of passionate storytellers.”

According to Christian, much of his success on campus was due to the mentorship he received from his professors. “I was lucky enough to have been taught by some great professors at St. John’s, including Associate Professor Barry E. Sherman,” he recalled. “He taught my Visual Aesthetics class, and he truly made us think outside the box about style, trends, and the way we are as creative individuals.”

Seeking to complement his classroom experiences with experiential learning, Mr. Hernandez interned at NBCUniversal for five semesters, an opportunity that opened several doors for him. “By interning, I created long-lasting connections and ultimately, it changed my life,” he said. “From working in news communications, to cable marketing, to live studio productions, each taught me a skill set I’ll always value.”

After graduation, he returned to NBCUniversal as an audience assistant, working on shows such as Today, The Tonight Show Starring Jimmy Fallon, and Saturday Night Live. Today, he is an art assistant at The Tonight Show. 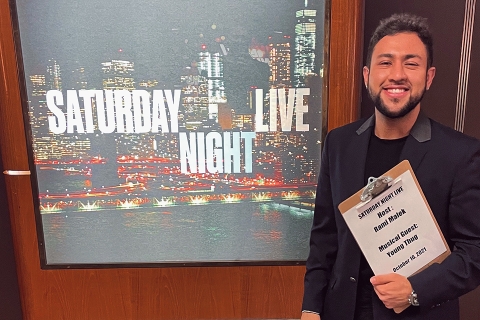 “I am the liaison between the creative departments, such as our scenic and props crews,” he explained. “I also assist with set dressing, handle all print materials, and consult on art direction for digital shoots. Ultimately, I am the right-hand man to the production designers and art directors.”

Mr. Hernandez has been involved in the visual aspects of several popular show segments, including “Freezer Secrets,” “True Confessions,” and “Box of Lies.” He attributes much of his success to a combination of perseverance and flexibility.

“Doing well in my classes showed the world that I had great promise, but I also took risks and was able to pivot when necessary,” he said. “I have always been someone who is driven and determined, and I make the most out of the opportunities presented to me.”