At first glance, Foods & Dudes is a typical cooking show. It features all of the elements of the format—friendly hosts, a state-of-the-art kitchen, premeasured ingredients, and glamour shots of the finished product. However, once you peel away the layers of the web series, it becomes clear that this creation of two St. John’s alumni is more than just a workshop in the culinary arts; it’s a master class in living life to the fullest.

“We wanted Foods & Dudes to be a platform where we could have conversations that most men are not having—especially in our community,” explained cohost Gerard Brogdon ’94SVC, ’97GEd, who launched the show in 2021 with friend and cohost Shawn Curwen ’97SVC. “While we cook, we also talk about education, finance, relationships, and raising our children—and we do it all with love.”

While the show is just over one year old, the pair has been close for the better part of 40 years.

“We’ve been friends since junior high school in Queens, NY,” Mr. Curwen explained. “I have an identical twin brother, but Gerard is definitely my ‘brother from another mother.’”

According to Mr. Brogdon, the two met—not in the cafeteria—but in band class. “He was playing the trombone, and, full disclosure, I was playing tuba,” he laughed. “Our friendship really solidified when we went to St. John’s. We pledged the Alpha Phi Alpha Fraternity, Inc. and joined student organizations together. We even met our wives (who both attended Hofstra University) when we were students. We were in each other’s weddings, and we are godparents to each other’s children.”

In short, the pair has been inseparable for the better part of their lives.

While their careers took them along different paths since college—Mr. Curwen is Director of Global Operations and Enablement with RGP, a global consulting firm, and Mr. Brogdon is a self-employed consultant—it was food that ultimately brought them together in front of the camera. 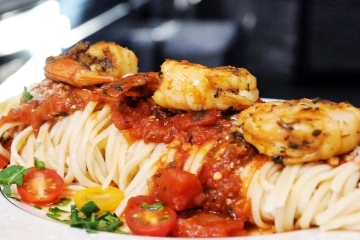 “During the pandemic in 2020, we decided to have dinners with three other couples who recovered from COVID-19. We called them ‘COVID Couples Dinners,’” Mr. Curwen explained. “Each month one of the couples hosted. Gerard cooks so well and was always over the top with his meals and presentation. My wife, Tricia, encouraged him to have his own show. She came up with the name—and Foods & Dudes was born.”

Each episode features “the dudes” and guest chefs of every level of expertise, collaborating on dishes that range from sweet (banana pudding), to spicy (jerk chicken), to savory (lamb lollipops). While the meals they craft are impressive, what is most notable are the life lessons that can be culled from each episode.

“While this show is beautifully unscripted, there is certainly a good deal of thought that goes into getting the best out of our guests,” Mr. Brogdon noted. “Once we narrow down and select the guests, we talk about what we’d like to discuss with them on camera. What is their area of expertise? Is there anything specific they really want to say?”

Guests have included an incredibly diverse roster of would-be chefs, including finance professionals, a Christian minister, a legend in professional basketball player development, and one bona fide African prince. While each has brought his own level of cooking knowledge to the Foods & Dudes kitchen, they are all passionate about improving the world around them by providing mentorship and guidance.

“At St. John’s, I learned how to relate to people from all walks of life,” Mr. Curwen noted. “Learning how to celebrate differences and understand the nuances of different cultures has served me well over the years. It’s been a lifelong learning process, but the importance of recognizing diversity as a good thing began when I was in college.”

Mr. Brogdon agreed. “This was a time when I learned that working with people who didn’t share my life experiences was not as much challenging as it was rewarding. Once you actually meet people, you realize that while we all have our specific concerns, there is far more that unites us than divides us.”

André McKenzie, Ed.D., Vice Provost and Interim Chief Diversity Officer, St. John’s University, has fond memories of the pair. “I remember Shawn and Gerard for their deep involvement in campus life and the enthusiasm they demonstrated in their academic and extracurricular pursuits,” he said. “It pleases me to know that the friendship that led to their successful collaboration was nurtured and cemented here at St. John’s.”

The passion project of these two longtime friends is quickly making a name for itself, thanks to their appearances on Today in New York, Baking It, and, most recently, The Kelly Clarkson Show. Ms. Clarkson gave Foods & Dudes her “#What I’m Liking” stamp of approval, as she exclaimed, “I love these guys so much. They’re amazing!”

While the pair is new to the spotlight, Mr. Brogdon admitted that his love of cooking is due in part to the praise often lavished upon chefs. “When I was younger, I always noticed that the person at a BBQ working the grill got all of the attention. At Thanksgiving, the person at the stove got all of the attention,” he laughed. “No matter what, it always seemed like the kitchen is where people congregate.”

Similarly, Mr. Curwen’s affinity for the kitchen is long-standing. “My dad cooked when I was little, so I guess it put me in the mindset that men can and do cook,” he recalled. “Cooking is more than making a meal—it’s about sharing love.”