Timm Woods ‘15G, ‘17Ph.D. has built a career as an educator and professional “game master,” using table-top role-playing games like Dungeons and Dragons to encourage the development of a range of social and intellectual skills. His work has been the focus of various prominent media outlets. Most recently, he was invited by the U.S. Navy to develop games for training sailors in high-level strategy aboard submarines.

Dr. Woods’s dissertation, “Anything Can Be Attempted: Table-Top Role-Playing Games as Learning and Pedagogy,” explored the educational history and potential of these social games, and offered a look at how to structure a classroom around the model of a tabletop role-playing game. His dissertation committee consisted of Granville Ganter, Ph.D., Anne Ellen Geller, Ph.D., and Shanté Paradigm Smalls, Ph.D. 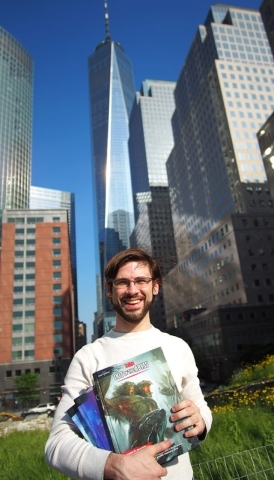 As an undergraduate English major at Loyola University, Dr. Woods wanted to become a teacher. He taught abroad in Thailand for one year and “fell in love” with teaching, developing an after school program to observe how students there interacted with games.

As a graduate student at St. John’s, Dr. Woods chose a dissertation topic that evoked his passions: the intersections between gaming and education. “Dr. Ganter helped me make that connection in our Introduction to the Profession course,” he said. "He asked what I was interested in, and recognized that I had found the seed of something worth exploring."

Once embarked on his research, Dr. Woods quickly became an expert in this niche area of inquiry. “The more research I did, the more I realized needed to be done,” he said. “There is a vast, untapped approach to education in gaming. Mainstream attention tends to focus on the exploitative and addictive aspects of gaming, rather than the elements which make games so universally appealing in the first place: their vast potential for self-actualization and education.”

While completing his Ph.D., Dr. Woods began working at The Brooklyn Strategist, a board game café in Brooklyn, NY founded by a clinical psychologist and neuroscientist. The café promotes education through board games and was therefore an obvious fit for Dr. Woods. Later, he began working freelance as an independent educator running afterschool programs. Many of his students have some level of special needs, and while they easily learn the rules of gaming, they sometimes struggle with its social aspects. The games offer them an opportunity to develop more social skills. Dr. Woods also leads games for adult learners, helping them improve critical thinking, creativity, morality, community-building, and many other skills that are inherent aspects of the role-playing game experience.

“Games educate adults in ways that their jobs may not,” he said. “They help train our minds to grow and mature.” 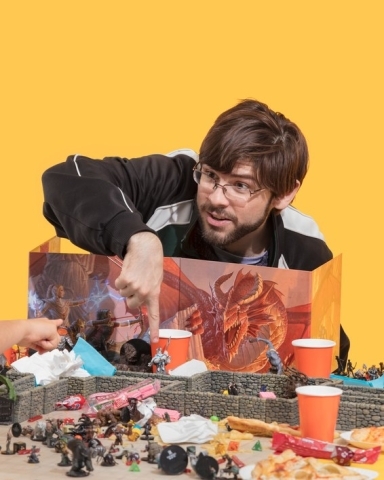 Part of this skill-building aspect of table-top role-playing games come from their open-ended nature, according to Dr. Woods: “Dungeons and Dragons offers an open-ended realm of possibility. You learn how to respond to a scenario and negotiate a solution.” They also require little to no technology, making them more accessible and conducive to creativity than computer-based games. “We have for too long conflated technology and games,” he said. “Human imagination is the best technology available.”

The verbal and social aspects of game design made Dr. Woods’s background in English an ideal credential for the forward momentum of his career. “The Ph.D. really affected the way my career panned out,” he said. “I have found that a lot of the game design world is roughly split between computer science and English backgrounds. My specialty is in verbal, social-based games like Dungeons and Dragons and other role-play games where communication and language drive gameplay.”

Dr. Woods’s work has been featured in various media outlets, including ABC, Wired, and GQ. You can learn more about him at www.timmwoods.com.