Charles Broadway ’94CBA’s journey to becoming the first African-American Chief of Police in Clermont, FL, began at St. John’s University. A Management major, Chief Broadway reflects on the many lessons he learned at St. John’s that serve him well today.

“I am basically the chief executive officer of an agency,” he recently observed. “Through my course work, I learned how to be a manager and a leader in law enforcement, and how to manage a large budget. I took Philosophy courses that really prepared me for dealing with people, the community at large, and my officers.”

Chief Broadway is also grateful for learning the art of public speaking at St. John’s. He usually has at least one speaking engagement a month, which can include a high school and/or college commencement, police academy graduation, panel discussion, or speech at a civic engagement.

“I always wanted to be a police officer and join a profession that was bigger than me, where I could make a difference in the lives of people and my community,” he said. “This is my passion.”

A native of North Babylon, NY, Chief Broadway chose St. John’s for a variety of reasons. “I preferred to stay local. I liked the proximity to New York City and the diversity of the student body,” he recalled. His overall goal was a career in law enforcement; business was another potential career path. St. John’s had a football program at the time, and he eventually played on the team.

“One of the reasons I chose St. John’s,” Chief Broadway offered, “was its mission of service and embracing one another.” A Christian, he respected the fact that St. John’s engaged in dialogue with different religious traditions. “I believe that is very important.”

Chief Broadway graduated from St. John’s in 1994 and from the New York City Police Department (NYPD) Police Academy in 1996. Shortly thereafter, he was promoted to detective, and during this time he was a first responder after the terrorist attacks of September 11, 2001. “I saw the unimaginable that day,” he recalled. He participated in search and recovery efforts during the days and weeks that followed, and lost several friends on that day and in the ensuing years.

Chief Broadway opted to retire from the NYPD in 2002 after his parents relocated to Florida for health reasons. He got a job with the City of Gainesville Police Department in Gainesville, FL, where he was again promoted to detective. After, he was hired by the Florida Department of Law Enforcement as a special agent, where he investigated multijurisdictional violent crimes, and conducted investigations into human trafficking, narcotics, and gang activity.

He was promoted to special agent supervisor, with oversight over several investigative functions. This included the agency’s Public Integrity Unit, which encompassed investigations of alleged misconduct of public officials and all police-involved shootings in the Central Florida region. Chief Broadway joined the Clermont Police Department in 2010 as a captain for the Patrol Division and was appointed Chief of Police in 2012.

One of Chief Broadway’s first official acts was to appoint a police chaplain. “I felt that I needed that spiritual counsel, both for myself and for the agency,” he observed. “The chaplain helps us and the community.”

Chief Broadway is a staunch advocate of community policing. “Obviously, one of my main goals is reducing crime. I believe that the agency is more effective and more efficient when cops and community members work together.” He noted that Clermont has seen a reduction in crime as a result. “We have established a great depth of trust between police and the community.”

Another model that Chief Broadway subscribes to is intelligence-led policing, which he described as tracking crime through patterns, methods of operation, and data analysis. “We compile that data, and examine it on a daily basis so we can deploy our resources efficiently.” 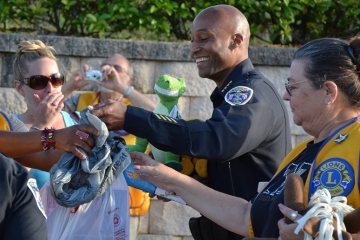 Meetings are a large part of Chief Broadway’s daily routine, and he welcomes the community engagement. Before being interviewed for this article, he had just returned from a breakfast meeting with Clermont residents. “These quarterly get-togethers are very informal. Everyone is invited. We discuss issues and concerns, and we have an open dialogue.”

“I'm a people person. I enjoy being around people, and I enjoy being out and about,” Chief Broadway asserted. “I wear the uniform every day, and I believe that brings pride to the agency, and it shows the men and woman that work for me that I care about our success.”