A speech-language pathologist, Barbara O’Connor Wells, Ph.D., CCC-SLP, ’94C, ’94G, was shocked to learn there were few resources available to the adult caregivers of patients she treated who suffered from communication problems related to brain injury or disease. 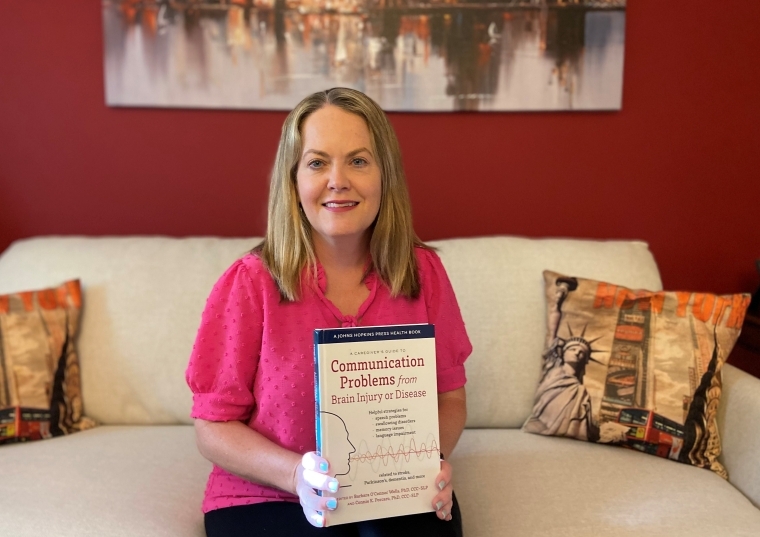 A speech-language pathologist, Barbara O’Connor Wells, Ph.D., CCC-SLP, ’94C, ’94G, was shocked to learn there were few resources available to the adult caregivers of patients she treated who suffered from communication problems related to brain injury or disease.

Along with a colleague, Dr. O’Connor Wells recently published A Caregiver’s Guide to Communication Problems from Brain Injury or Disease, an all-in-one book written in layman’s terms specifically for caregivers of persons impacted by brain injury or degenerative diseases. Each chapter contains helpful case studies, tips, and resources, so readers are well informed about their family member’s communication, memory, or swallowing challenges.

A few years ago, one of her colleagues published a book for parents of children with speech and language problems. “She noted that there really wasn’t a book out there written for family members,” Dr. O’Connor Wells explained. “I started thinking about the family members of my patients, who have had a stroke, traumatic brain injury, or advancing Parkinson’s disease, and what they need.”

What Dr. O’Connor Wells found that her profession “wasn’t fully represented in what was being published,” she stressed, adding that she decided it was important to develop a comprehensive resource for caregivers to fill this void.

She approached colleague Connie K. Porcaro, Ph.D., CCC-SLP, Associate Professor, Department of Communication Sciences and Disorders, Florida Atlantic University, and they collaborated on the book. Dr. O’Connor Wells and Dr. Porcaro co-edited eand co-authored the book, and they prevailed upon several colleagues to write chapters in their areas of expertise.

The book addresses speech, language, voice, memory, and swallowing impairments. “We even have a chapter that helps caregivers distinguish disorders for healthy aging, and what to expect when we age, such as changes in hearing, swallowing, voice, etc. The book moves readers through the disorders in which we actively work. It has a far reach in terms of who it can help.”

Dr. O’Connor Wells currently serves as an Associate Professor in the Department of Speech-Language Pathology at Nova Southeastern University in Fort Lauderdale, FL, and spent a large portion of her early career in hospital settings. “I consider myself to be a medical speech-language pathologist, but I’ve also been in schools, universities, home care, and private practice.” She added, “I’ve worked with patients across the lifespan, from birth to end of life.”

Dr. O’Connor Wells lists among her areas of clinical and research expertise, dysphagia, or swallowing disorders. “I first became interested in dysphagia during a course I took at St. John’s.” My passion for this topic was enhanced by my externship experiences during my graduate studies”. Other research interests include post-stroke language deficits (aphasia) and cognitive disorders.

A daughter of Irish Catholic immigrants, Dr. O’Connor Wells noted that being educated in the Catholic tradition was important to her and her parents. She went to Catholic grammar and high schools, and, after one year at Pace University, she realized how much she missed the Catholic aspect of her schooling.

“I had several friends who were at St. John’s, and at that time I was deciding on Speech- Language Pathology and Audiology as my major. I knew St. John’s had a strong program for that,” she recalled. “Thankfully, they offered me a transfer scholarship, and I loved the experience so much I stayed there for graduate school.”

While at Pace, Dr. O’Connor Wells took a public speaking course that included a competition involving the International Phonetic Alphabet (IPA). She won the competition and her instructor suggested speech-language pathology as a possible major.

“I had never considered that, but I knew I wanted to be in profession where I could help people and make a difference in their lives. I fell in love with the description, and I never looked back.”

“The entire faculty at St. John’s was amazing,” Dr. O’Connor Wells explained when asked if any one member served as an inspiration. “That’s why I stayed for my master’s degree.”

She listed former professors Nancy Eng, Ph.D., Nancy S. McGarr, Ph.D., and Frederika Bell-Berti, Ph.D., from the Department of Communication Sciences and Disorders, as faculty who were strong influences in her career and eventual decision to pursue doctoral studies. “I loved our program. I couldn’t leave,” Dr. O’Connor Wells stressed, adding that it was her St. John’s training that enabled her to get her first “dream job” right out of graduate school.

“Being a student at St. John’s enriched my life as a Catholic,” she noted. “As a commuter student, I never felt in any way deprived. We had amazing classes, a beautiful campus, and a great social scene. I was very involved on campus. We had so many fun events I helped organize.”

Dr. O’Connor Wells was a member of the Chappell Players, Student Union, The Irish Society, and the Skull and Circle Honor Society. “I look back on my St. John’s years very fondly. I say we put the ‘unity’ in ‘community.”’

As for the book, Dr. O’Connor Wells is pleased with the response to it so far, which she termed as very enthusiastic. “If we help only one other person suffering from communication, memory, or swallowing challenges caused by Parkinson’s disease, stroke, traumatic brain injury or other neurological condition, then we’ve done our job.”