Peter Feuerherd, an adjunct professor of journalism at St. John’s University, has been appointed news editor for the National Catholic Reporter (NCR). 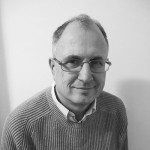 Peter Feuerherd, an adjunct professor of journalism at St. John’s University, has been appointed news editor for the National Catholic Reporter (NCR).

NCR, based in Kansas City, Missouri, is an independent Catholic news website and print newspaper. Feuerherd will work as news editor from his home in Rego Park, Queens.

Feuerherd was formerly a correspondent for the NCR Field Hospital feature, an ongoing series on parish life in the United States and Canada. He is a veteran of the Catholic and religious press, having written for Commonweal, St. Anthony Messenger, and diocesan newspapers in Indianapolis, Cincinnati, Detroit, Albany, Long Island and New York City. Feuerherd is the winner of numerous Catholic Press Association and religious press awards and is the author of "Holy Land USA: A Catholic Ride Through America's Evangelical Landscape" (Crossroad). He is also the author of the newly released “The Radical Gospel of Bishop Thomas Gumbleton,” (Orbis), a reflection on the life of the social activist and auxiliary bishop of Detroit.