St. John’s University’s Catholic Scholars is more than a program designed to produce young Catholic leaders. In several cases, it has led to lifelong romantic relationships and friendships that model God’s love for all.

The program offers students a $5,000 scholarship for each of their four years of study. Students demonstrate a commitment to living the Catholic tradition through leadership and excellence. They are part of a multidisciplinary cohort who join professors and campus ministers in monthly meetings, lectures, retreats, courses, and prayer experiences that integrate faith, reason, and service.

In honor of Valentine’s Day, here are a few of the special relationships that have resulted from Catholic Scholars. 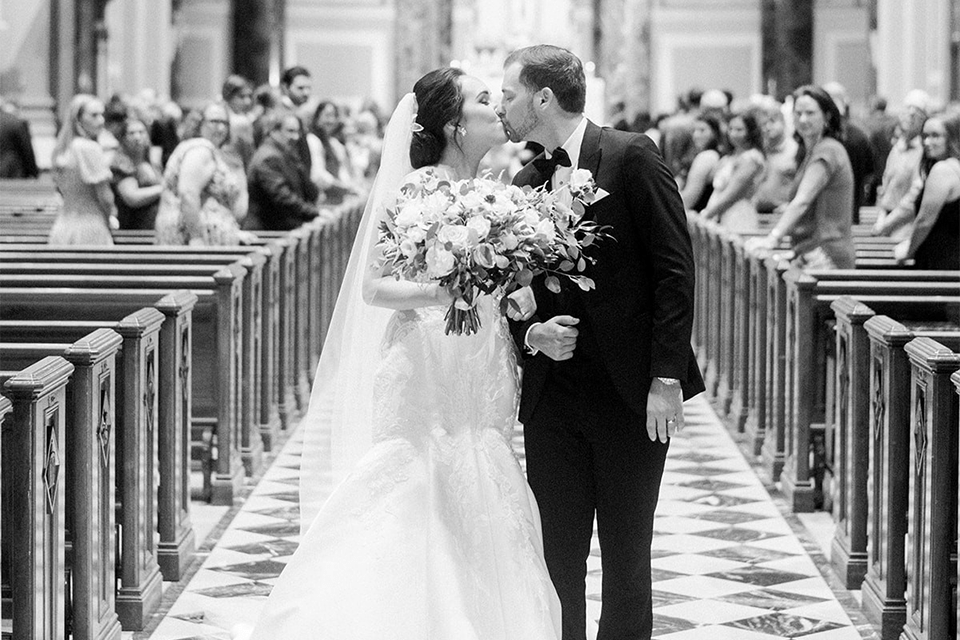 “My mom attended evening classes at St. John’s and actually went into labor with me in a classroom during her last final,” explained Mr. DeBiase, whose family includes a long line of Johnnies. “Even though she was having severe contractions, she was determined to finish her final. Her professor had to practically throw her out of the room.”

Fortunately, his mom completed the exam and made it safely to nearby Long Island Jewish Hospital (now Long Island Jewish Medical Center/Northwell Health) for the delivery. “St. John’s was basically a second home for me—and it was almost my first.”

While Mr. DeBiase was raised in Middle Village, NY, a stone’s throw from St. John’s, Mrs. DeBiase grew up 70 miles southwest of campus in Princeton, NJ.

“I loved that St. John’s has a true campus to enjoy, but I could also get on the train and be in Manhattan in minutes,” she said, explaining her decision to attend St. John’s.

She first discovered Catholic Scholars during a campus tour and thought it would be a great way to get involved on campus. Mr. DeBiase learned about the program through the guidance office at Archbishop Molloy High School, which he attended.

“I was already a CYO coach and youth leader in my parish, so I felt it would be a good fit for me,” he noted.

“We actually met the first night of the Catholic Scholars opening retreat,” Mrs. DeBiase explained. “It’s crazy to look back now and see we had no idea what was in the plans for us!”

The couple has been inseparable ever since—and part of the tightly knit family of Catholic Scholars.

“Every time we had a formation meeting, an event, or went to Mass, it just felt like you were among family,” she explained. “It was really special to feel part of a community from day one.”

When they wed on August 28, 2021, at the Cathedral Basilica of Saints Peter and Paul in Philadelphia, PA, countless members of the St. John’s community made the trip to attend, including Rev. Patrick S. L. Flanagan, C.M., Ph.D., Associate Professor, Theology and Religious Studies, St. John’s College of Liberal Arts and Sciences, and Vice Chair, St. John’s Board of Governors, who performed the ceremony.

“Theirs is a true St. John’s love story, one we hear over and over again,” Fr. Flanagan recalled. “It’s only by happenstance that they both were awarded places as Catholic Scholars. I met them when I gave a presentation to this select group of students, and their love and affection for each other were obvious to me.”

While the alumni couple is three years removed from their days as St. John’s students, they were both drawn to careers where they could continue to live the Vincentian mission they learned here. Mr. DeBiase is an attorney for the Tunnel to Towers Foundation, while Mrs. DeBiase is a research coordinator at Johnson & Johnson.

“Every day, I go to work knowing I help those who have helped others,” he explained. “Going to work is no longer a job, it’s a mission.”

Mrs. DeBiase expressed similar feelings about her career. “Our work is guided by our credo that challenges us to put the needs and well-being of the people we serve first,” she said. “I feel lucky to work for a company that shares some of my own personal values—many of which were strengthened at St. John’s.” 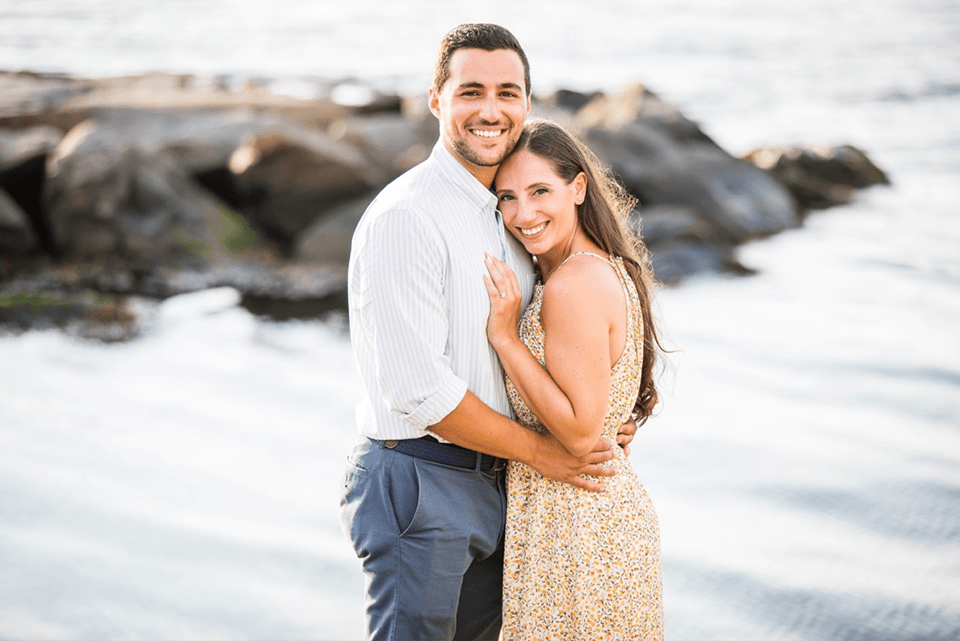 “We were both drawn to St. John’s for the University’s reputation, connection to professionals and internship opportunities in our fields, as well as its Catholic tradition and dedication to service,” Ms. Marino recently said.

The couple plans to wed in 2023. Ms. Marino is Manager, Current Series Animation, Consumer Marketing, for Nickelodeon, and Mr. DiMaria serves as an Account Executive at Prosek Partners, a financial services firm.

The pair met and would see each other during monthly Catholic Scholars meetings and service events. “It was not until our junior year Study Abroad experience in Rome, Italy, that our relationship took form,” Ms. Marino recalled.

“During our first few weeks studying abroad, we had the time to develop a meaningful relationship and eventually started dating. That would not have been possible since we attended two different campuses. From there, we traveled Europe together, trying every plate of pasta and coffee,”—something, she said, they continue to enjoy today on the local level.

Their shared faith is the foundation of their relationship. Along with on-campus and local service through the Society of St. Vincent de Paul, the couple traveled together to Lourdes, France, for a Campus Ministry plunge.

“Through service, we learned that we hold the same values close to our hearts,” she said. The pair are mentors with the Aspire program, which supports ambitious students striving to reach their professional goals through a one-on-one mentor relationship. Ms. Marino is a frequent speaker for the Women in Business program on the Staten Island campus.

Mr. DiMaria said, “Our St. John’s experience helped mold us into the individuals and couple we are today. St. John’s had a major impact on us academically, professionally, and personally.” 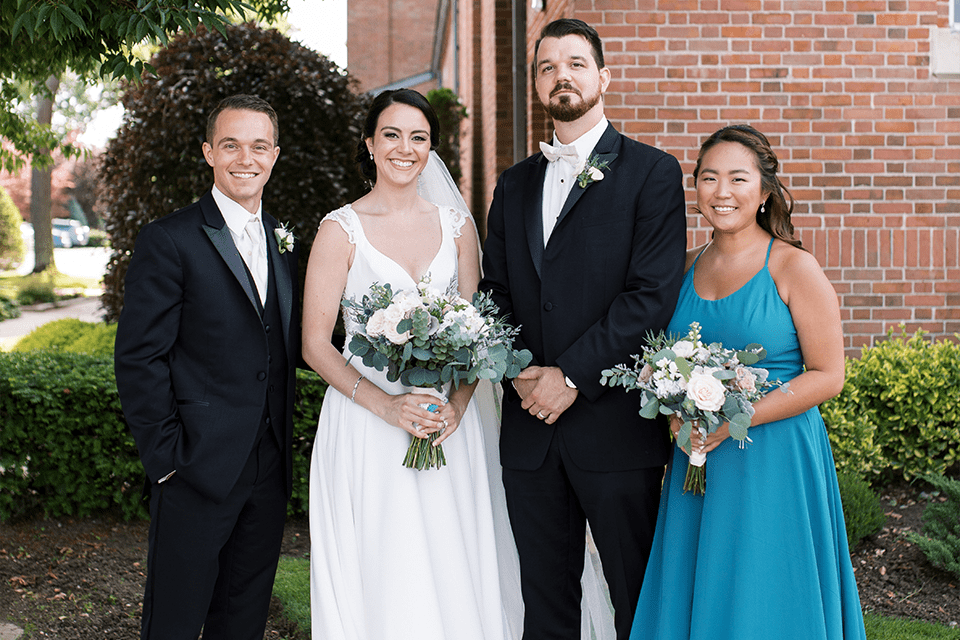 They knew each other only slightly as kids, growing up in Levittown, NY, and attending the same Catholic grammar school.

It wasn’t until years later that Theresa LoCascio Haslbauer ’17CPS and Rose Haslbauer ’19C, ’20G became reacquainted after they both entered the Catholic Scholars program as first-year students at St. John’s University. That shared route would lead to a close friendship—which was further deepened when they became sisters-in-law, the result of Theresa marrying Rose’s brother, Daniel. The two also shared similar career routes to become high school theology teachers.

But in the early days of their acquaintance, said Rose, “Theresa was in the grade above me in elementary school, and I knew her by her nickname at the time, which was T-Lo, but our paths didn’t ever cross much, and we went to different high schools.”

During the summer before their first year of college, Rose worked at a Panera Bread restaurant and spotted Theresa there a few times, dining with friends or family. “I never said ‘Hi,’ but I knew it was T-Lo.”

The two girls reconnected at St. John’s at the start of their first year during an opening prayer service, where Rose, again, spotted Theresa. “At one of the breaks, I went up to her and reintroduced myself, saying something along the lines of, ‘Hi, I’m Rose, I went to Holy Family School, and I made your smoothies at Panera.’ The rest is history!”

According to Theresa, “I formally met Rose through Catholic Scholars because she was interested in the same Campus Ministry groups as I was. It was through service opportunities and socials that our friendship took flight.”

“At St. John’s Campus Ministry events, Rose was friendly and easy to talk to,” Theresa added. “Our friendship was basically immediate because we knew we valued the same thing—that is, having a relationship with Christ.”

Rose was able to grow in her Catholic faith through talks, meetings, and retreats that Theresa helped run.

“Our friendship blossomed as it went from acquaintances to friends, to the person dating my brother who was also my friend, to sisters-in-law,” Rose said. “We grew together, not only as friends but as individuals of faith, which was very beautiful.”

Although the pair became close through Catholic Scholars, it wasn’t Rose who introduced her brother and Theresa. The couple met at a separate Catholic event on Long Island, NY, and started dating soon after becoming friends.

“I remember that Theresa and I had a 9 a.m. theology class together during one of the first semesters that she and Dan were dating. I would come home from that class to find her already at my house to visit Dan,” Rose said.

“I think that in seeing her flourish through Campus Ministry and Catholic Scholars, I realized that she was someone who was well-suited for my brother,” said Rose. “I wanted to see her grow with him. I don’t think I would be able to recognize that in the same way had it not been for Catholic Scholars weaving our lives together in the way that it did.”

New Student Orientation Is a Welcoming Tradition at St. John’s

New Vice President for Equity and Inclusion is Energized