eSports is a worldwide phenomenon that has gripped the online gaming world for the last 20 years. In that time, online gaming has experienced an exponential growth in popularity, and St. John’s University has recognized its importance by creating a vibrant eSports program designed to give student gamers a competitive edge in this emerging field.

The University is a powerhouse contender in BIG EAST eSports tournament play. Last month, St. John’s won the BIG EAST title in the College League of Legends Fall Invitational, defeating second seed Seton Hall University, 2–0. The Red Storm went unbeaten in the tournament with a perfect 4–0 record and did not surrender a point.

As champion, the Red Storm was selected to take part in the next round of the College League of Legends Fall Invitational Championship hosted by Riot Games. The St. John’s League of Legends team is the top seed in the conference.

Luis Ramos, Information Security Analyst in the Office of Information Technology at St. John’s and eSports General Manager, noted that the University’s participation in eSports tournaments has increased to five titles through its membership in the Electronic Gaming Federation Inc. (EGF). “They are responsible for coordinating and setting up the matches with other schools and running the production,” Mr. Ramos explained. 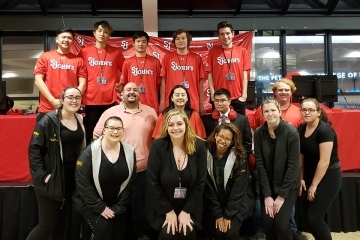 He added that the University expanded its number of available game tournaments (which will extend into 2021) to help students stay engaged with one another during the transition to remote learning last spring. “We are looking for more opportunities with EGF to allow for casual play, so even if you are not a high-end player, you can still participate if you have a passion for a particular title.”

In 2019, Mr. Ramos noted that more than 200 students attended an on-campus viewing party for a tournament. With the pivot toward more virtual events, he hopes to maintain that level of engagement.

eSports at St. John’s is also engaging with the University’s Vincentian mission, Mr. Ramos stressed. Presently, the three American Vincentian universities -- St. John’s, DePaul University, and Niagara University -- are developing the Vincentian Cup, a tournament in which they will play each other, with any funds raised split among the three schools and donated to worthy causes.

The tournament is currently scheduled to be held online December 9–12; a different game will be played each day. Student interviews will be filmed in which they discuss the Vincentian mission and what it means to them, and those interviews will be featured during the lead-in to each day’s game play.

“I love putting the teams together,” Mr. Ramos said. “Reaching out to students who express a passion for a certain game, offering them this opportunity to be on a team, and then seeing leaders emerge on these teams, is very satisfying and gratifying.”

Mathematics major Nicolas Delatour has loved online gaming since he was a young child. “It has been a huge part of my life,” he stressed. “I am always trying to improve each day, and I feel like the opposition is getting better, which makes me want to grind more. I get extremely competitive, so gaming is my outlet for that.” 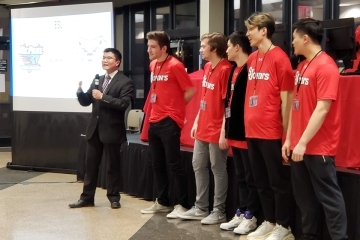 Nicolas, a first-year student, added, “It means a lot to me to be on this team. They are all great people, and talking and playing with them is fun. I love that there is a community of people at St. John’s who enjoys the same things I do.”

Marc-Olivier Etienne, a junior Computer Science major, founded a gaming club which prominently featured eSports games at Xaverian High School in Brooklyn, NY. He has done likewise at St. John’s. “Between studies and my personal life, being on a team and working on the organization is difficult, but it is a labor of love,” he said.

“I think it is essential that eSports—a field that is accessible to everyone regardless of physical ability or cultural background—is available at every university, as it is at St. John’s. I do not know anything that has brought people together the way eSports and video games have.”