Throughout his 98 years, Edward Toriello, Sr. ’44C has seen the best and the worst of life. Five months after graduating from St. John’s University in August of 1944, he found himself in the Ardennes Forest fighting the Battle of the Bulge under the command of General George S. Patton.

Mr. Toriello survived the historic battle, in which more than 100,000 US lives were lost, and eventually returned to civilian life, where he became a devoted husband and father. He has never forgotten the bravery on display during that brutal campaign and is quick to remind anyone who asks that the men who lost their lives are the true heroes. 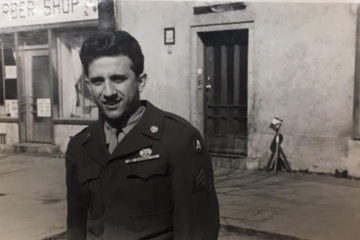 Although born in the Bronx, NY, his family moved to Brooklyn when he was four years old. From a devoutly religious Italian family, Mr. Toriello learned the importance of faith from an early age. He served as an altar boy at St. Rosalie’s Parish in Bay Ridge and originally felt a call to the priesthood. Mr. Toriello attended Cathedral Preparatory School and Seminary in Brooklyn before coming to St. John’s (which was also located in Brooklyn at the time).

While studying for the priesthood, Mr. Toriello was exempt from the draft. “However, about six months before I graduated, I told the rector that I did not believe I had a strong enough vocation,” he recalled. Ten days after graduation, he was in Fort Dix, NJ, for basic training and eventually was assigned to a combat rifle company in the 76th Infantry Division, 417th Regiment, Third Army, as a combat medic and combat infantryman.

Mr. Toriello eventually made his way to Germany, where he said, “All hell broke loose. It was one battle after another. I saw the worst of war that anyone could witness. I saw death at my fingertips, and the wounded were everywhere.”

Chosen by his commander to be a scout (i.e., an advance reconnaissance soldier who typically draws fire), Mr. Toriello is incredulous that he was never wounded and credits the prayers of his mother for his safety. “I am a survivor,” he observed.

Mr. Toriello earned three battle stars during the Battle of the Bulge, “and that is something you can be very proud of,” he stressed. His company advanced through Germany, eventually reaching Berlin. After the surrender of Germany, Mr. Toriello was assigned to the temporary military government and posted in Munich, Germany, as a chief clerk.

Despite an offer to attend officer’s training school, Mr. Toriello was desperate to return home and was discharged in July 1946. Initially, he wanted to go to law school, but opted to join the New York Telephone Company and then the Metropolitan Life Insurance Company.

At the Telephone Company he met his future wife, Zina, whom he hired as a secretary. They started courting after an office Christmas party, eventually marrying and raising six sons together. The Toriellos were married for 65 years when Mrs. Toriello passed away in 2013. Mr. Toriello retired from Metropolitan Life in 1977, becoming a partner at Zack Insurance Agency LLC in Ship Bottom, NJ. 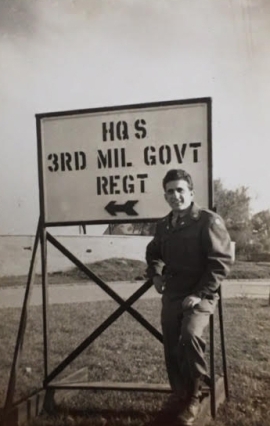 Over the years, Mr. Toriello became extremely active in community organizations, serving as Commander of the Bay Ridge Post of the Veterans of Foreign Wars, and President of the Kiwanis Club of Long Beach Island. He served as an officer and is a lifetime member of the Knights of Columbus and was President of several local Italian American clubs. He and his family settled in Manahawkin, NJ, in a home he still lives in to this day. “I met a lot of nice people along the way. We had a wonderful life.”

Mr. Toriello was a member of the Board of Directors of the Southern Ocean County Medical Center for many years and was directly responsible for raising more than $100,000 for the hospital through a series of annual benefit concerts.

His son, Edward Jr., is a prominent orthopedic surgeon, and his son John attended St. John’s School of Law. The other brothers are engaged as a professional musician, college instructor, graphic designer, and insurance salesman. “To this day, the six boys are glued together. I am so blessed with this beautiful family. It was all part of meeting Zina, the queen of our family. She was a great mother and wife.”

Recalling his days at St. John’s, Mr. Toriello was devoted to the men’s basketball team and followed them everywhere. “I had a lot of friends on the team,” and no matter where they played, Mr. Toriello would drive to the games, many of which were played at Madison Square Garden. He noted that many of his classmates became friends for life. He remains a proud member of the Alumni Association.

Mr. Toriello said his years of wartime service remain a very vivid memory. “They were years I spent serving my country and preserving the freedom we enjoy in this country. I have been blessed by the Lord, who I thank every day for my life and the blessings that made it all possible.”