For the brothers of Sigma Chi Upsilon fraternity at St. John’s University, the tragedy of September 11, 2001, will always elicit an especially poignant memory. It was on that terrible day that three of the fraternity’s alumni—Mark “Sparky” Broderick ’83CBA, Brian Cannizzaro ’93NDC, and Louis V. Fersini, Jr.—perished in the collapse of the World Trade Center.

For Christopher Porcu ’85NDC, that memory is particularly heartbreaking. As a sergeant in the New York City Police Department, he was among the thousands of first responders who were summoned to the scene. He later found out that three of his fraternity brothers were buried in the rubble.

“One of my fraternity brothers called to see if I was OK, and told me that Louie was missing. That was the first person I heard of who was missing. In the days that went by, I found out that Mark and Brian were also unaccounted for and presumed dead. Sadly, that presumption turned out to be correct.”

For decades, the fraternity alumni association, of which Mr. Porcu serves as Chairman, met annually at a local venue in the Wall Street area every September for an alumni reunion. With a history dating back to 1932 at St. John’s University, dozens of brothers spanning several generations typically attended each annual reunion. Obviously, the 2001 reunion was postponed, but when it was subsequently held in November, more than 200 brothers attended, with the intent to pay their respects to their fallen brethren. 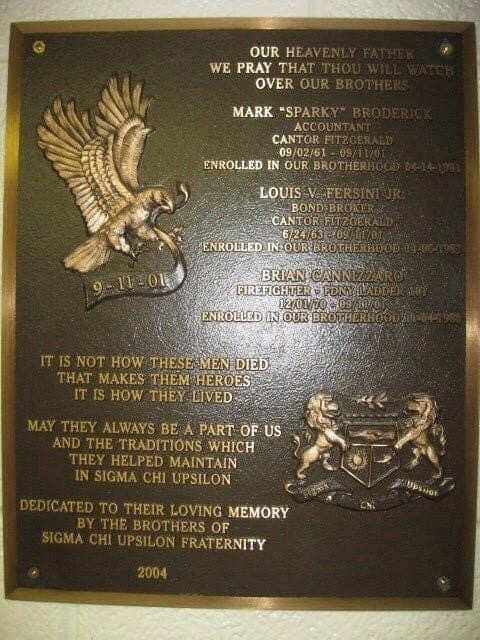 There was much talk about doing something to memorialize their three departed fraternity brothers. As students, they recalled seeing a plaque on campus memorializing two brothers of their fraternity who were killed in action during WW II, as well as a plaque honoring the memory of a brother from another fraternity who had been killed in Vietnam.

Together, a group of them decided to solicit funds to create a similar plaque to be placed in the Campus Center on the Staten Island, NY, campus so that the University family would never forget Mr. Broderick, Mr. Cannizarro, and Mr. Fersini.

The response to their solicitation for funds was overwhelming. “Everyone was so wonderful,” he noted, “and not just the brothers who knew Mark, Louie, and Brian. The alumni association even received a letter from a gentleman who pledged the fraternity in the early 1940s. He was 90 years old, but wanted to do his part. He contributed five dollars, which was all that he could afford.”

The brothers responded generously, and soon their donations greatly exceeded what was needed to create the plaque. With the surplus money collected by the Sigma Chi Upsilon Alumni Association,  The Sigma Chi Upsilon 09/11 Memorial Scholarship Fund was established in 2005 (and endowed in 2009) in memory of Mr. Broderick, Mr. Cannizarro, and Mr. Fersini.

“The original goal of the scholarship was to grow the endowment so that annual returns could fund a partial scholarship in each grade of each academic year,” recalled Mr. Porcu. “Obviously, the size of the endowment would dictate how much would be distributed to each recipient; however, the desire was to fund simultaneous awards to a qualifying first-year student, sophomore, junior, and senior over the four years (eight semesters) of a traditional education.”

To date, the endowment has funded three annual distributions in years 2018–19, 2019–20, and 2020–21 to its first scholarship recipient. Christian John Porcu is currently enrolled in his third year of the six-year Doctor of Pharmacy program at St. John’s.

Making a difference for others has always been important for the brothers of Sigma Chi Upsilon, both in their professional and personal lives. Mr. Porcu credits the University for instilling the Vincentian philosophy of caring for those in need that has remained with them to this day.

“The Vincentian way is to give back. We are St. John’s, and that is what we are all about. This scholarship is a way to help the young people who are on campus today, and will ultimately be following in our footsteps and making their own difference in the world for years to come. I cannot think of a more fitting tribute to Mark, Louie, and Brian.”

In keeping with that philosophy of giving back, Mr. Porcu was recently contacted by several members of the alumni association’s executive board. The treasury had accumulated a surplus amount of funds over the last few years, and the suggestion was made to put that money to good use. “It seemed most appropriate to donate that money toward the endowment so that future generations can benefit,” he said.

To make a gift to the Sigma Chi Upsilon 9/11 Memorial Scholarship, please visit www.stjohns.edu/911funds to make a secure online donation.

Alumnus Fosters Community Spirit On and Off the Field